Nicolas Huchet has a sweet bionic arm. A team of hackers called Hackerloop developed a bionic NERF Gun for Nicolas, who was left with a myoelectric prosthetic hand after an accident. Presumably they started off by saying, “Gentlemen, we can rebuild him.” The gun is designed to attach to his amputated arm and fire with muscle contraction. Now he’s armed and slightly dangerous. 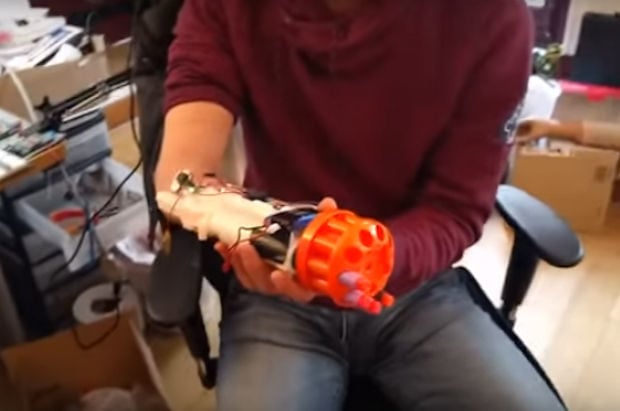 This gun can fire foam balls on command. It’s connected with an electromyogram (EMG) sensor and also uses an Arduino circuit board. When Nicolas contracts the muscles on his forearm, a sensor on the prosthetic measures electrical activity. Then the gun shoots foam projectiles and stops shooting when the electrical signals lower below the threshold.

Nicolas must feel like an awesome cyborg. Hackerloop are definitely some cool friends. The NERF gun prosthetic is just a prototype for the momen, but they plan to release the completed product next month.

[via Motherboard via Damn Geeky]