When the Chevy Bolt first burst onto the scene as a concept back in January 2015, I figured that it would be at least a few years out, given the promise of a fully-electric car that could drive over 200 miles on a charge, carry five passengers, and cost under $30,000 (after tax credits.) Fast-forward less than 2 years, and the Bolt is not only in production, but it looks virtually identical to the concept vehicle, and has exceeded its efficiency promises with an incredible 238-mile driving range. 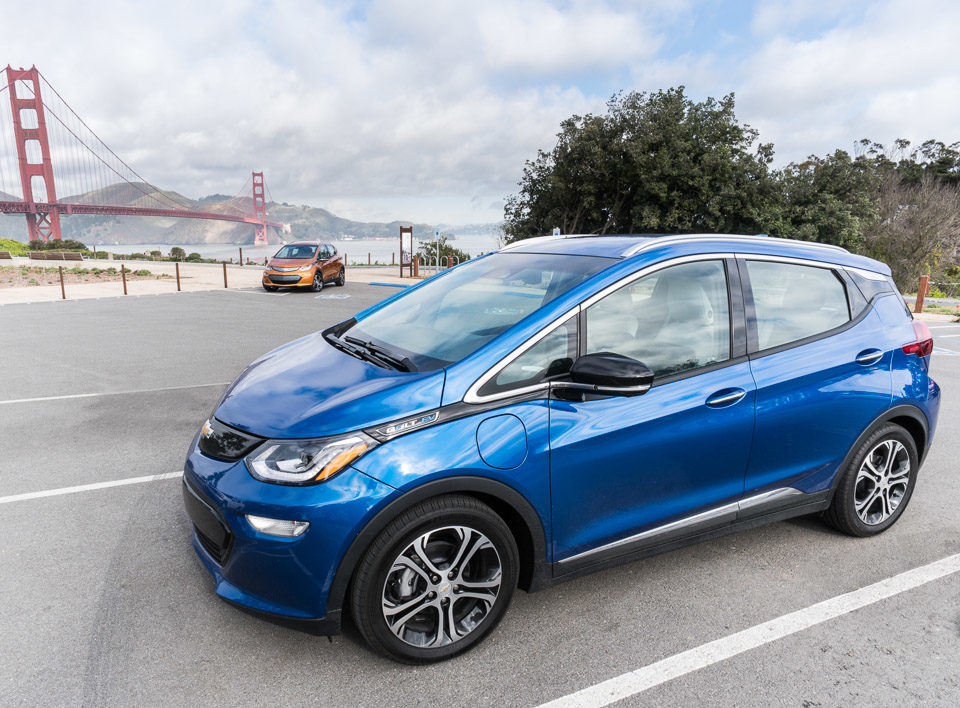 I recently met with members of the Chevy Bolt EV team in Silicon Valley to learn about the Bolt’s many capabilities, its technological prowess, and to take the vehicle for an extensive test drive along the Northern California coastline. 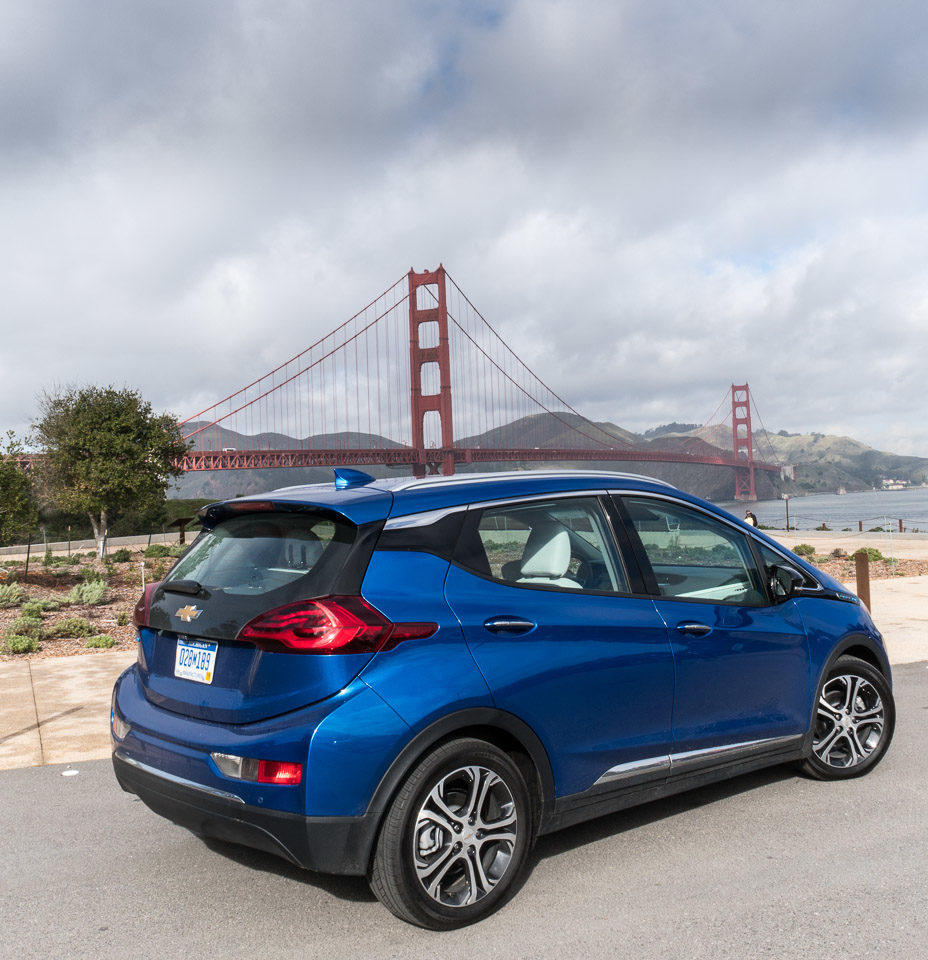 At the heart of the Bolt EV is a sophisticated 60 kilowatt/hour lithium ion battery pack which sits flat underneath the passenger cabin. That’s connected to a 150 kilowatt electric motor that drives the car’s front wheels. A triple cooling system beneath the hood ensures the battery’s temperature is regulated, along with the car’s other systems. 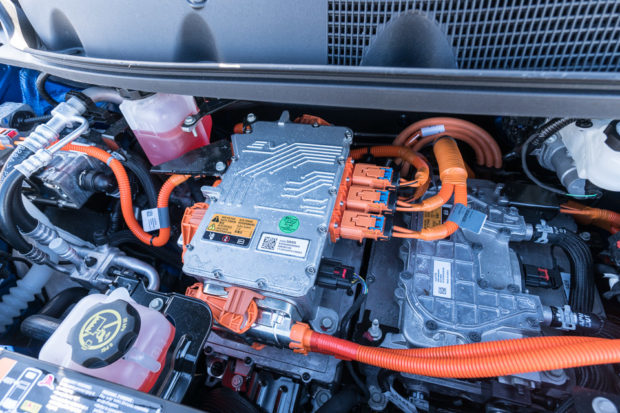 Its large, flat battery pack weighs about 1,000 pounds and its placement helps keep the Bolt planted to the ground, enhancing its driving dynamics and overall handling. 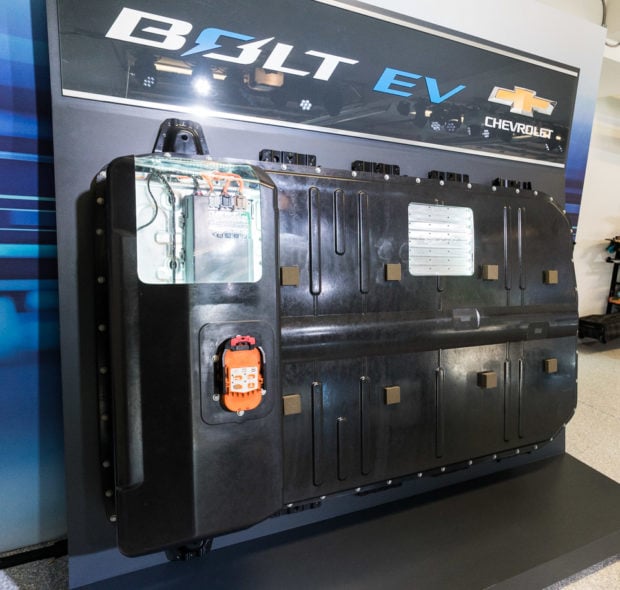 The Bolt’s motor cranks out an impressive 200 horsepower and 266 lb-ft. of torque, which can launch the car from 0-to-60 in 6.5 seconds. But the tremendous burst of low-end torque when you put your foot on the pedal makes launches feel much faster. Since electric motors have none of the inherent lag of gas or diesel engines, they get off the line crazy quick. Regenerative braking tech allows the Bolt to recapture energy from deceleration and convert it back into battery power, meaning you’ll often end up with more power than you started with when driving in heavy stop/start city traffic or especially when coasting downhill. 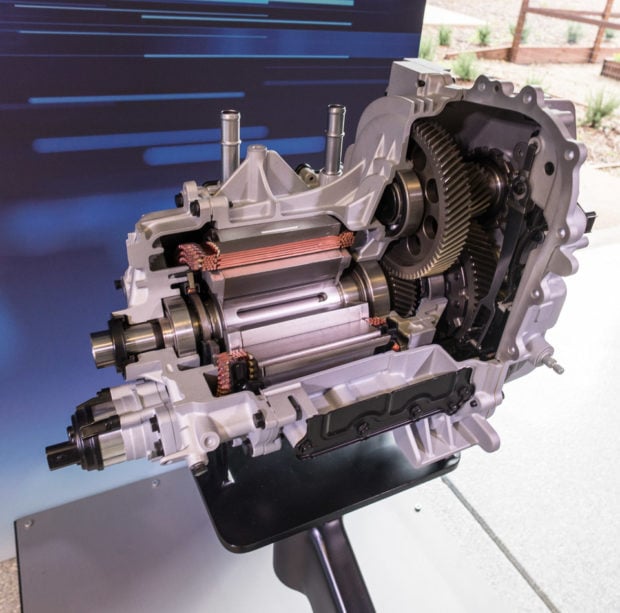 The Bolt’s body itself is a marvel of modern engineering, using lightweight metals to reduce weight and improve efficiency, and seven different types of steel to provide rigidity and safety for its occupants. Modern, lightweight materials are used extensively throughout the cabin, further improving driving range. 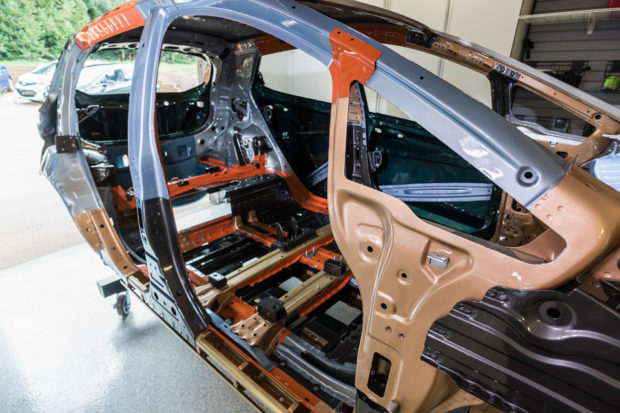 Fully charging the Bolt’s battery can be done via a 240-volt Level 2 charger in about 9 hours, or you can top off about 90 miles of range in just 30 minutes at a DC fast charging station, assuming you opt for the $750 upgrade. The Bolt’s touchscreen even lets you schedule charging times to avoid peak hour charges from your electric company, and a companion mobile app lets you monitor charging status remotely. 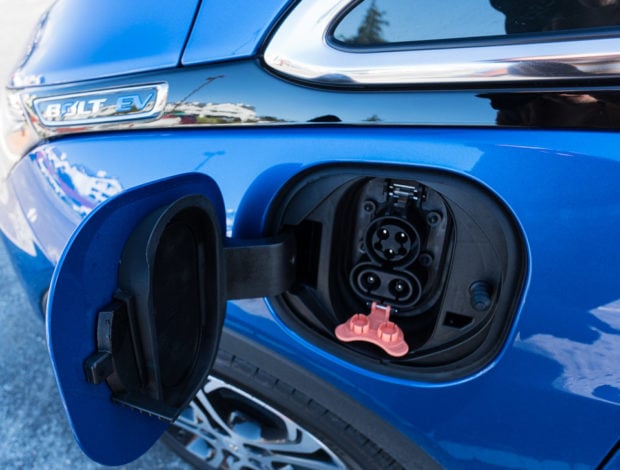 One of the things I love most about the Bolt is its incredibly cohesive design from exterior to interior. Even the user interface on the big 10.2″ touchscreen and digital instrument panel were designed within the same small team at Chevy’s design facility in Korea. 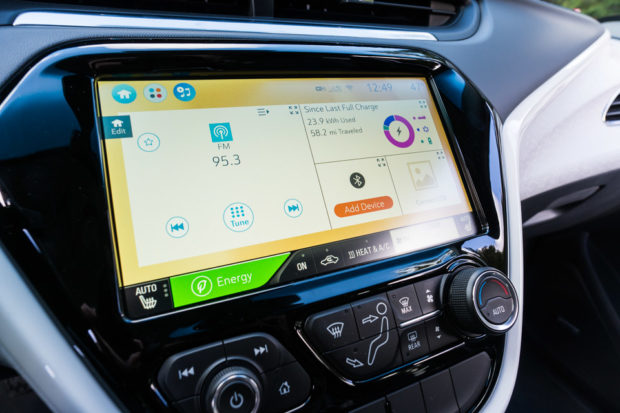 Data geeks and hypermilers will love the Bolt’s robust, but easy to use reporting screens, which display not only live estimates of range and power usage, but can show historical trends, detailed information about which systems are consuming the most energy, and analysis of your driving style and efficiency. 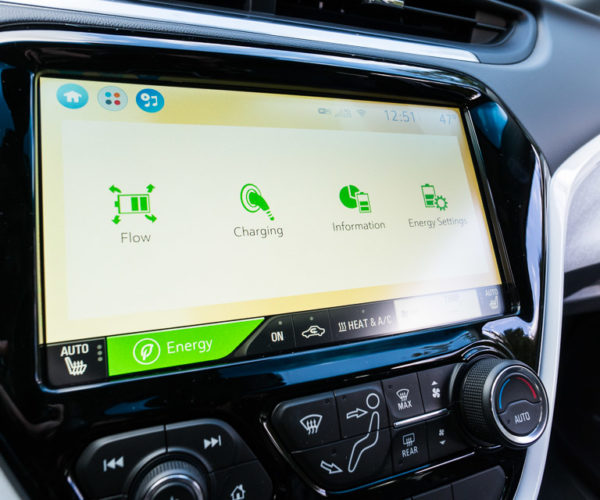 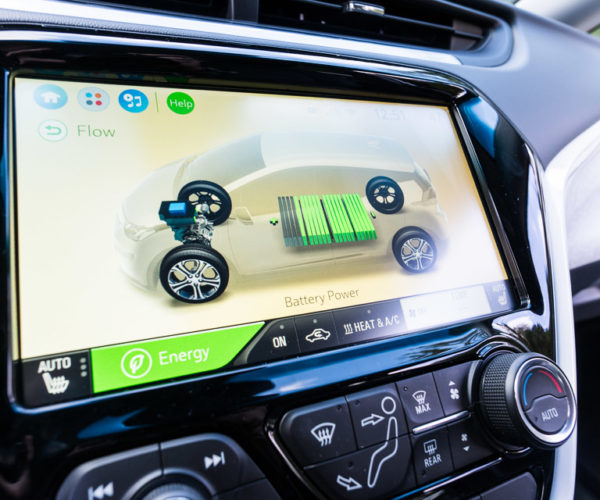 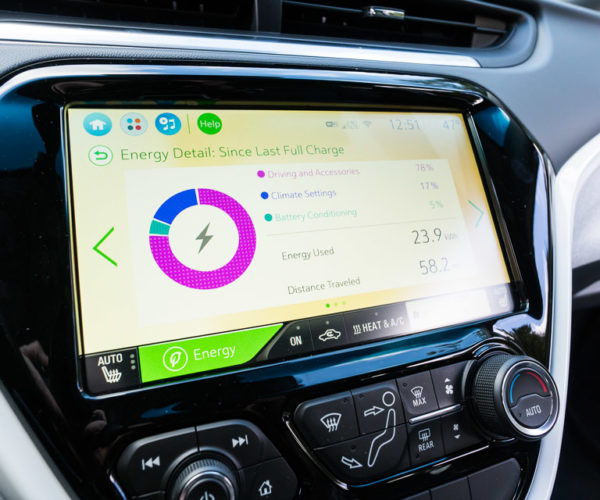 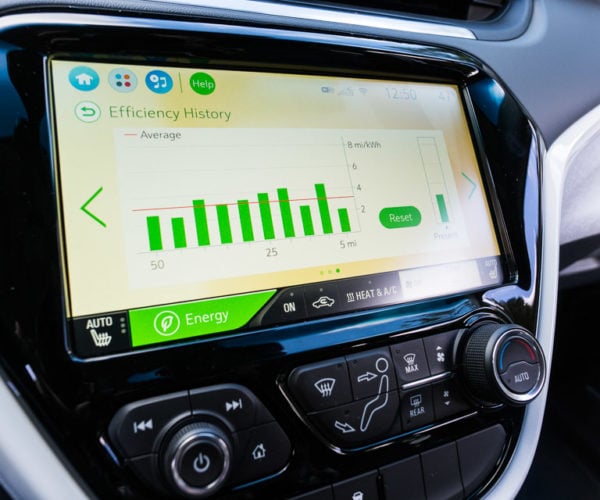 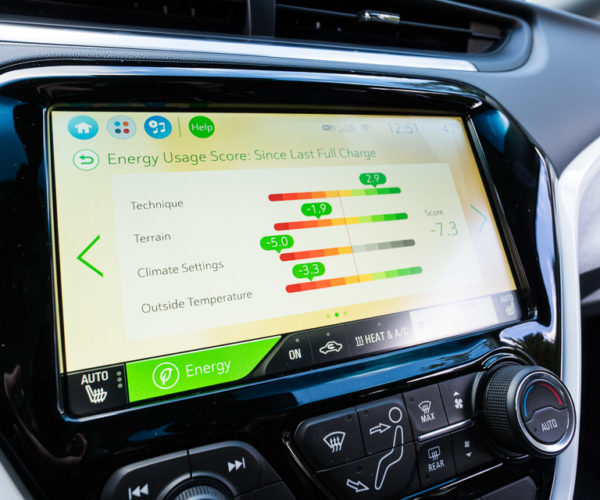 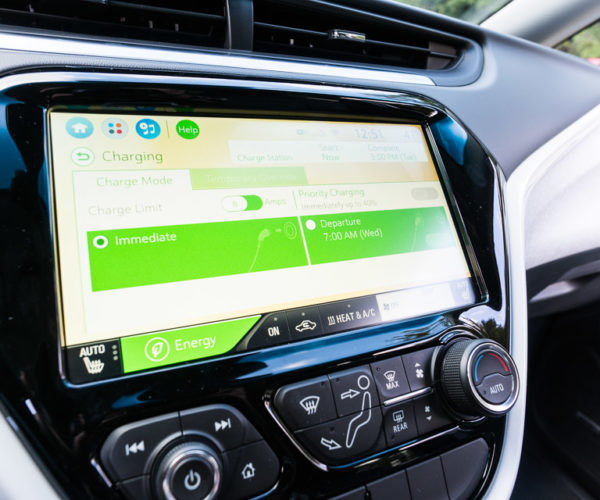 Chevy packs the Bolt EV with tons of high tech features for convenience and safety. For starters, there’s Apple CarPlay and Android Auto integration, a 4G LTE Wi-Fi hotspot, and optional wireless smartphones charging. And since pretty much everyone has a mobile device in their pocket these days, Chevy smartly included a pair of USB charging ports up front and the option for a second pair in the back row.

In addition to a backup camera, there are three additional cameras which can be used to display a top-down image of the Bolt to ease parking in tight spaces. There’s also a clever rearview mirror, which incorporates a widescreen LCD monitor. Flip into LCD mode, and your field of view increases from 20 degrees to 80 degrees out back. There’s a ton of modern safety tech available as well, including blind spot monitors, rear cross-traffic alert, lane-keep assist, and intelligent headlights which turn on and off as needed. The car’s front camera is even used to detect oncoming traffic and switches from high- to low-beams. An emergency braking system can prevent accidents at speeds below 50mph, detecting impending collisions with both vehicles and pedestrians and applying braking if needed. 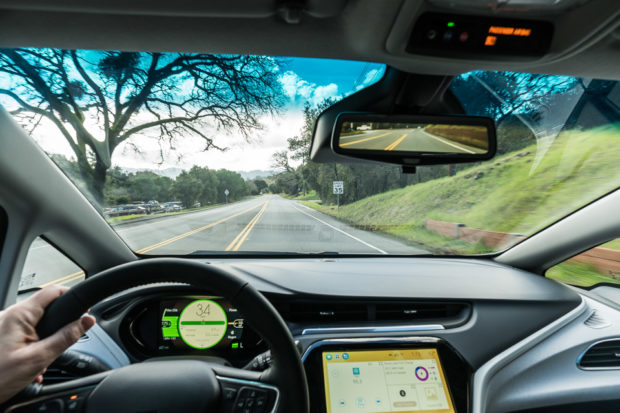 Chevy engineers explained that the available heated front seats and heated steering wheel aren’t just a luxury. They do a great job keeping passengers warm while using significantly less power than the car’s HVAC system. In fact, running the two front heated seats and heated steering wheel will use about 1/25th the power of the car’s main heating system. It’s a plethora of intelligent design choices like these that help the Bolt achieve such excellent driving range. Everything from the body’s slightly sloped roof, to the integrated rear spoiler, and even the tires the Bolt rides on contribute to its impressive energy efficiency. 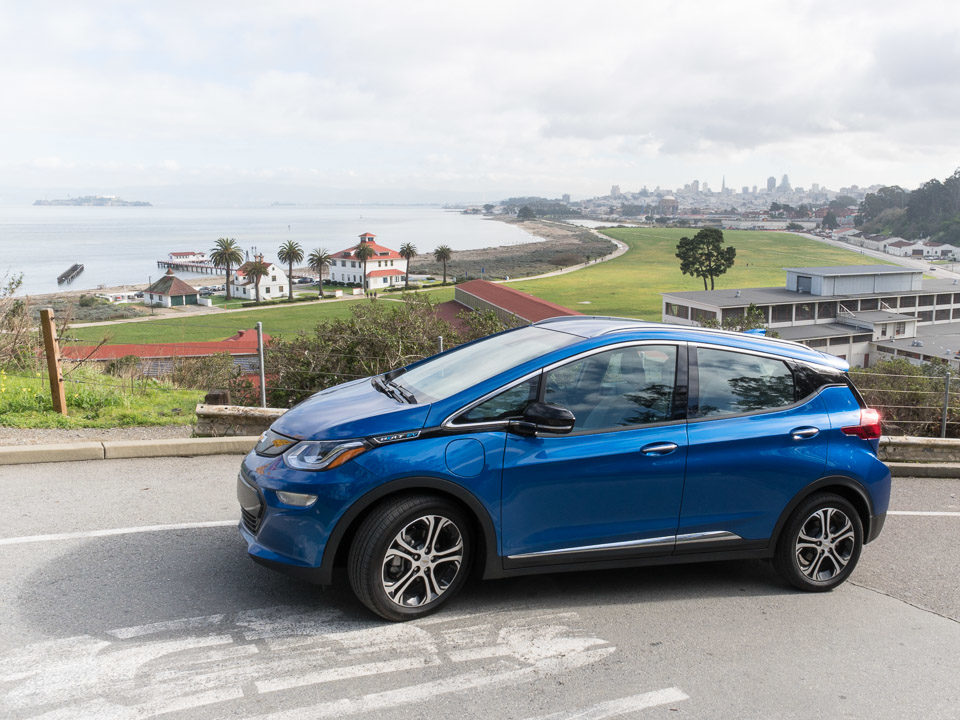 Of course, none of this would matter if the Bolt weren’t a great vehicle to drive, and it is. It feels great on the road, with sporty and direct handling, and plentiful passing power. Its interior is much more spacious than you might think from outside, offering space for five adults with better legroom and headroom than much larger cars and crossovers I’ve driven. And its overall design is modern, playful, and appealing without trying too hard to look like a “green car.” If you’re looking for a daily driver that packs the latest technology, cuts fuel costs, and eliminates dangerous emissions, the Bolt EV is unequalled.