What Happens When You Pump 20,000 Volts into a Watermelon?

The Backyard Scientist is back in his yard doing science, along with his electrically-inclined pals Brandon and Coyt, and this time they’re exploding watermelons with 20,000 volts of electricity. Yes, it is as awesome as it sounds. 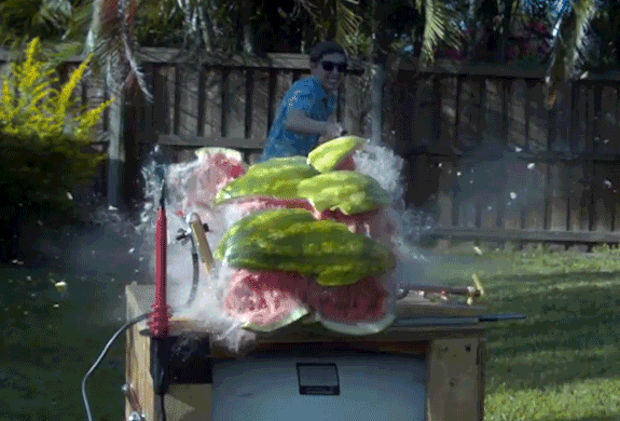 A battery stores power as chemical energy that’s slowly and steadily discharged, but a capacitor can unload all of its juice in an instant and that is what makes this explosion so spectacular. The capacitor used here is the size of a dishwasher, so yeah, crazy explosion. It’s basically homemade lightning. As demonstrated here it can destroy things thoroughly.

They tried to cook a steak with it, but sadly the cooked part is blown to smithereens, so it isn’t a great cooking device. Also, the noise it makes was enough to almost make Kevin’s neighbors call the cops. Needless to say, big capacitors are something you should never play with at home.