If you carry a gun for self defense of yourself, your family, and others, should you ever have to draw and use your weapon, you certainly don’t want that first shot at a knife-wielding maniac bent on stabbing your significant other to be the first you have ever fired out of your handgun.

If you like to shoot handguns, but find it hard to get out to the range frequently because of the high costs associated with shooting, it can be hard to get your practice in. I had a football coach in high school fond of saying “perfect practice makes perfect” because incorrect practice only builds bad habits.

I’m very far from an expert on firearms, and that makes me the perfect person for the iTarget training system. Dry-fire training with iTarget does not replace firing with real ammo mind you, but it is a fantastic supplement. Dry-fire means that you practice actually pulling the trigger of your own firearm, but instead of firing a bullet downrange, you are shooting a little laser dot at a plastic target held securely in a frame in this case.

Before we even get into this, be very sure to read the instructions if you decide to try the iTarget system, the last thing you want to do with any handgun training system is be careless with your training and fail to ensure your weapon is unloaded and secure. 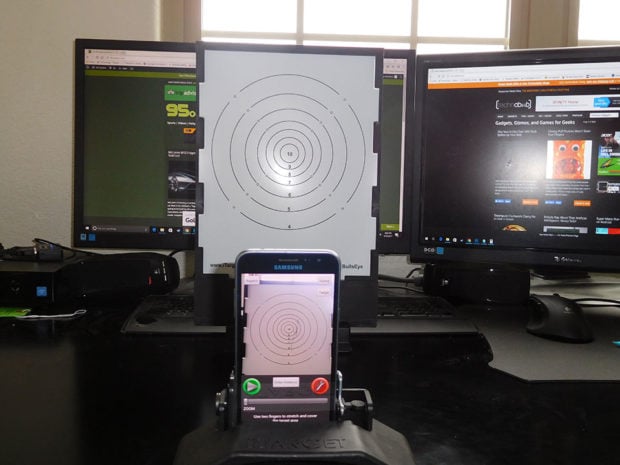 The iTarget system uses your Android or iOS smartphone as its brains. What you do is launch an app on your smartphone, adjust your phone in the holder, use familiar pinch gestures to zoom a red circle in on the target your smartphone camera sees on the sled behind it. Once you perform this calibration step, you’re ready to fire. Pressing the play button on the app once you set your target area means that the system is ready to see the red laser dot that fires out of your pistol. To load the laser bullet, you simply remove the magazine from your pistol, empty it out, ensure that no cartridges are in the barrel of your gun, and insert the laser bullet into the barrel. 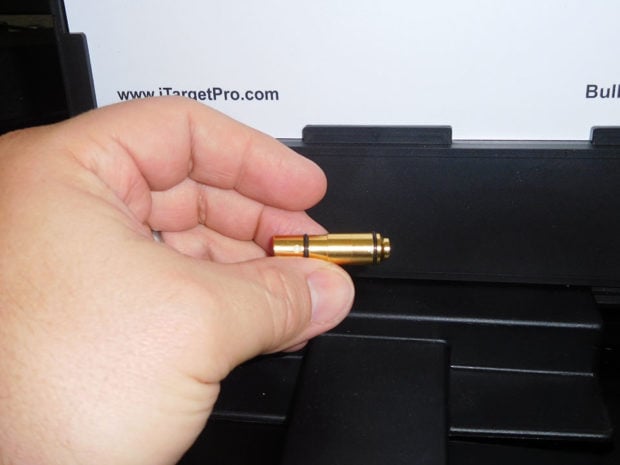 Then all you need to do is pull the trigger and the firing pin of your gun activates the laser by hitting a black rubber backer sending the red dot onto the white target surface. The smartphone’s camera sees where the dot hits on the target surface, makes a shot sound, and records the hit on an image of the target in the app. It totals up your points and lets you know how well you are doing. 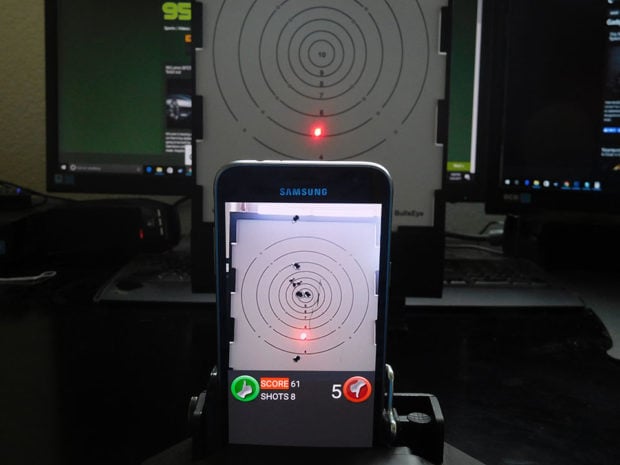 The idea is to train yourself to have proper trigger control so your shots go where you intend. On my pistol this is critical. I have a Sig Sauer P290RS 9mm sub-compact that I carry for self defense and it is a hammer-fired double action only (DAO) pistol. That means that you can’t cock the hammer of the gun for a shorter trigger pull, it only fires with a full (and very long) pull of the trigger. The issue for me and many others who shoot DAO pistols and revolvers is that it is very easy to throw your shots way off target due to the way the gun moves in the hand with each trigger pull.

I had a very hard time shooting the sort of groups I want at the range due to this. Dry-firing my DAO pistol gave me the same exact issues on the iTarget system that I had at the range, namely shots tended to pull low and to the left. Within a few weeks of practicing with the iTarget system I was able to learn how to press the trigger of my pistol without disturbing the sight picture meaning much more accurate virtual shots, and subsequently at the range.

Using the iTarget system is also very fun and allows you to practice drawing from a holster with all the realism of doing it in real life – only without the boom and kick you get when firing live rounds. It also saved me big money because 9mm ammo and range fees aren’t cheap. It’s worth noting that with a DAO pistol like mine you can simply pull the trigger to practice rapid fire shooting all you want without having to rack the slide. If you use a striker-fired pistol like a Glock, you will have to rack the slide slightly each time you press the trigger of the pistol. When you are done practicing, you can use a cleaning rod or pencil gently pushed down the barrel of the gun to push the laser bullet out of the barrel.

iTarget laser bullets are available in multiple calibers including 9mm, .45ACP, 40 S&W, 38 Special, .380 ACP, and .223. One target and smartphone holder is all you need for any caliber you want to practice with. The iTarget system costs $89(USD) for the complete package including a single laser bullet. If you want to practice with different caliber weapons, each additional laser bullet costs $69. iTarget is like a day at the range without spending any money or cleaning of your gun afterwards.