The thing about NERF darts is, they’re designed to be safe. You can unload them on friends without having to worry about any serious injury, but what happens when you fire a NERF dart from an air cannon? Let’s just say you will want to get the hell out of the way! 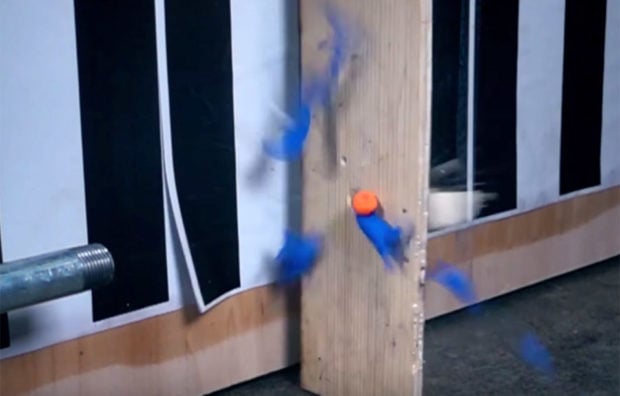 On the latest episode of his NERF Experiments series, Giaco Whatever loaded up an air cannon he built with NERF darts, and let them rip. They’re so fast, you can’t see them with your naked eye, so he captured slow motion footage to find out just how fast the NERF darts were traveling from the cannon.

It turns out that the dart flies along at about Mach 2.3, which is 2.3 times the speed of sound. And that means that the dart is wayyy more dangerous than when it’s fired from an ordinary NERF gun.

Yes, it took a nice chunk out of that block of wood. Clearly you don’t want to be in the path of this thing. If you don’t believe me, check this out: