Growing up, I spent some time with at my grandfather’s house during the summer. There were no toys, only the stuff he liked to do. That meant cards, dominos, and copious amounts of beer. That meant while he was sitting under the tree out back getting snockered, I was setting up lines of dominoes to topple. My uncle was a bit of an a-hole, and would often come by and shake the table just as I was finishing up my last bit of domino line. 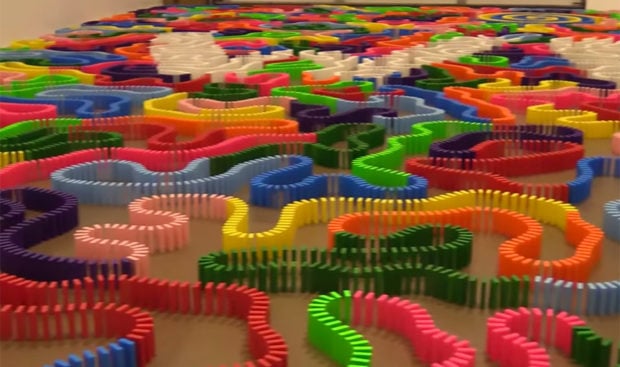 Domino fanatic Lily Hevesh recently teamed up with some pals to set an unofficial world record for toppling the longest domino line ever. There have been displays with many more dominoes, but none recorded where they were all in one continuous line. The line had 15,524 dominoes and took the guys two days to set up, and about five minutes to knock over:

I can only imagine if my uncle were around the task would have been more tedious. Fortunately, for Lily and company, they didn’t have to deal with that.