I’ve used a few different 3D printers over the years, and some of the biggest challenges I’ve had have been the level of detail of prints, the ability to print complex structures without lots of crazy supports, and the limited size of the build area. The latest printer DFRobot and DreamMaker aims to solve all three of those, and for the most part, it lives up to all of those promises.

I’ve been testing out the new Overlord ProPlus for the last few weeks, and it does a great job printing large, complex models, and with fewer issues than I’ve had with some other printers. By using an open, vertical enclosure with a delta-style mechanism, it can print models up to 260mm (~10.2″) tall x 170mm (~6.7″) in diameter on its round print bed. It’s got a variety of premium features, including a heated bed, automatic calibration, and cooling fans which help hot materials set quickly after being extruded, and can work with both PLA and ABS filaments. 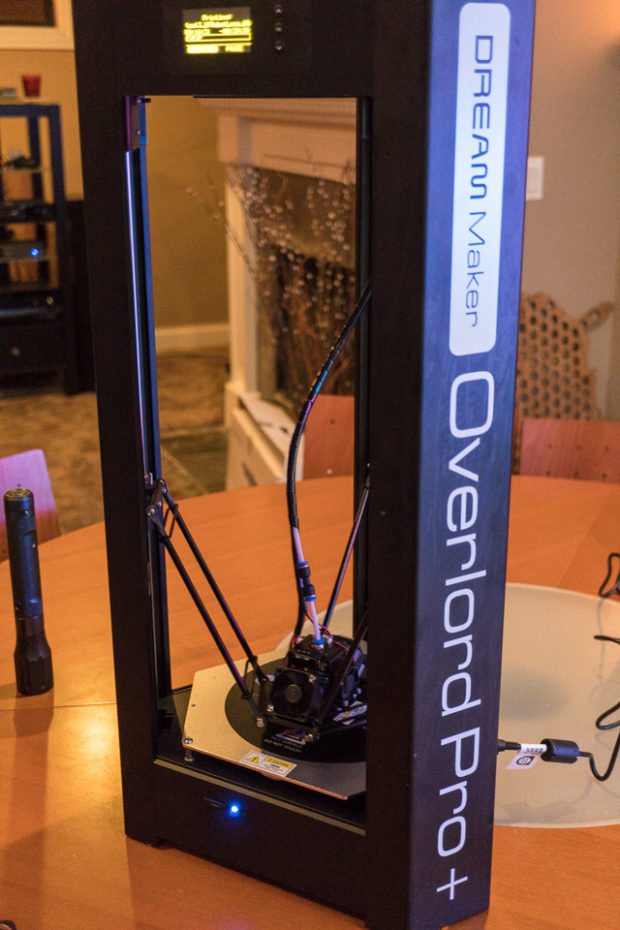 Setup is quick and easy – just unpack it from the box, hook up the power brick, and carefully cut the anti-travel tie-wraps which are around the drive belts. I emphasize “carefully,” as I could see it being very easy to accidentally cut the drive belts while cutting the tie wraps. 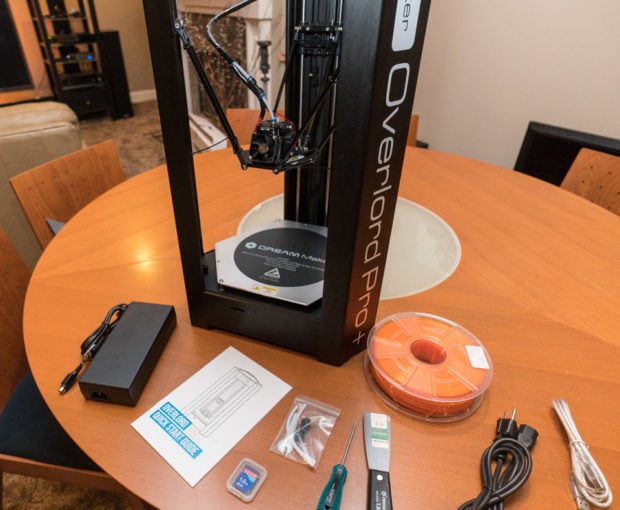 Once it’s turned on, a simple set of on-screen instructions guide you through loading filament, which you insert through a loading tube at the top of the machine. I had a little problem getting filament to load the first time around, as there appeared to be some old filament jammed in the path from a previous reviewer. It took me a few minutes to diagnose and clean this out, but then it loaded easily, pulling the filament down from the top of the machine and snaking its way down to the extruder. 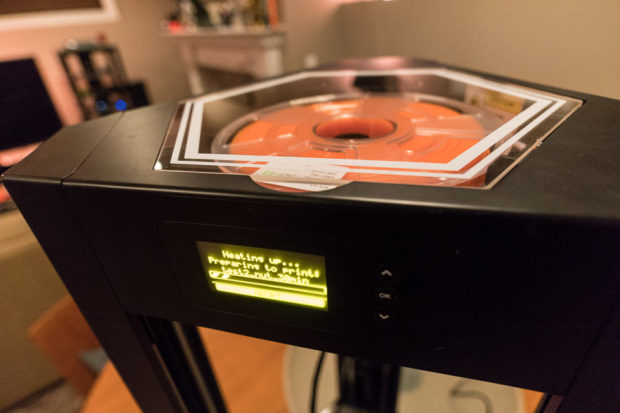 I ran through the calibration process one time just to make sure everything was right after transit, and it was as simple and automated as it gets. A push of a button, and the print head lowers itself and touches its to the bed in a few spots, and that’s it. That’s much easier than the manual calibration I’ve had to deal with on some other printers.

Printing is as easy as loading up an appropriate .gcode file via the built-in SD card reader, or streaming it over via USB. I came with a few sample models on the included SD card, but I wanted to slice some of my own STLs. I grabbed a few from Thingiverse, and installed the included Cura software which is a basic slicing utility. Since this is a brand new printer model, it took me a little research to find the right presets for the Overlord ProPlus, but once I did, the application worked just fine to quickly convert some STL models to Gcode. I personally prefer Simplify3D, as I find it to be a bit more user-friendly and robust than Cura, but Cura came free with the printer, and Simplify3D costs $149. If you plan on doing lots of printing, I suggest splurging for the fancier software. 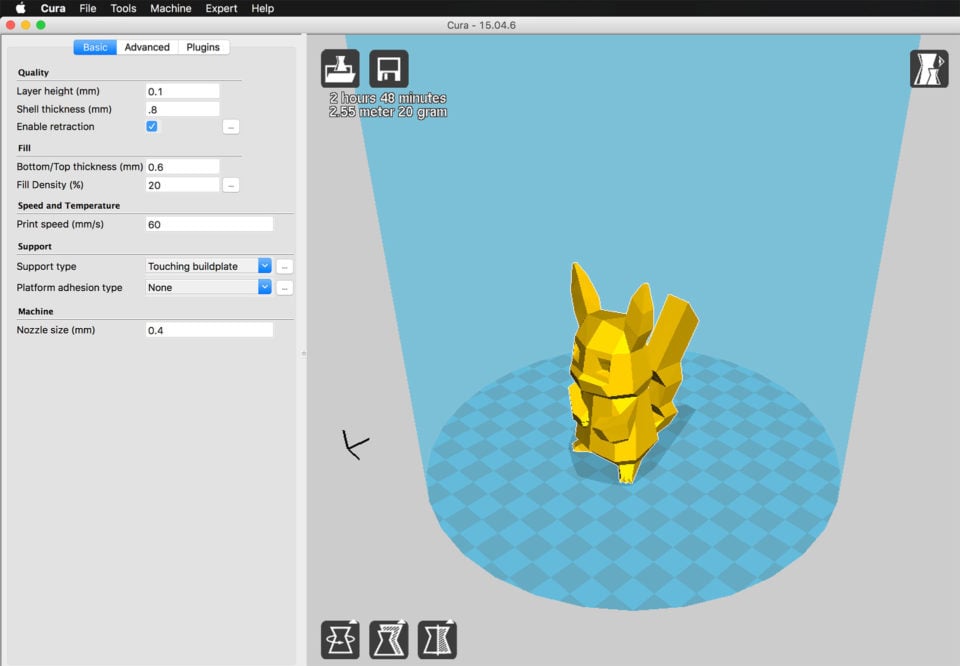 I tested a few different prints along the way, all using the provided orange PLA sample filament. It immediately was clear that the Overlord ProPlus can print extremely detailed structures, and with a super slim layer height that’s about as smooth as I’ve ever seen from an FDM printer. It’s not as sharp as a resin based printer, but there’s none of the mess, odor, or materials limitations you get with one of those. 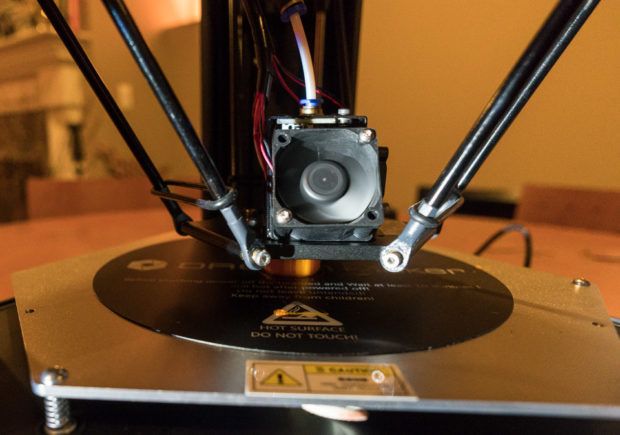 I started out with some of the sample print items, like a large nut, and a circular ring, then output a pocket-sized TARDIS model, which you can see being printed below:

As you can hear, the printer is also exceptionally quiet while it’s at work. Despite having open sides, you could definitely have this printer running in an office without being a bother. 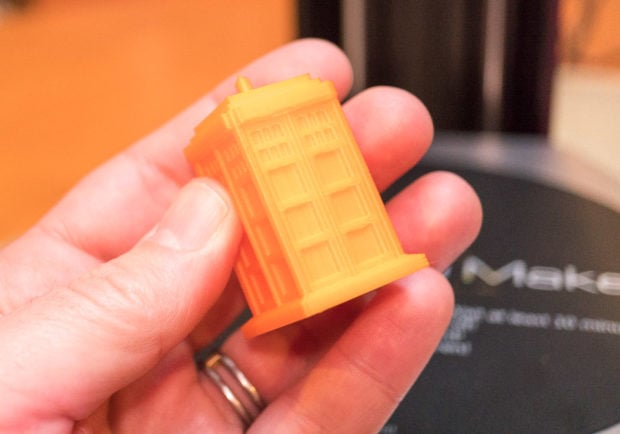 After the TARDIS was complete, I ramped up to a larger model – a 5″ tall Pikachu. Yes, I know he should have been yellow, but he still turned out pretty great, and with no extra support structure needed – even for that wambly looking zig-zag tail. 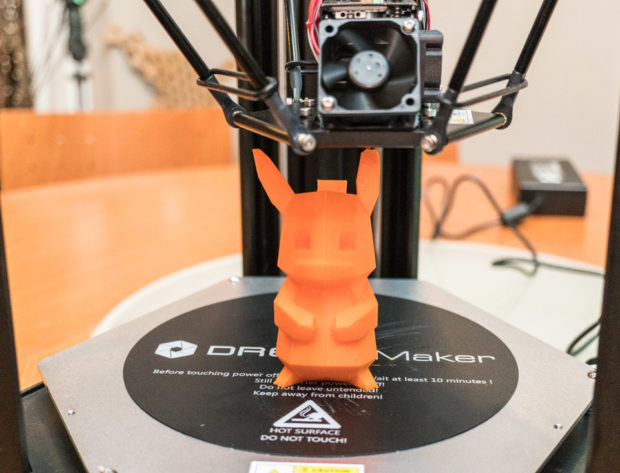 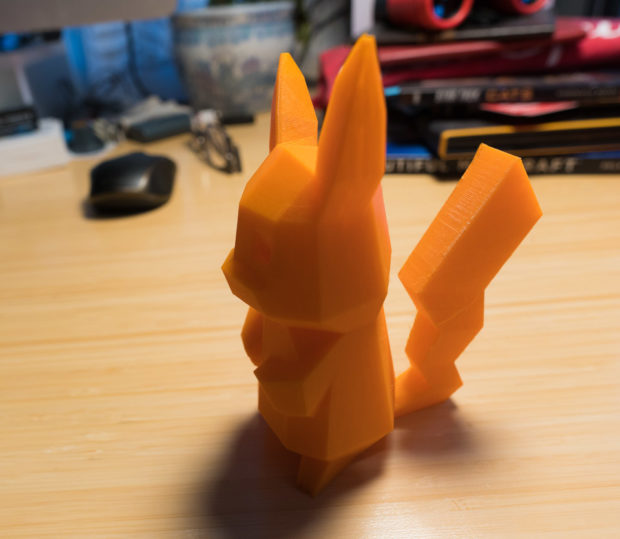 As my confidence built, I loaded up an intricate model of the Eiffel Tower, and set it to print at nearly the maximum height allowed. The result – about 11 hours later – a beautifully detailed 10″ tall sculpture for my desk. I’ve tried printing this same model on other 3D printers, and have often run into failures, but the ProPlus did it right on the very first try. I think part of why things work so well on this printer is the open ventilation on the sides and the airflow around the part to keep structures from collapsing on themselves. Clearly, the engineers did their homework on this printer’s ventilation setup. 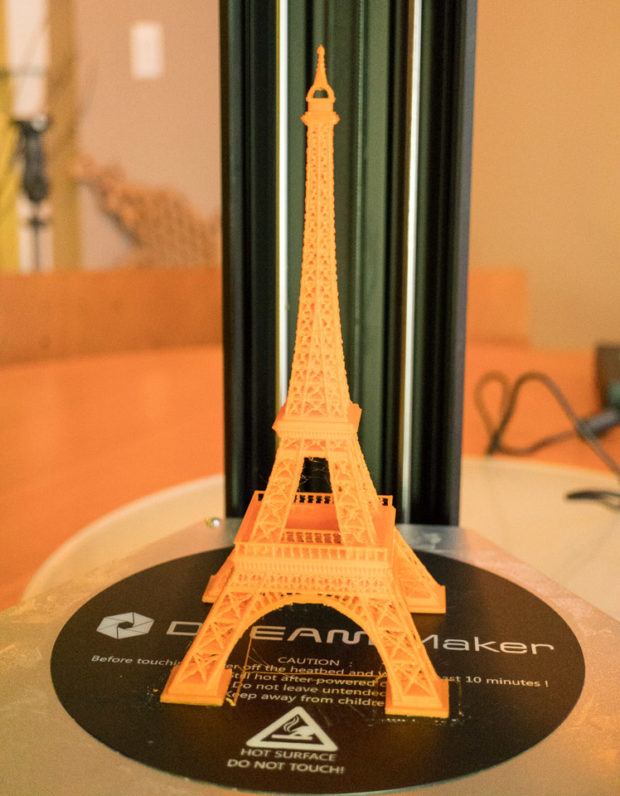 The Eiffel Tower is notoriously difficult to print, and you can see some jaggies along the most detailed areas of the structure. Still the fact that all of the girder openings remained open, and didn’t collapse at all is impressive. Along the way, I also got to unexpectedly test out one of the printer’s other features. About 4 hours into my print, the power went out in my house. 2 hours later, the power came back on, and the printer asked me if I wanted to resume my print, and picked right back up where it left off. Impressive. While I knew the printer had a pause/resume feature for changing filaments mid-print, I didn’t know it would be smart enough to handle a power outage too. 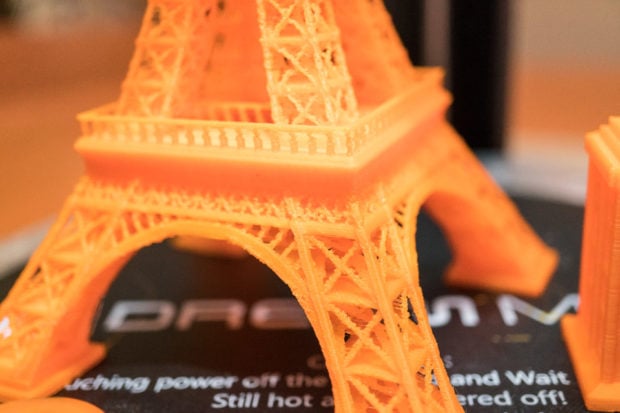 As is the case with most 3D printers, it can be hard to get models off the bed after you finish a print. You want the plastic to stick enough that you get a good base, but you also want to be able to remove it. The printer includes a round, replaceable “build tape” bed which definitely helps provide a good base for models. However, it’s still quite tricky to pull delicate models off the base, even with a scraper. This isn’t unique to this printer, and my suggestion is to lay down some blue painter’s tape over the base before printing, which makes it much easier to remove finished prints. Just make sure it’s stuck down well, as the heated bed can make tape peel off, and always recalibrate if you add anything that affects your bed’s height. 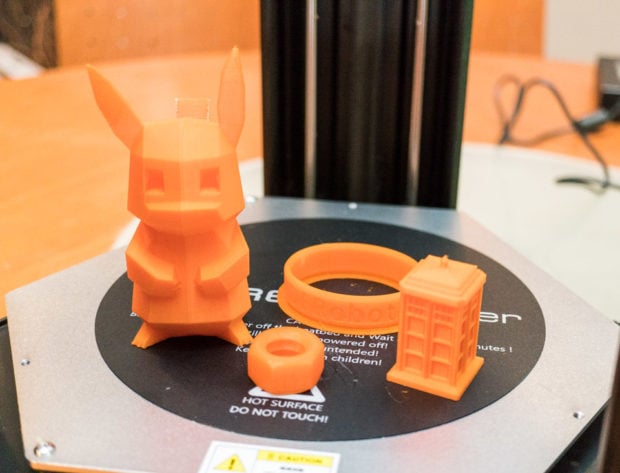 Overall, I’m very impressed with the OverLord Pro Plus. It prints the best quality 3D prints I’ve encountered on reasonably priced machine, and does it quietly and smartly. Best of all you can get it for a limited time for a great price. DreamMaker is currently raising funds over on Indiegogo to ramp up production, and the first 49 super early birds can get one for just $499 – which is an amazing deal. The rest of Indiegogo buyers will still pay just $599, which is also a very good deal for a printer that will eventually retail for $1049.