Unless you have a late model car with a factory heads-up display, the Navdy is definitely a device worth considering. It adds a heads-up display to any car, and is capable of displaying navigation and other useful information without you having to take your eyes off the road.

I’ve been testing the Navdy for a while now, and the fine folks at Navdy have been very patient with me. Originally, I had planned to use the nav system in my company car since I drive a lot to places I don’t know how to get to for my day job. The catch was that my company uses a fleet management solution that plugs into the OBD-II port in my work car.

That very same port is the only place that Navdy’s HUD can draw power and other information it needs from the car. That meant using it in my work car was out. I moved it over to my wife’s car, and my weekend ride, a 2013 Nissan Juke, and all worked without issue. 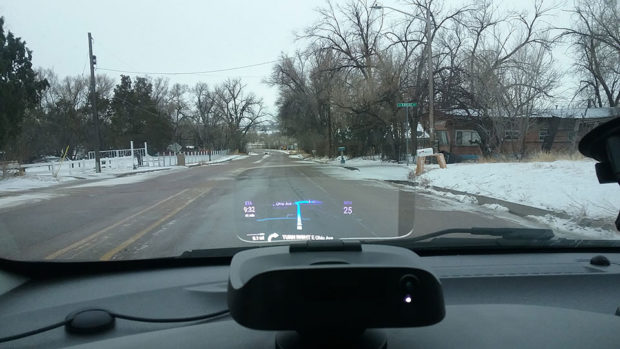 Getting the Navdy setup in the Juke was a bit challenging for me. The car has a unique dash and the short mount was too short, the medium mount was slightly too short for me, and the tall mount was entirely too tall for me. It could well just be that my favored driving position, which is very upright and close to the wheel, doesn’t lend itself well to the mounts in that car. I didn’t have that issue when I had it in my work car, a 2014 Chevy Sonic. The low mount was perfect in that car.

I went with the medium mount in the Juke, and didn’t have any issues with vibration when driving, even on the potholed Colorado streets and highways. I love the way the maps are more in your line of sight with the Navdy rather than to my left or right like they are with my normal GPS device. I also like the brightness of the Navdy screen. It was easy to see no matter the sunlight outside. This is a big deal with all the bright, direct sunlight that Colorado has year round. 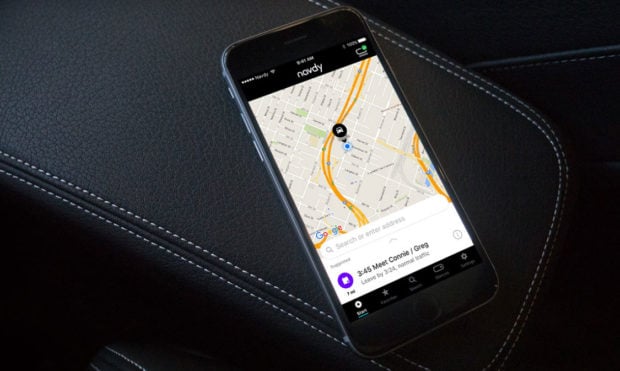 The Navdy system relies on your mobile phone for connectivity, but it stores internal maps provided by Google. This is a very big deal if you plan to navigate in areas where cellular coverage is spotty. For instance, I live right outside of Colorado Springs, Colorado and if you drive 5 miles into the foothills, any hope of cellular coverage is gone. With its internal maps, I can keep going without any issues. I also like that since the Navdy connects to my OBD port, it knows when I need fuel, and will route me to nearby gas stations, without stopping routing for other trips you have underway. I also love the fact that the app that provides the maps is updated for free for life, unlike car and GPS manufacturers who like to charge for map updates.

In addition to directions, the Navdy app can also display text messages and notifications, as well as work as a heads-up speedometer. It’s controlled using simple hand gestures, which are easy to use and work well the first time, so you aren’t in your car waving like an idiot at drivers around you. I like that you can control your music directly from the Navdy device, as well as answer and end phone calls all with gestures. That means you don’t need to move your eyes of the road. Navigating menus on the Navdy is very easy thanks to a handy little rotary dial that attaches to the bottom of your steering wheel. The dial is dead simple, and doesn’t get in the way during normal driving.

I did have a couple of issues in use with the Navdy. The biggest was audio, with the audio for turn-by-turn directions coming from the phone’s tiny speaker it was impossible in my noisy car to hear the directions if the radio was on. I’m assuming this wouldn’t be an issue if you’re listening to media via Bluetooth or an AUX jack on your car’s stereo, but that won’t work if you’re listening to the radio like I like to do.

I often drive with earbuds in my ears and listen to audio books. That was out of the question with my phones meager volume for turn by turn directions. I’ll admit to using a cheap, basic phone that has crappy audio. If you are using a better phone, this might not be an issue at all.

The biggest issue for me that kept me from using the Navdy as I wanted was the GPS dongle that my company required me to keep in my OBD-II port. I won’t be the only person that runs into that issue. We had a dongle in that port from our car insurance company in the Juke, so I had to temporarily pull that out. I would love to see Navdy integrate an OBD-II dongle on the Navdy that has passthrough for connecting a second dongle. I used to have a ECU programmer that had a passthrough connector and that would be perfect with the Navdy.

All in all, I really loved the Navdy device and found it much better than my Garmin I use on a normal basis. The Navdy is cool, easy to install, and will get you where you are going. Just be sure your OBD-II port is free and can listen to your phone’s audio via your car stereo, and you will love it too. The Navdy retails for $499(USD), and is available now.