So you bought yourself a fancy flatscreen TV so you can enjoy movies, sports and games on the big screen. But you plug it in and are quickly disappointed that the tiny little speakers they crammed in there do nothing to complement the awesome picture. What you want is a home theater sound system. While you could buy a big multispeaker setup, that means wires everywhere, multiple boxes, and generally something that’s not particularly living room-friendly. You need a soundbar.

One of the newer entries into the soundbar market here in the US is Q Acoustics. This popular UK hi-fi brand has recently started to sell their gear here in the states. They sent me over one of their M3 Soundbars for testing, and overall, I think it’s a very solid entry into the space, with an exceptionally good price for its quality. 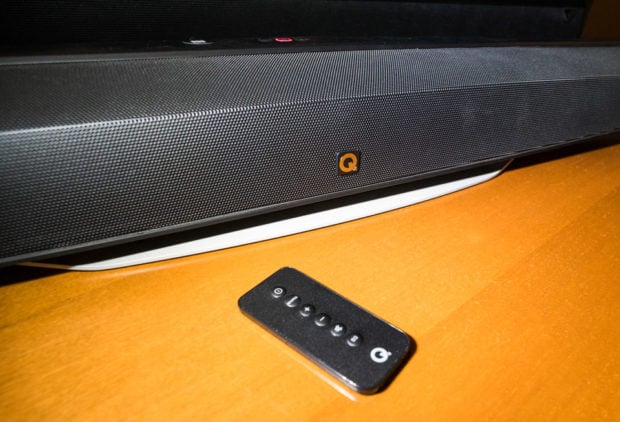 Priced at $349(USD), the M3 is designed to be the only piece of audio equipment you need in your living room. It sits underneath your TV, inside a cabinet, or on your wall, and features a clean, modern, and minimal design. One thing that’s really nice about it is that if you do chose to mount it on the wall, its base transforms into a wall mount, and they include a template in the box for drilling your wall anchors. A wall mount is often an extra cost with other soundbars.

The speaker measures 39.37″ wide x 5″ deep x 3.54″ high, making it the perfect height to sit in front of almost any display 45″ diagonal or larger. It will stick out just an inch or so on each side with a 40″ display. 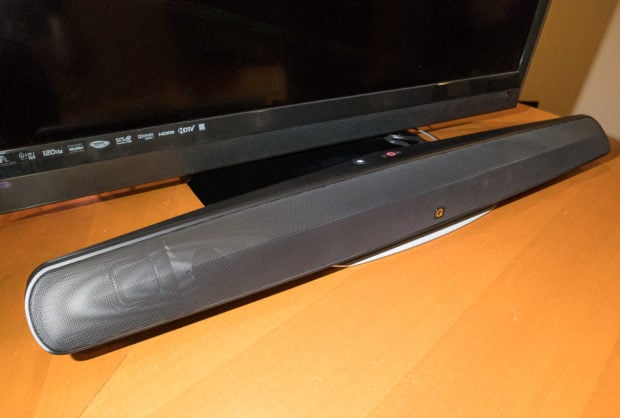 Setup is easy. First flip the EQ switch on back to say whether you’re mounting the speaker on the wall, on a cabinet, or in a cabinet. That optimizes the sound quality to match your setup. Then plug in the included HDMI cable to your TV’s HDMI ARC out port, and you’re all set. If you don’t have an ARC port, you can connect it to your TV’s optical output, but you’ll need to buy a cable for that. After that, you go into your TV’s audio menu and make sure to turn of the internal speakers. That’s it. You’re all set. 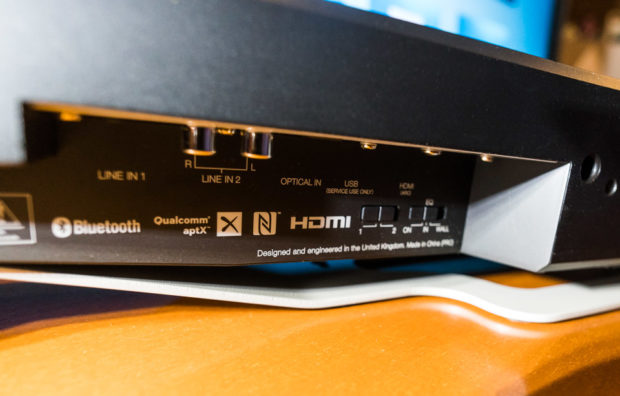 In addition to being able to connect to your TV, the M3 also has Bluetooth support built in, as well as NFC-pairing if your phone supports it. Connecting to other Bluetooth devices is as simple as switching to that input, and pairing while the blue light is blinking. There are also a pair of analog line in jacks if you need them.

Once connected to my TV, the audio quality was dramatically better with the M3 than with the built-in speakers. It’s capable of pushing out room-filling volume levels, and is especially adept in the mids and highs. Since it doesn’t have an external subwoofer, don’t expect room-shaking bass, but there’s enough low end for a satisfying movie watching experience. If there’s any complaint at all, it’s that the low end does distort just a little bit at higher volume levels. For instance, when a big star destroyer passed overhead during The Force Awakens, there was a little unwanted woofer reverberation in the deepest tones. Dialogue is especially crisp and clear on the M3, but rather than focused in the center, it’s smoothly distributed across the soundstage, which is very pleasing to the ear.

When watching movies, I highly recommend enabling the MovieEQ feature on the remote. I’m not sure of its exact processing algorithm, but it seems to dramatically increase dynamic range as well as the perceived size of the soundstage. I can see no reason to leave this off when watching movies or TV shows, but you’ll want to leave it off when listening to music for the purest imaging. Music in movies and played from a smartphone via Bluetooth sound great too, so this can definitely double as a stereo system. 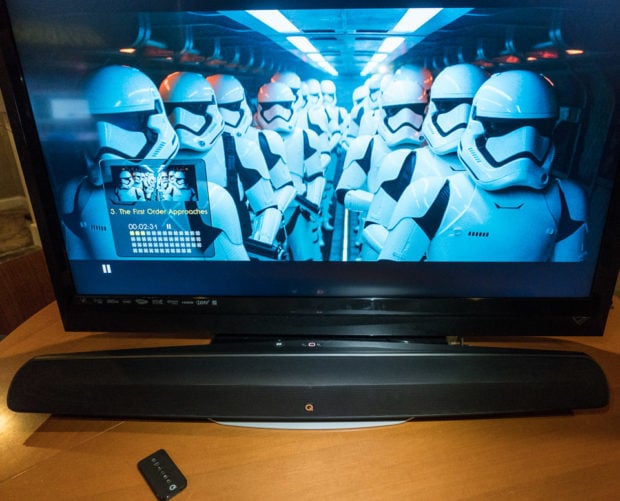 Overall, the Q Acoustics M3 would be a welcome addition to any living room in need of a bigger, louder sound but without clutter, and without breaking the bank. The M3 is available in the US and Canada from QAcoustics.com for $349.99 or in the UK for £299 from QAcoustics.co.uk.