Sometimes, I feel a little weird reviewing crowdfunded items that have yet to go into production. On one hand, it’s good exposure for the projects, but on the other, the products are usually prototypes and not ready for prime time.

One such device is the Freecast – a system designed to let photographers livestream video from their cameras. The Freecast’s promise is that it will let you live broadcast high quality video from any device that has an HDMI output. The Freecast will come in three flavors, two GoPro specific models, and a Universal model that works with any camera so long as it can be monitored via its HDMI output. Suffice it to say, pro photogs with DSLRs and mirrorless cameras were pretty excited when the project turned up on Kickstarter.

In my case, I tested the final hardware of the universal version, so I was able to check it out with both my GoPro Hero 4 Black, and my Sony a6300. This kit comes with two portable devices which can be carried on your belt or in a pocket. One is a transmitter, and the other is a receiver. They’re just a little bigger than a pack of cigarettes, and the hardware seems very polished and well built. 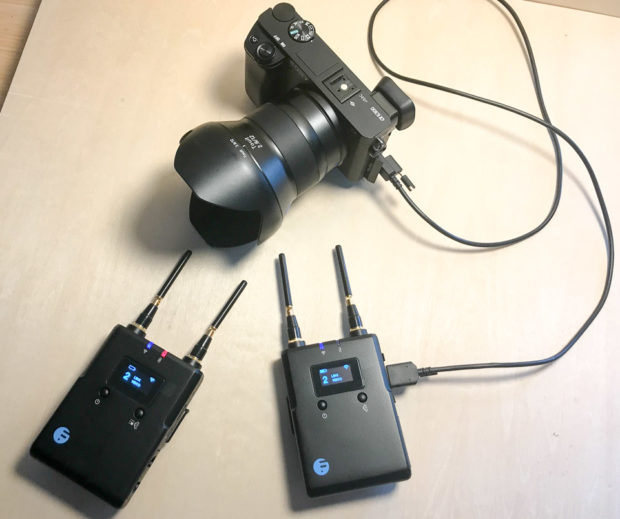 Out of the box, they’re already set to communicate with each other, so all you need to do to get data flowing from the transmitter to receiver is plug in your camera’s micro HDMI output to the mini HDMI input of the transmitter, then turn both devices on. In this state, you can use the setup to send live content to an HDMI monitor, thanks to the receiver’s mini HDMI output. Both a micro HDMI to mini HDMI cable and a mini HDMI to HDMI cable are included in the box. The transmitter also has a 3.5mm audio input you can use for an external audio device.

This is where signal quality is the best, since it’s not being rebroadcast over the internet. I found that when I fed in a 1080p HD signal, the image quality dropped to something along the lines of a 480p image – maintaining a good frame rate, and with minimal lag, but with a decent amount of pixelation. It’s fine for a live production monitor, but not exactly broadcast quality. Freecast claims their device offers a transmission range in optimal conditions is up to 300-500 meters, though I didn’t get to test from more than about 100 feet away from the receiver. 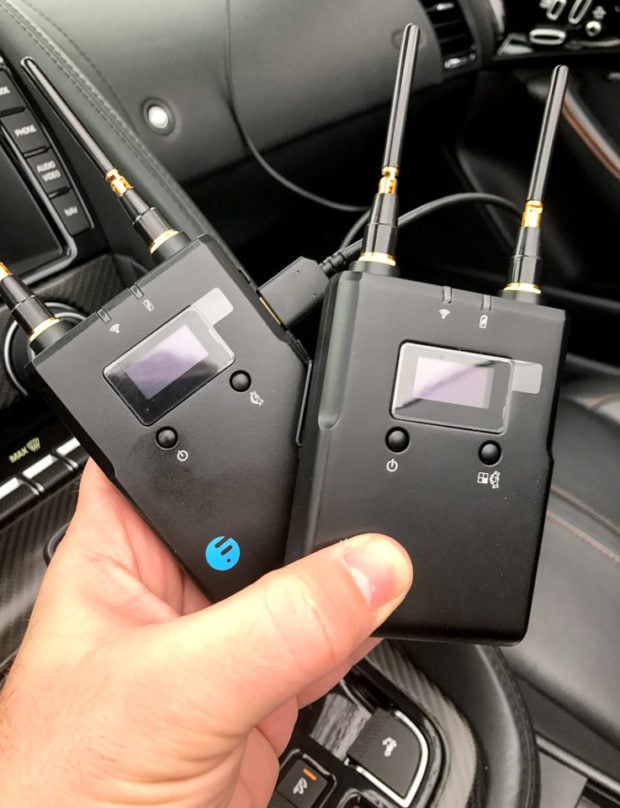 Now this is where the big “remember, this is a prototype” caveat comes in. The only way to get that video stream to the Internet at this point is using a beta version of the Freecast software. This iOS app is definitely rough around the edges at this point. It works by pairing your mobile device with the receiver over Wi-Fi, which means that you can’t broadcast over Wi-Fi at the same time. Instead, you’re relegated to whatever data service your phone provider can muster. In my case, that’s mostly 4G LTE, with occasional drops to 3G.

The beta app currently offers rudimentary support for streaming to Facebook, YouTube, as well Yi Live and Mudu, which I assume are popular elsewhere in the world. For my testing, I only attempted to use Facebook Live, since that’s the one I’m most familiar with. For now, the app requires that you go get a Facebook streaming video URL, which you can grab in the desktop video console for Facebook pages, but promises that this will be automated in a later release of the app. For testing purposes, it worked fine for me just cutting and pasting the URL and sending it to my smartphone. The app itself did struggle at times to display the proper resolution for the attached video device as well, and required frequent reconfiguration. 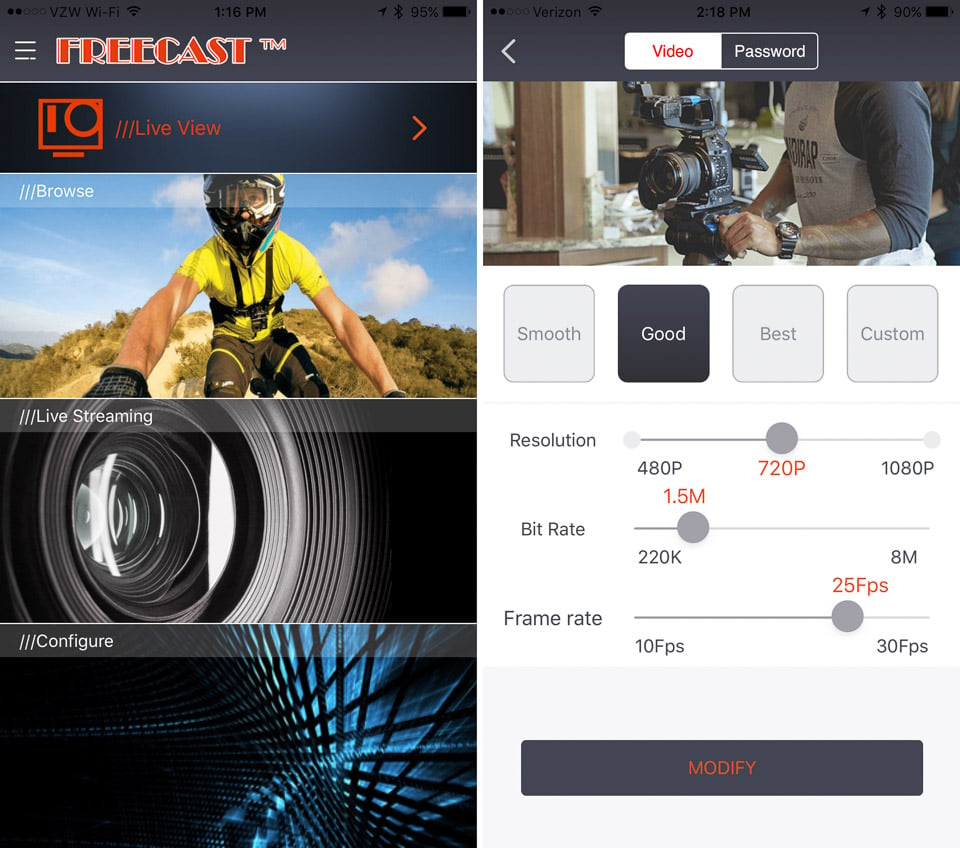 Once connected, video quality was a pretty big letdown on Facebook Live. Now I know Facebook is notorious for dropping some quality to save on bandwidth, but the stream quality I got was sketchy even for Facebook, exhibiting lots of pixelation and stutter. I was quickly reminded of the early days of web video. 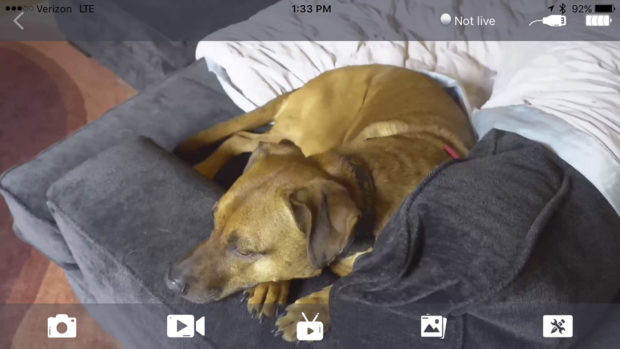 I also struggled to get it to save my setting to grab audio via HDMI, no matter how many times I tried. That’s why you hear my dogs barking their heads off in this video clip, since the app insisted on using the audio from my phone which was still sitting inside the house, rather than what I was speaking into my camera’s microphone. The video also cut off when my phone went to sleep, hence the abrupt ending. I had actually attempted a test broadcast from my car earlier in the day, but it also cut off about 10 seconds into my 20 minute video, so nobody got to see it.

Normally, I can stream a decent 720p video via Facebook Live using my iPhone 7 Plus and LTE connectivity, and it’s totally passable. If I’m fortunate enough to be on Wi-Fi, it’s even better. Now what I don’t know is how much of the Freecast’s quality shortcomings are due to the beta app, how much is due to my data provider’s signal quality, and how much is due to signal loss going from the receiver to the iPhone over Wi-Fi. I’m hopeful it’s mostly an issue with the beta app, given the usable quality of the HDMI video output on the receiver. That said, if you expect to use Freecast for live streaming, it is a risk you take should you choose to pre-order one. You might want to hold off until they’re actually in production to see if the live streaming quality has improved. On the other hand, if you just need a wireless HDMI setup for a live production monitor, the Freecast is good to go as is. Freecast also tells me that they’re already well underway with making improvements to the app before it’s released into production.

Freecast is raising funds for production over on Kickstarter through May 5, 2017, with prices for the entry-level GoPro model starting at $299, and the universal model tested here starting at $499.