I love to cook on the grill. Steaks and burgers cooked inside on the stove just don’t taste the same. The problem is that I hate to clean the grill. All that baked-on goo hardly ever comes off without spending 20 minutes scraping. This is where the Grillbot comes in. It’s a small round robot that’s about the diameter of a gallon paint can, and can scoot about and clean every inch of your cooktop. 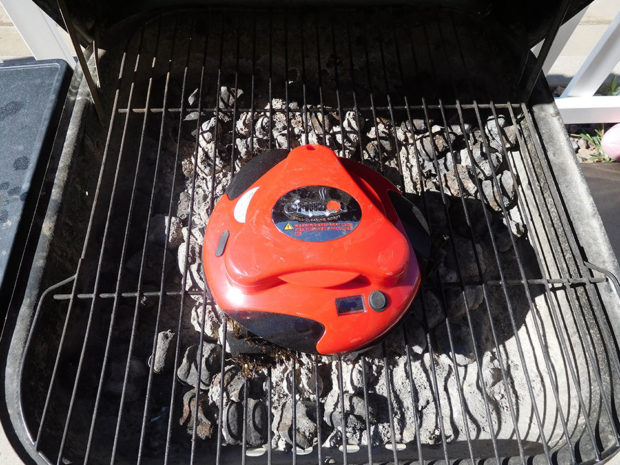 Grillbot has an internal rechargeable battery and three replaceable brass bristled brushes on the underside. It’s much larger than I envisioned it being when I was first asked to check one out. If you have a really small grill, you may find Grillbot too large. I use one of those cheap charcoal grills from Walmart since I had to leave my good gas grill behind when it wouldn’t fit in the moving truck a few months back. It is a 22-inch grill and has one of those warming racks higher up under the lid.

After I charged up the Grillbot, I went outside to see if it would clean the baked on goo out of my grill and it did a very good job. The first time I started it up, it did get caught under that warming rack as the Grillbot is a bit too thick to fit under the rack with the lid closed. However, you do have to clean the grill with the lid closed or the Grillbot will tumble out on the floor. Unlike when you do it by hand, you have to use Grillbot when your grill is cold, or you’ll melt the robot into oblivion. 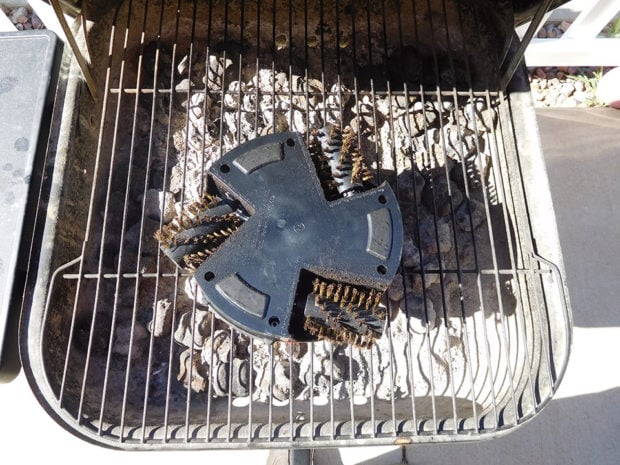 The Grillbot randomly ambles around under the closed lid of your grill cleaning away and when it hits the sides of the closed grill, it turns around and goes another way sort of like those bumper cars you played with as a child. It’s a noisy little beast, so do your neighbors a favor and don’t use this thing at midnight.

It also makes the lid of the grill jump around like it’s about to explode. In fact, I used that noisy, ambling little bot to freak out my daughter by telling her that it sounded like an animal of some sort was on the patio and sending her to check it out. She thought a snake was trapped inside the grill. It was epic.

You can choose three settings for the cleaning time on the bot, one press gives a 10-minute clean, two presses is 20-minutes, and three presses is a 30-minute clean. You get a five second delay to give you time to get it on the grill surface and close the lid. I tried a 20-minute clean on my dirty grill and it finished just as clean as if I had stood there with my normal brush scrubbing away. It’s not like you can’t tell when the cleaning is done based on the lack of noise and motion, but it does have an alarm that beeps as well.

The big thing I liked about the Grillbot is that while it was scrubbing away at the grill, I was inside getting the steaks ready and came out to a grill ready for some heat. A basic Grillbot like mine will set you back $119.95(USD) which is well worth it. You will never have to clean your grill by hand again.