With this unique globe-shaped chess board, you are playing for total world domination. The domination of a small wood world, but still. This awesome chess set was created by Layton, Utah product design student Ben Meyers and his father. 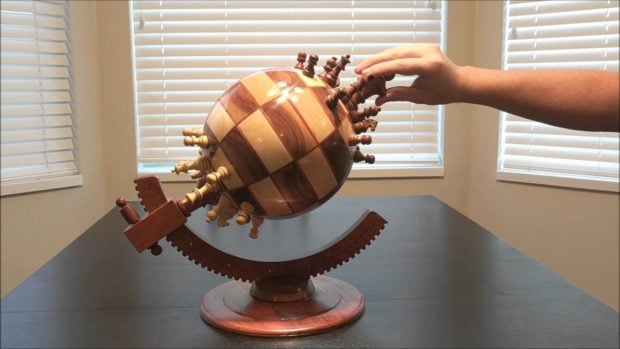 The design looks like part sextant and part globe. It took them several weeks to create this stunning spherical chess board out of walnut, soft maple and jatoba woods. It has magnets embedded under the squares to hold each chess piece in place. You can turn it and move your pieces and feel like you are conquering the world.

It is a functional work of art that is just great to look at, and would be fun to play on.

Here's something you chess players will get a kick out of. This is a magnetic fully functioning sphere chess set. It was had made by me and my father. Quite an interesting spin on the game. Really does change the strategy.

[via Geyser of Awesome via Laughing Squid]

The Inception Table Is a Mind Bender

The Pieces on This Chess Set Coat Rack are Immovable

Mine’s Bigger Than Yours

The Lady and the Dale (Trailer)