There was a time when a mousepad was just a basic thing, designed to keep your mouse gliding smoothly across your desktop. But the SteelSeries QcK Prism goes far beyond this utility, functioning not only as an excellent surface for precision mousing, but as a cool decorative accessory for your gaming surface.

Measuring in at about 11.5″ x 14″, the QcK Prism offers a large mousing area – about twice the size of typical mousepads, giving you lots of room to maneuver. It also comes with dual mousing surfaces – one with a smooth micro-textured cloth, and another which is hard and slick. 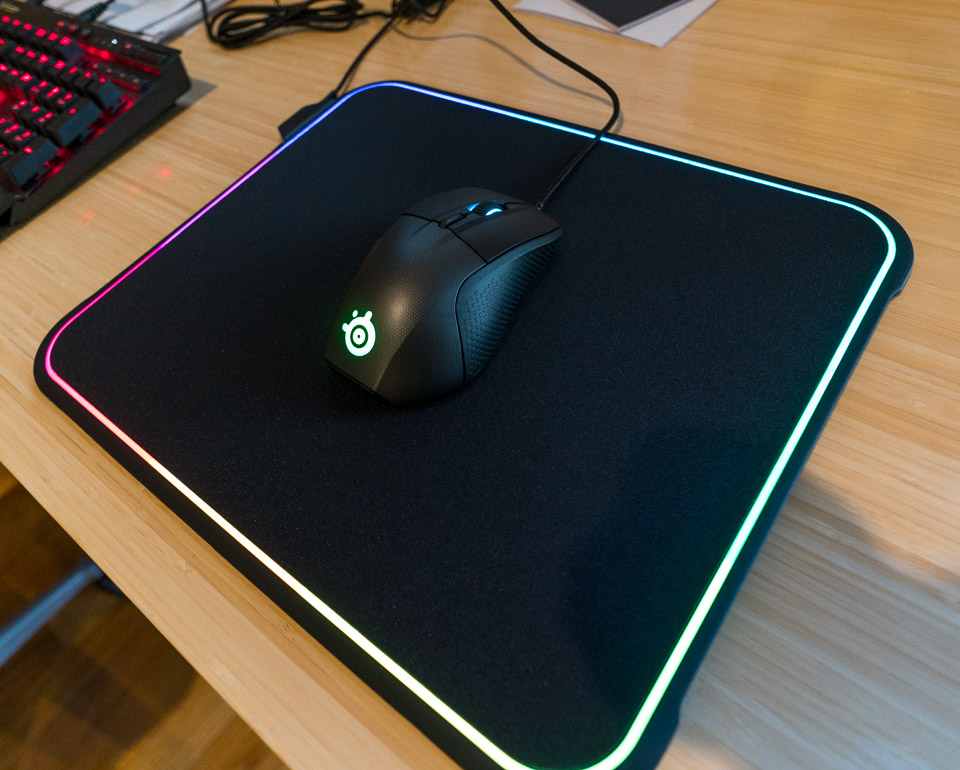 The base of the QcK Prism is substantial, with good heft and a silicon rubberized coating which ensures it’ll never slide around your desk like many mousepads do. The cable for its built-in lighting is also smartly placed off-center so it doesn’t interfere with a wired mouse cable. Switching surfaces is easy. Just flip it over in the tray and it’s held in place by a sort of nanosuction material in the base that keeps it from moving around. 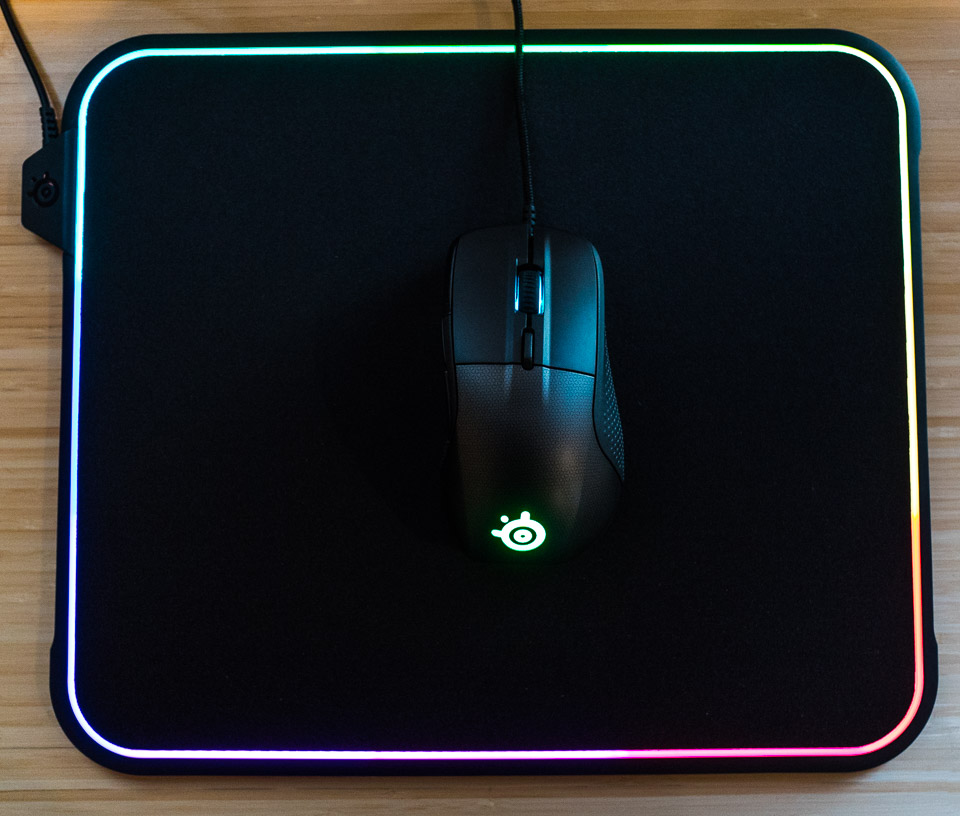 Both sides of the mousepad are great, and which one you use will ultimately depend on whether you favor speed or precision. I found the combination of the fabric side with a SteelSeries Rival 700 (which I’ll be reviewing soon) to be especially good for me, with just the right balance of speed and control for my liking. 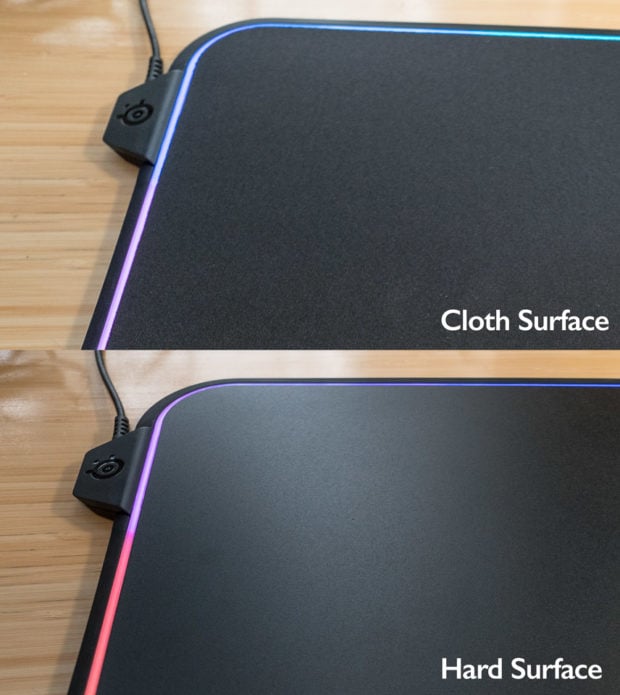 Beyond its aplomb as a precision mousing surface, the QcK Prism’s most dramatic feature is its colorful LED illumination. This highly-configurable light ring has a dozen independent zones, each of which can be programmed to display a different static color or color animation. The included SteelSeries Engine 3 software gives you tons of controls, letting you adjust individual zones, and set color schemes which automatically launch for specific games or applications. 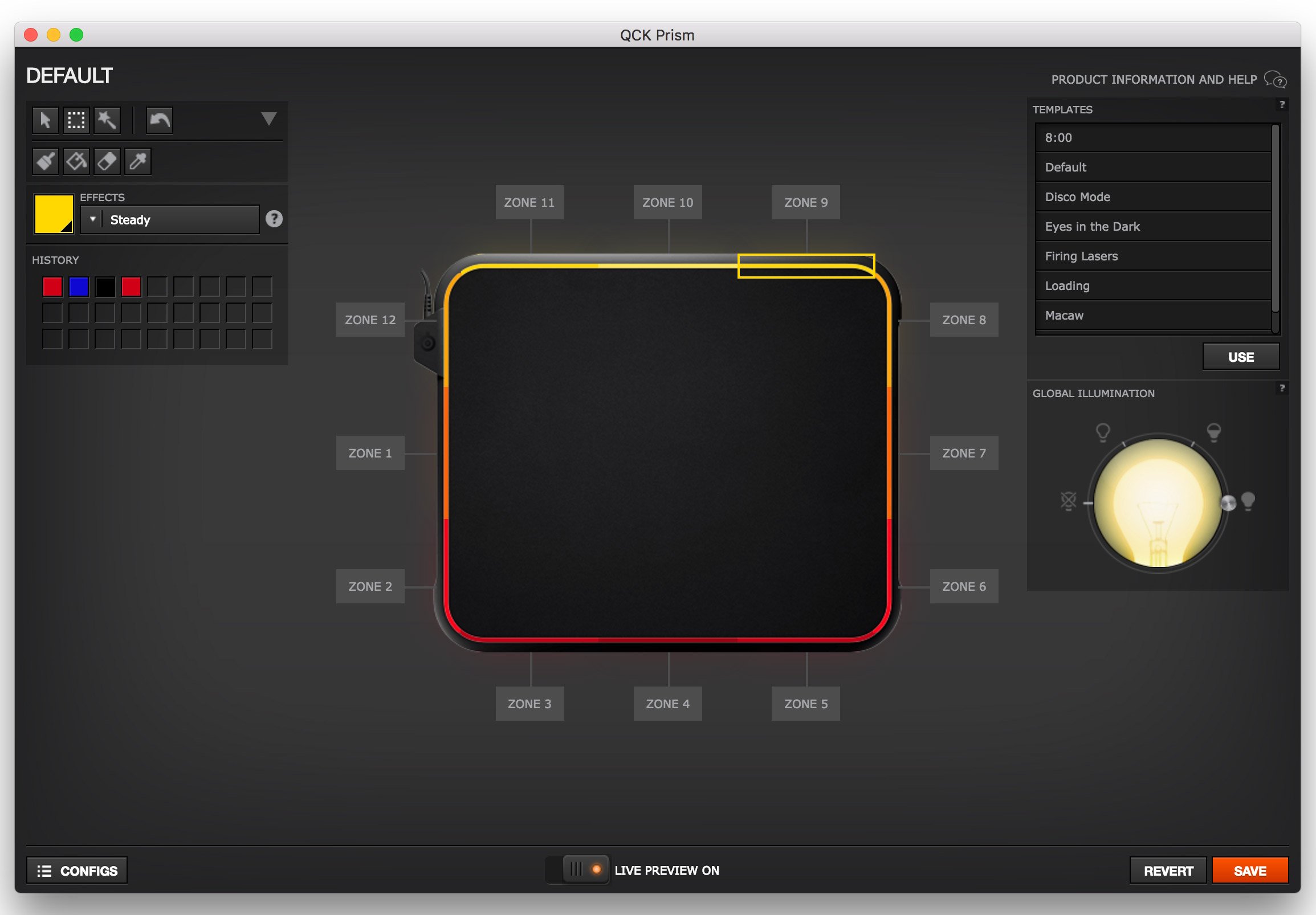 The programming software is compatible with both Windows PCs and Macs, and offers the full range of functionality on both platforms – unlike some accessory maker’s software which clearly shows a preference for Windows. In addition to directly programming the colors for the QcK Prism, you can use it to color-coordinate lighting with other SteelSeries accessories like keyboards, mice, and headphones – this is a particularly neat effect that encourages you to buy their entire line of gear. 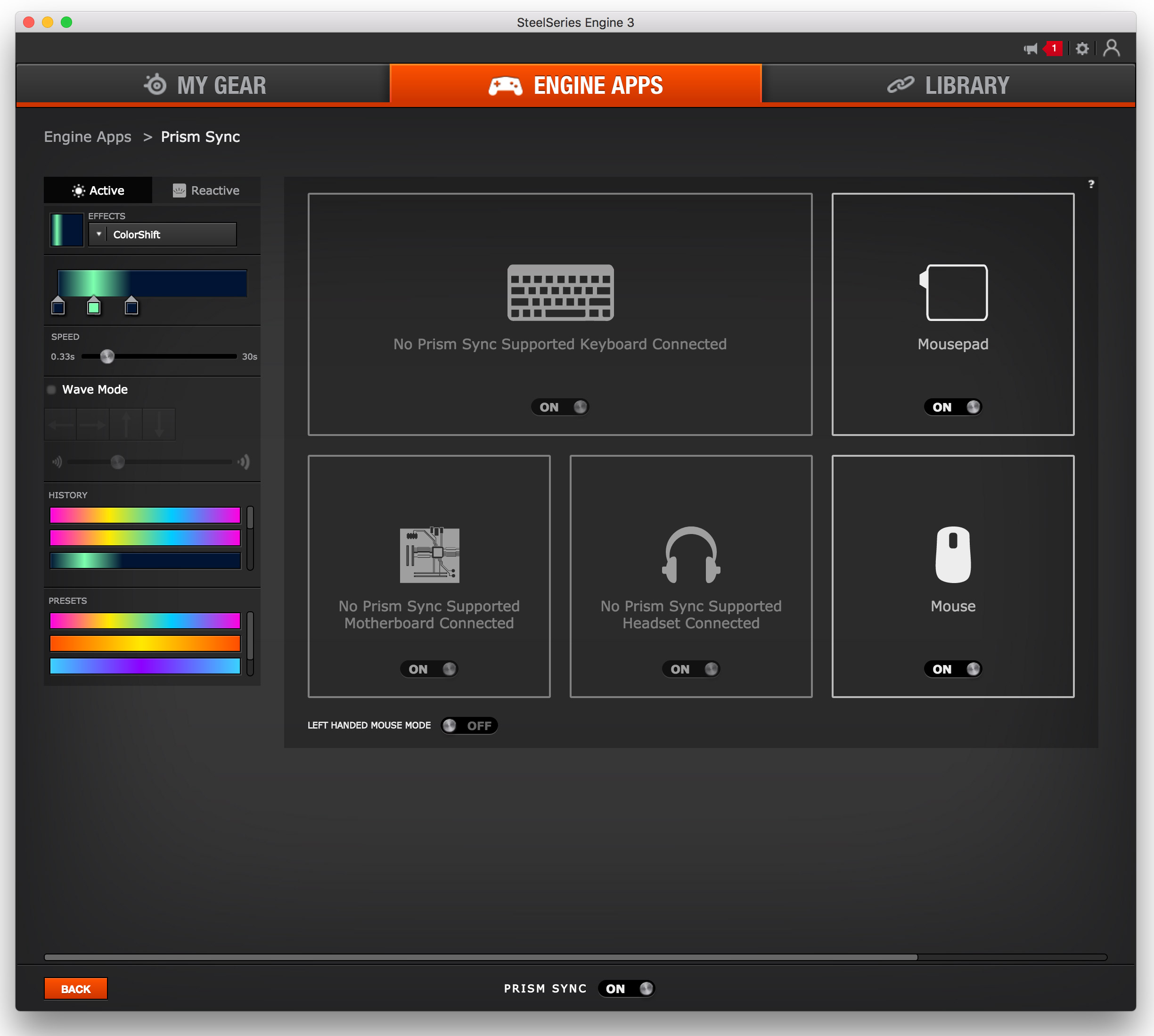 The colors can also be programmed to change based on data fed by games – for instance, there are apps for CS:GO, Minecraft, and DOTA 2 which can display different colors based on health and ammo levels for instance. This functionality is still in Beta, so there are only a handful of games with feature, but there’s an available API and SDK which I hope more game developers will use in time. The interface to SteelSeries Engine 3 peripherals is a simple REST API, so I suppose you could do all kinds of neat stuff with it yourself, if you’ve got some basic programming skills. How about a grid of mousepads set up as a sort of abstract video wall? That could be cool. 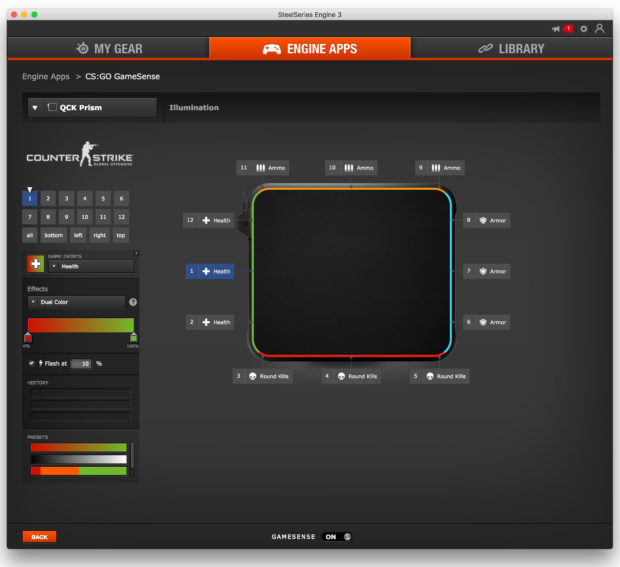 In the end, the SteelSeries QcK Prism is still just a mousepad, but it’s a damned fine mousepad, offering speed, accuracy, consistency, and a really cool lightshow for your desk. You can grab the QcK Prism now for $59.99(USD) over on the SteelSeries website. 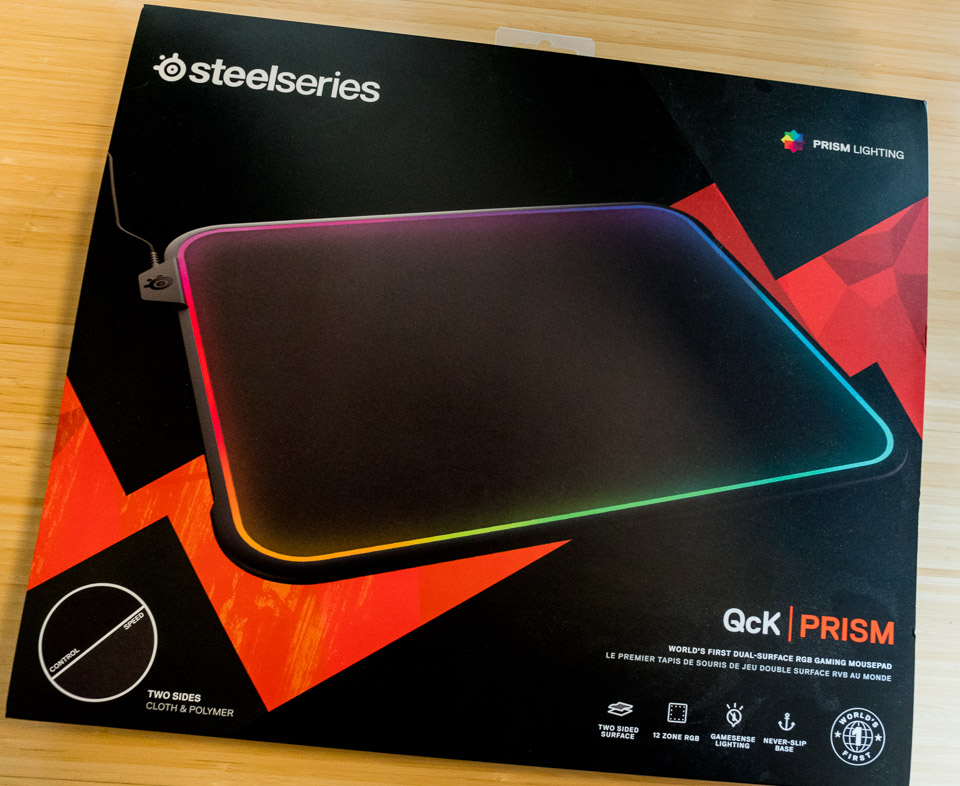