NASA has shown off a concept for a slick, futuristic Mars Rover. It has a shiny black body and huge wheels. In fact, it looks a lot like the Batmobile. Also like a toy truck that you might have seen in the 1980s. Are they planning on sending the Dark Knight to Mars? I hope there is a Batwing vehicle that separates and flies. Seriously though, this 28-foot-long machine was created as a showpiece for its “Summer of Mars” program. 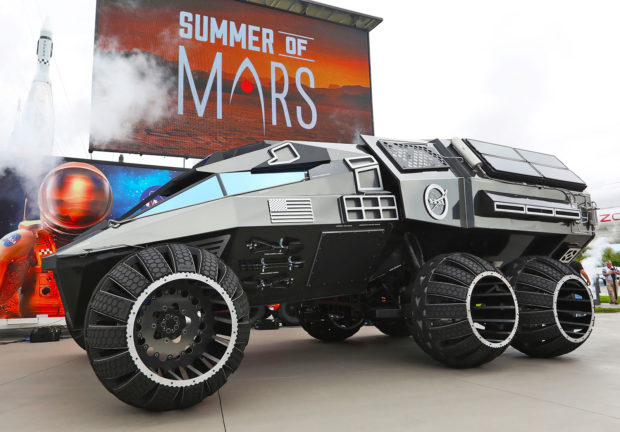 The concept Rover is designed for human occupants, and its front area would have a radio and GPS and that the detachable back would be a mobile laboratory. If it looks theatrical, that’s because it the concept vehicle was designed by the Parker Brothers, the same guys who designed the awesome light bikes for TRON: Legacy.

The actual Mars 2020 mission is sending another unmanned Rover to the surface red planet’s surface to look for signs of past life and to try and determine whether future human settlers could use Martian resources like water and oxygen.

I love the look of this concept. I could totally see it wheeling around on Mars and looking great.