The Milton Bradley OMNI Was an 8-Track Tape Board Game

Boy, it’s been a really long time since I saw or heard an 8-track tape. These technological antiquities were insanely popular back in the 1960s and 1970s, but gradually went the way of the dinosaurs as they were replaced by more compact and longer-playing cassette tapes. But one thing that 8-tracks had that cassettes didn’t was the ability to quickly jump around to different stretches of music which run on different tracks. This led to the use of the cartridges for use in everything from toy robots to playing the voice tracks for animatronics at Disney World.

One of the more interesting uses for 8-track tapes was this unique 1980 board game from Milton Bradley, called the OMNI Entertainment System. 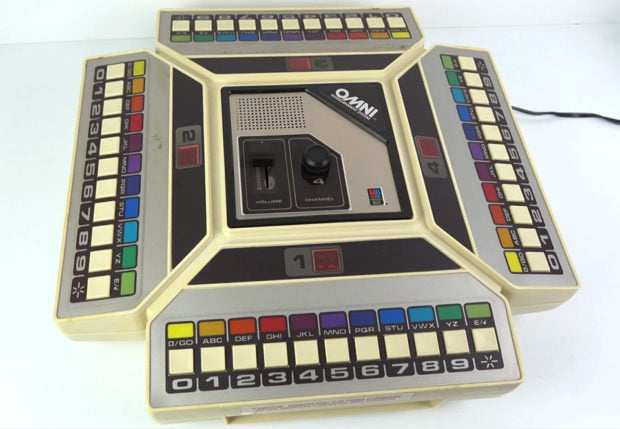 The $119 system offered a variety of cartridges, including quizzes, contests, and party games. This game system took advantage of the tapes’ ability to change tracks, and contained binary data on non-audible tracks which stored scoring data and the correct answers. Players pushed buttons to provide their answers to questions, and the player would read data from a non-audible track, then pause awaiting their answer. Once they entered their answer, it played the correct answer and adjusted their score appropriately.

Techmoan recently got their hands on one of these unusual game systems, and demonstrated how it works in this extensive video:

It’s a fascinating video, and well worth your time if you’re into retro tech or mechanical engineering. If you’d like to get your hands on an OMNI system for yourself, you can still find them from time to time on eBay.