These days, there are a number of ways to play classic Nintendo 8-bit games, from PC ROM emulators to Nintendo’s own NES Classic Edition console. But those methods take the original cartridges out of the mix. There’s something about being able to dust off your old NES cartridges and play them again that has a certain appeal. However, the various NES compatible consoles I’ve experienced have had a basic composite video output, which produces very poor image quality. While that might be more similar to what you played in the ’80s, it’s nice to be able to see the pixel art in these games the way it was meant to be seen. 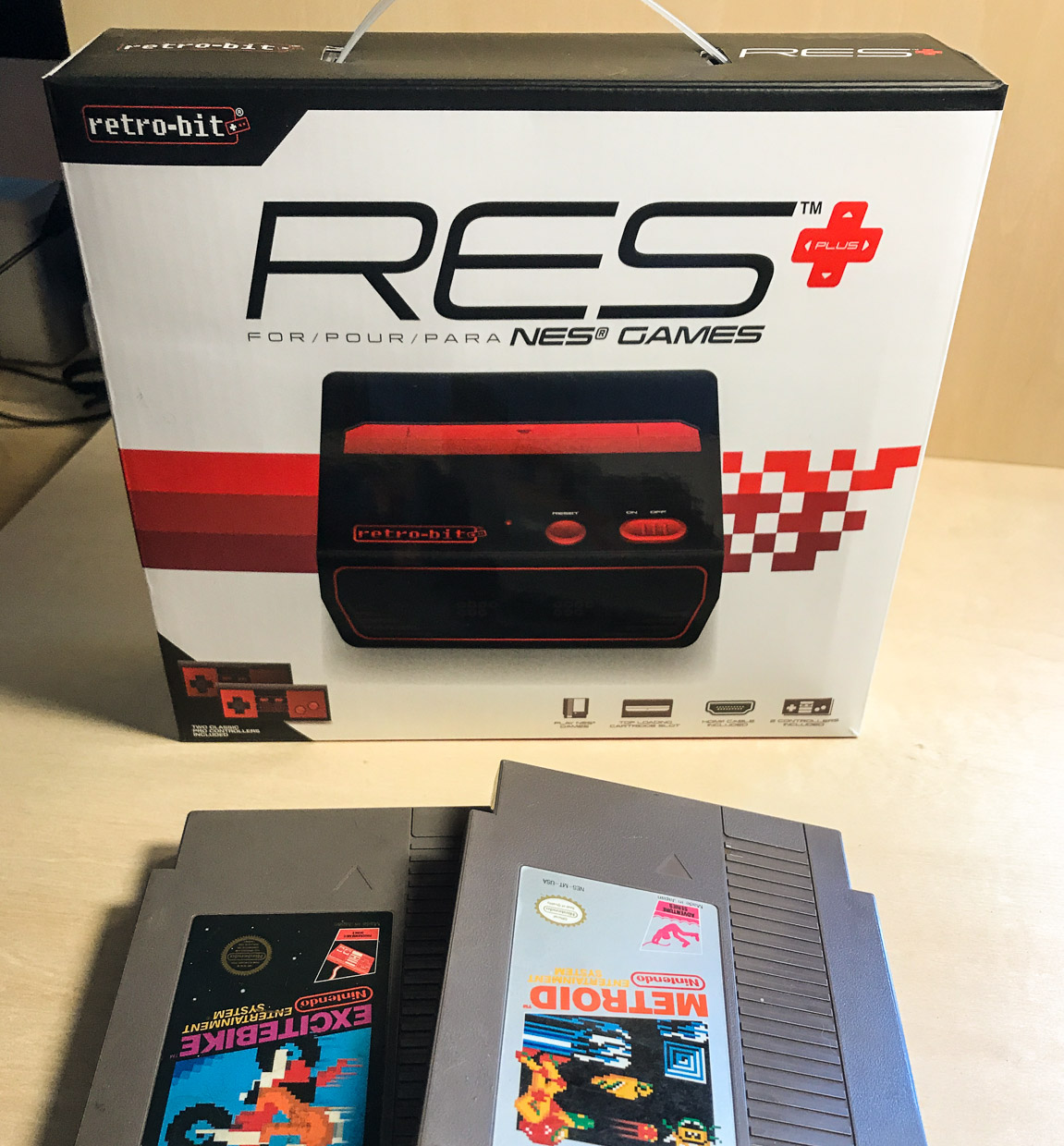 Enter the Retro-Bit RES+ – a reasonably-priced NES compatible game console which offers digital video output via HDMI. This provides for crisp and clean images on modern displays, rather than the blurry mess of composite RCA or S-Video outputs. The image gives you a good idea of how much better HDMI output looks than standard analog AV: 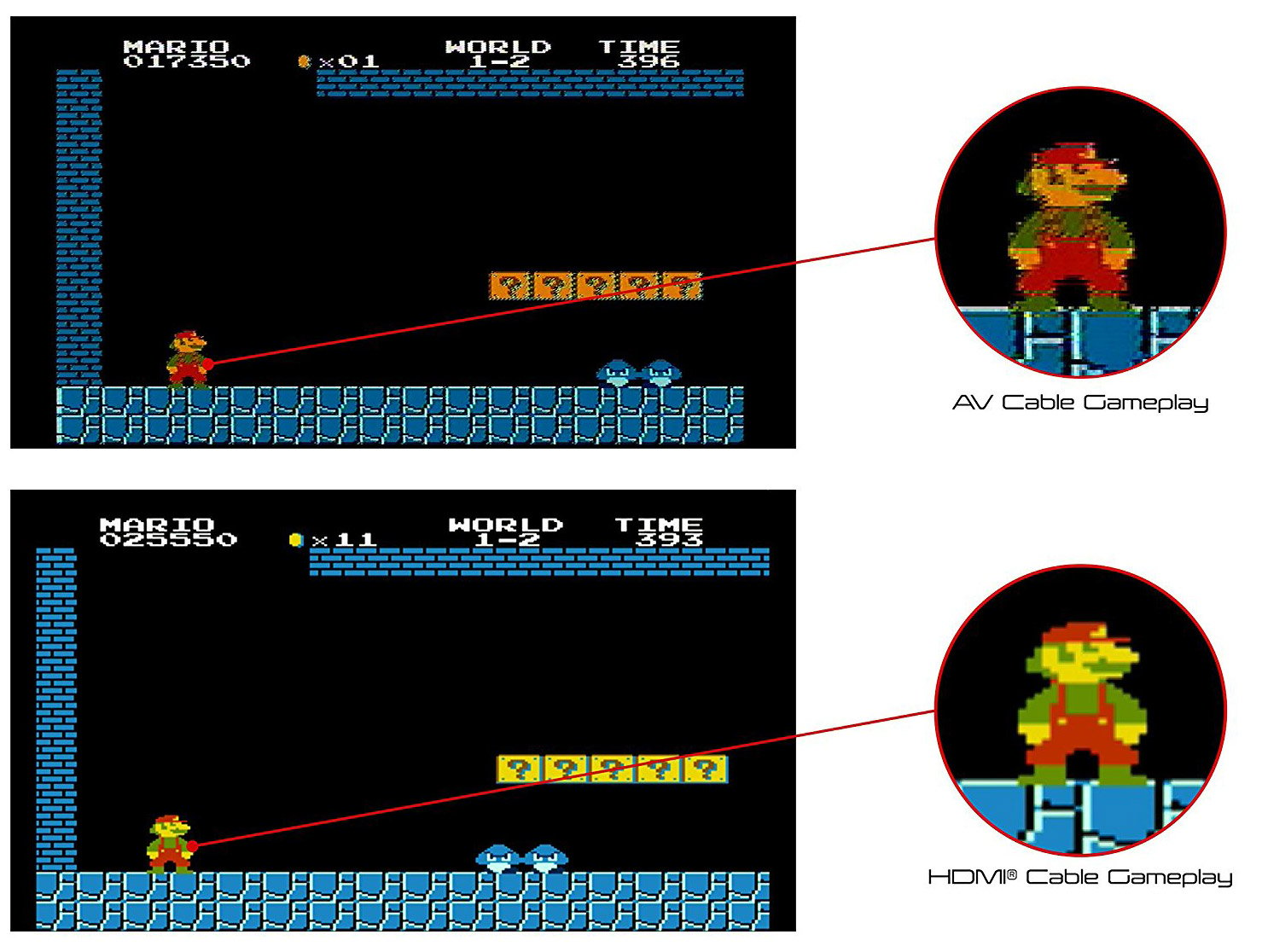 The RES+ is a rather austere black plastic box with red accents, and a single slot for NES cartridges. It’s got a slide switch for power, and a reset button on the front, and power, HDMI, and RCA analog outputs on the back. That’s It. Since it’s a completely hardware-based solution, there’s no menu system or customization options available. Simply connect it to your TV, plug in the included retro-style controllers, and insert a classic NES cartridge. Power it on, and you’ll be playing your favorite NES games in seconds. 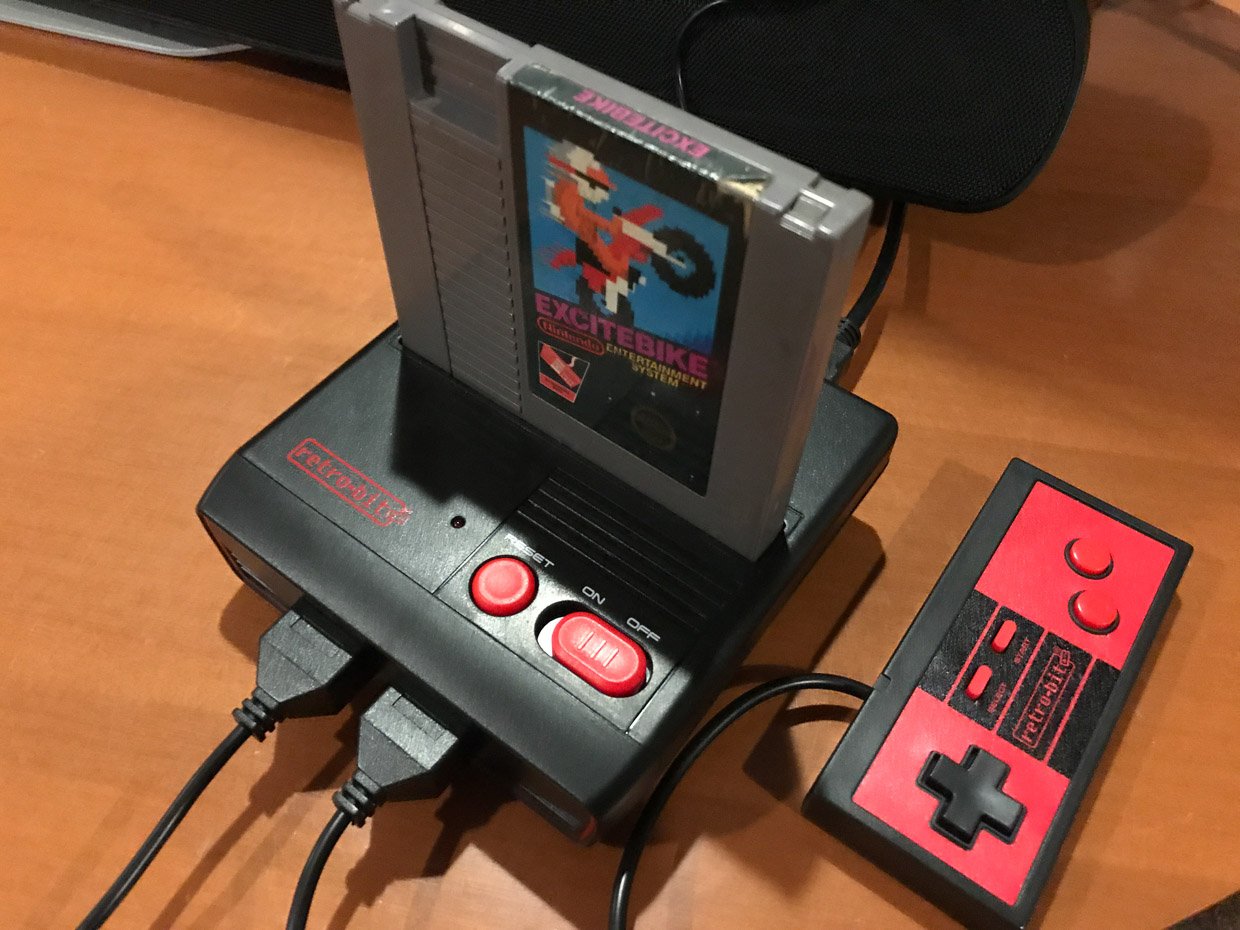 Image quality is the best I’ve seen from an NES-compatible system, with super sharp pixels, and none of the artifacts of analog display setups. Audio quality is good too – I connected my test unit through the digital optical passthrough on my TV to a soundbar, and filled the room with 8-bit beeps and bleeps. Some cartridges do seem to have a bit of a background hum when played at loud volume, but I think this is present even in the original NES systems when amplified. 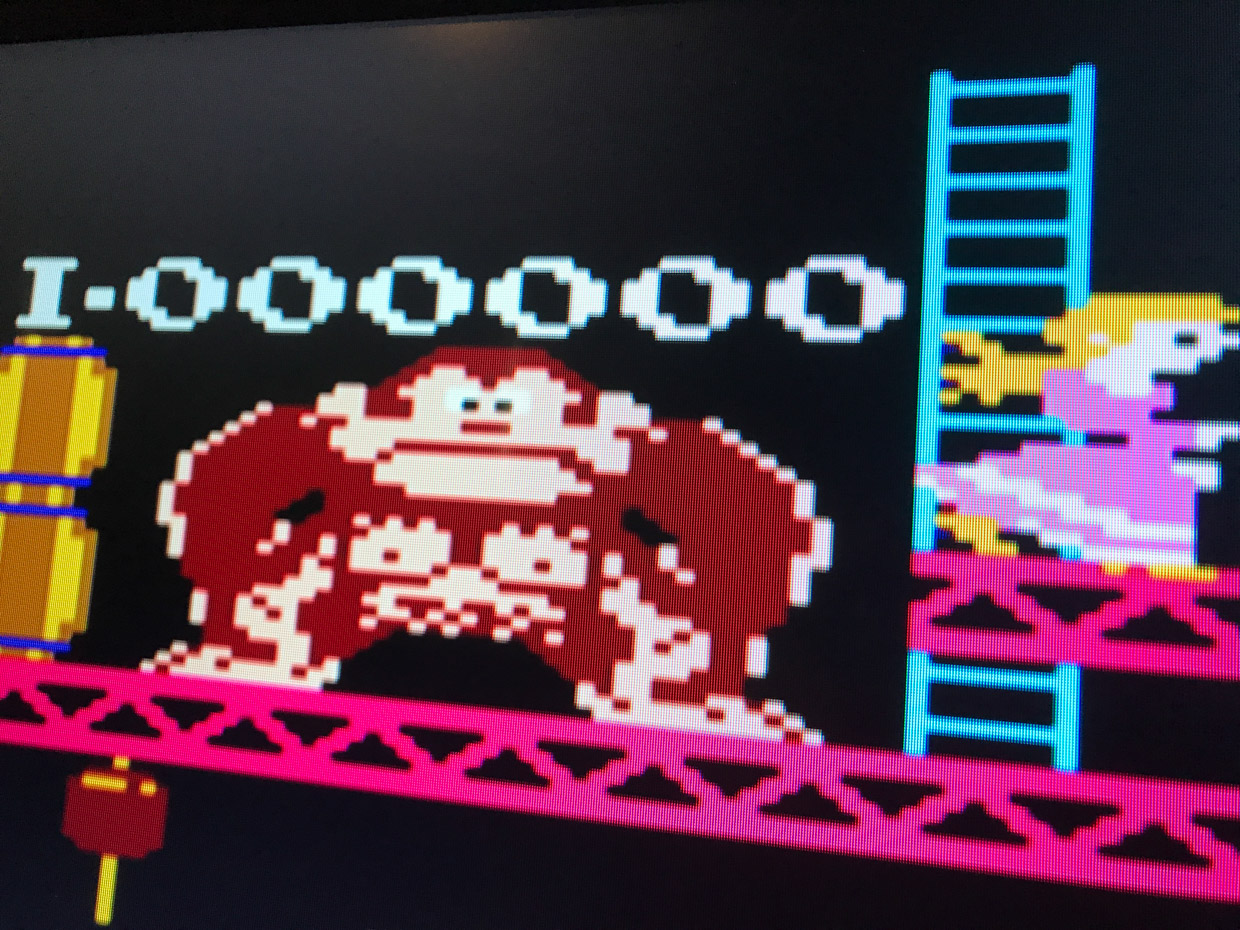 I tried a variety of cartridges, including Metroid, ExciteBike, Super Mario Bros. 2, and a Super Mario Bros. combo cart. They all played without a hitch – though my cartridges are so old, that they each required a little TLC with an alcohol swab to clean their contacts. I highly recommend doing this before playing any classic video game cartridges. 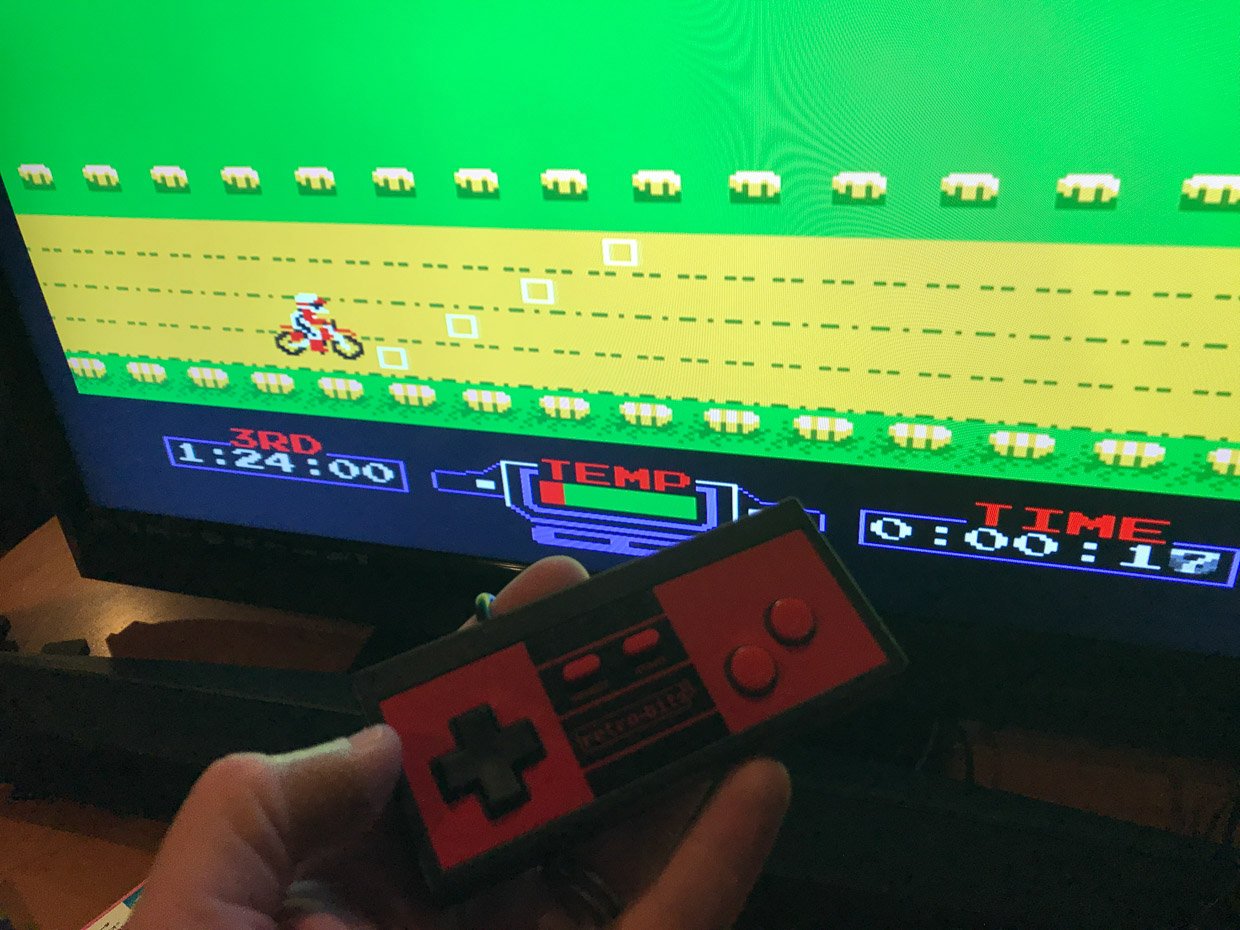 I was also able to Donkey Kong and Mario Bros. USA Famicom cartridges from Japan, using an inexpensive 60-pin to 72-pin adapter. Visuals and gameplay are smooth and accurate across the board for every cartridge I tested, and if there’s any difference in game sounds compared to the originals (as is a frequent complaint with hardware emulation,) I certainly didn’t notice them. 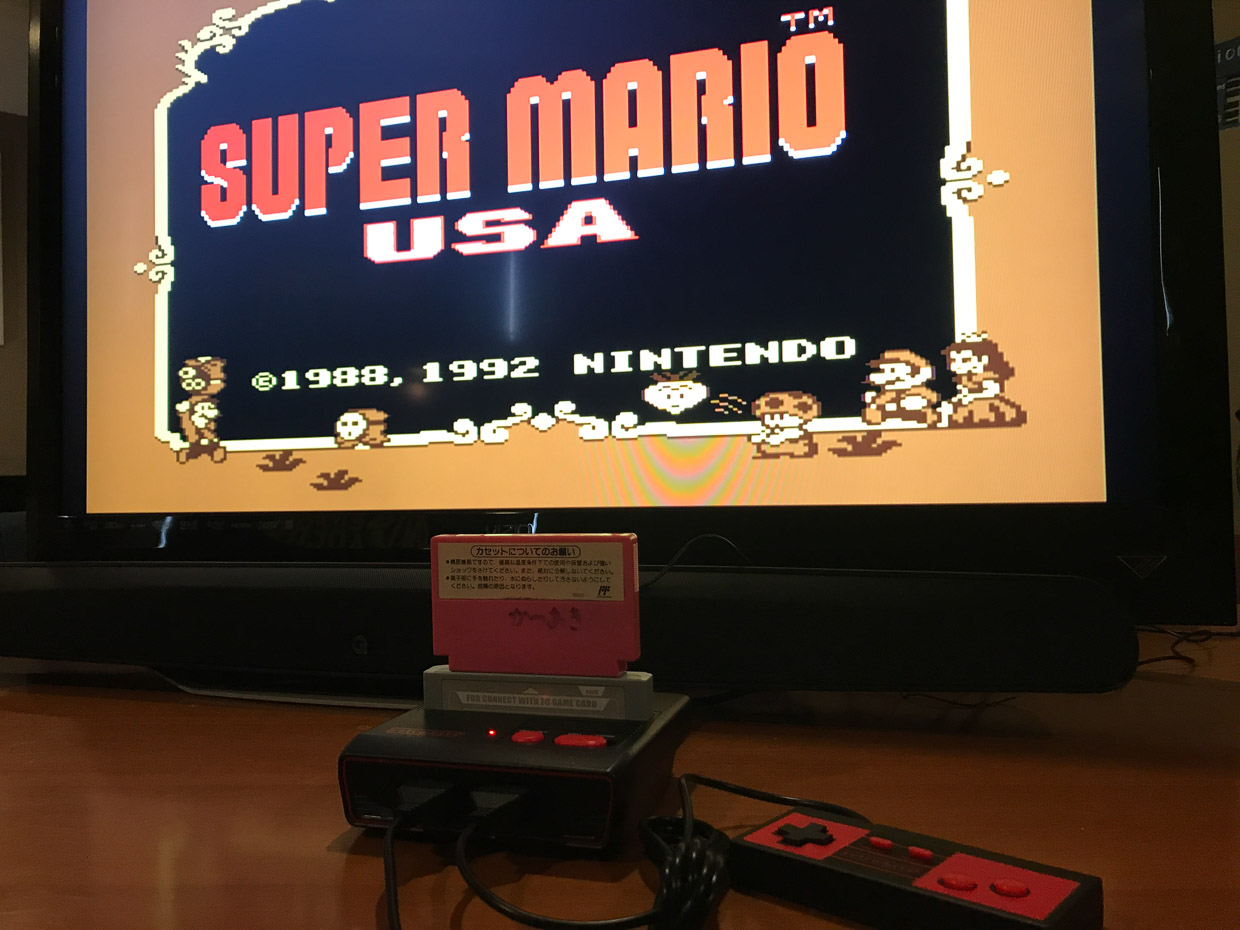 Image quality is as good as I’ve seen from an 8-bit system, though games default to a 16×9 widescreen format at 720p resolution. This means that square pixels are stretched into rectangles, and not in their original 4×3 format. If your display supports squishing a 16×9 signal to 4×3 with side bars, you can overcome this, but it’s something purists should verify their screen can do, should they want to play their games in their original aspect ratio. Frankly, after a few minutes of playing, I really didn’t notice it, and the games were just as fun without black bars. 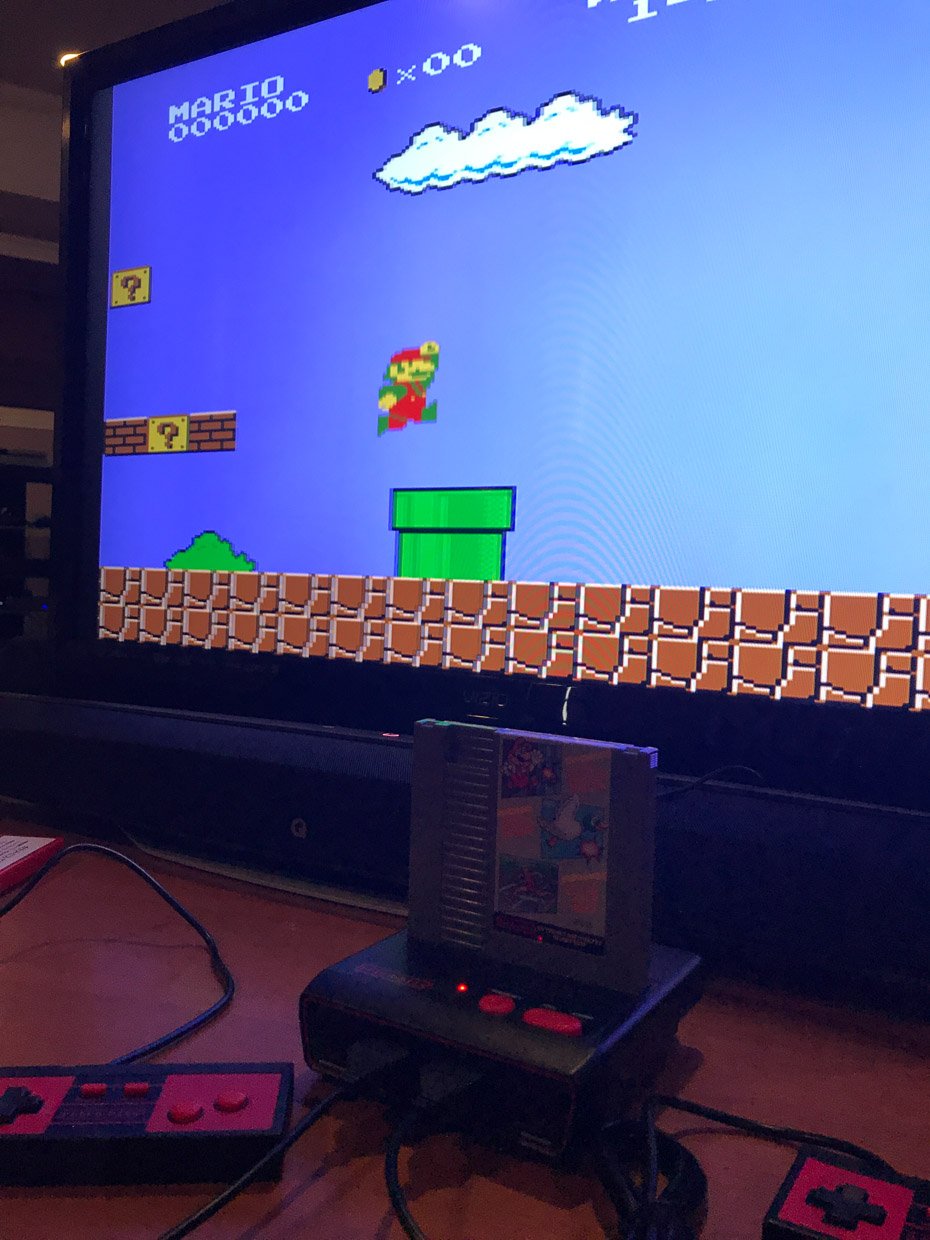 One concern is that at least some cartridges fit REALLY snugly, and require a significant amount of elbow grease to yank them out of the slot inside. After just a few gaming sessions, I noticed that some of the contacts inside are distorting in shape, which makes me concerned that it might not last long. Keep in mind that I’m playing with an early production sample, so hopefully the units that ship out to consumers won’t have this issue. 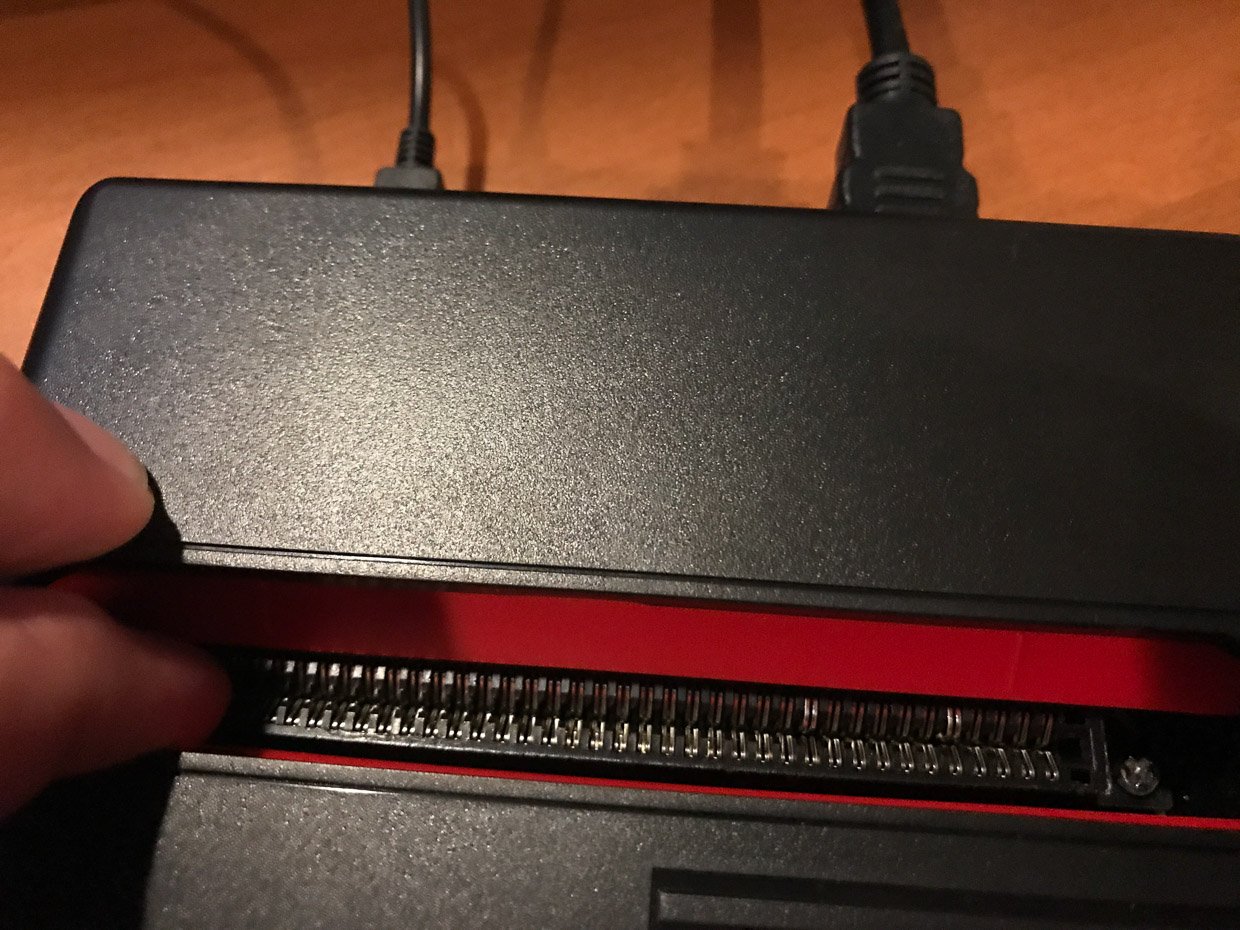 The Retro-Bit RES+ delivers on its promise of accurate gameplay and super sharp HDMI images from Nintendo’s classic 8-bit games. Its inexpensive materials have me a bit concerned about longevity, but for just $39.99(USD), it’s less expensive than a single modern video game.