Snowmen Blown up with Gas Bombs: Frosty the Bomberman

It’s been freezing lately across the country, and many of us are getting more than our fair share of snow too. I’ve had enough of the cold and snow. We need a way to take out our frustrations, and there’s no better way than to beat up a snowman. YouTube channel Beyond the Press has the right idea. They made a video in which they blow up some snowmen with homemade explosives. It’s time to fight back against winter and it’s snow people. 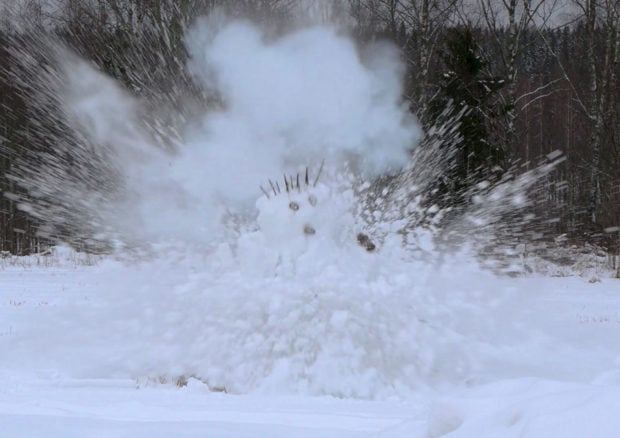 In the video, Lauri and Anni Vuohensilta created a couple of snowmen and then blew them to hell with 100-liter trash bags full of oxy-acetylene gas, which is usually used in tanks for welding and cutting. How do ya like that, Frosty? If you want to jump right to the explody bits, skip to 7:24.

It’s kind of sad seeing these snowmen getting blown to smithereens, but also very satisfying. They look so goofy and sad and when things go boom, they just sort of explode and drop down, collapsing into nothing, becoming one with the snow again. Given the winter we are currently having, I don’t feel too bad for them. I would go on a snowman killing spree if I could. Now thanks to this video, I know how to kill them with gas.