The Sony’s 1986 Watchman portable TV and the Nintendo Switch just got together, and the result is pretty awesome. What’s great is that this hack is collector-friendly, because you don’t have to open or make any modifications to the classic portable TV to make it work. 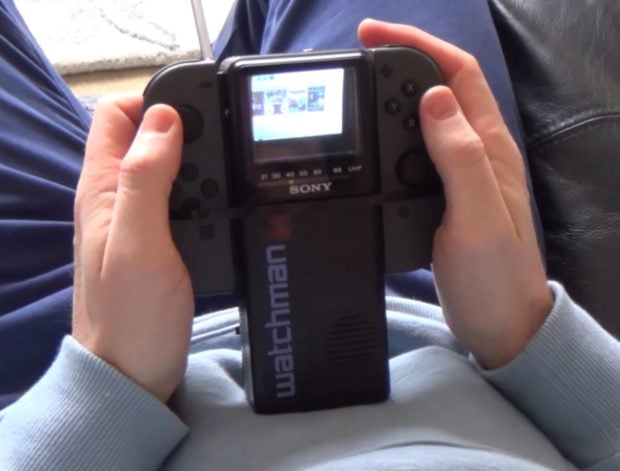 YouTuber My Mate VINCE came up with this interesting pairing. First, he took the Switch controller and wrapped it around the Watchman, securing it with a cable tie. He then connected the HDMI output on the Nintendo Switch’s base station to an analog converter, then piped that into an old VCR which converted the signal to RF. He also wired the VCR to an antenna with a signal booster, creating a low-power pirate TV station that the Watchman could be tuned into. How clever is that?

Sure you could just use the Nintendo Switch’s own screen, but where’s the fun in that? It’s a hack, so you have to hack it. It’s kind of amazing to see modern Nintendo games on that tiny black and white screen. The images look much better than I would have expected them to. I think this is proof that the Sony Watchman’s screen was indeed ahead of its time.

It looks great, but the hardest part of playing games on this thing is the size of the screen. You’ll definitely want a magnifying glass to enlarge the action if you decide to try this.

[via GoNintendo via Gizmodo]