This Rubik’s Cube Has People’s Faces Instead of Colors

Rubik’s Cubes are way too easy for today’s nerds to solve, what with their simple colors on each side and all, so we need to make things harder for them. People (and robots) are solving these puzzles in a couple of seconds now. Putting monochrome images on each cube seems like it might make things a little harder. That’s what Japanese artist Kensuke Koike did. He built a unique Rubik’s Cube that uses photos of people’s faces, instead of colors. 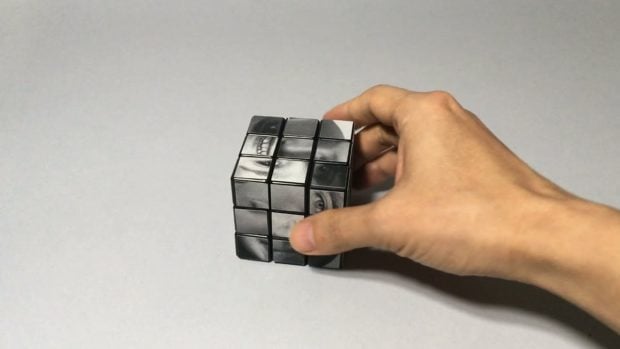 He should have called it “The Picasso” since it jumbles faces up. Since it’s still just a 3x3x3 cube, I’m sure this won’t slow brainy nerds down at all, but it makes me feel better to think so because I can’t solve a flat one-sided Rubik’s Cube.

Anyway, if you want to make it really hard for people to solve one of these cubes, we need each of those tiny face sections to individually turn as well. That would stop puzzle geeks dead in their tracks. I would build something like that, but that requires me to be as smart as them and if I was that smart, I wouldn’t be so jealous and want to build one in the first place. You see the conundrum right? Stupid smart people.