Can you believe that it’s been 50 years since the science fiction film 2001: A Space Odyssey premiered in theaters? It’s a far more esoteric movie than Star Trek or Star Wars, which is probably why there isn’t much in the way of merchandise to collect.

So it’s nice whenever they drop anything 2001 related that we can buy. Hallmark has come up with an adorable collectible in the form of Dave Bowman’s character. A Dave Bowman plush toy. Open the pod bay doors to cuteness, HAL. 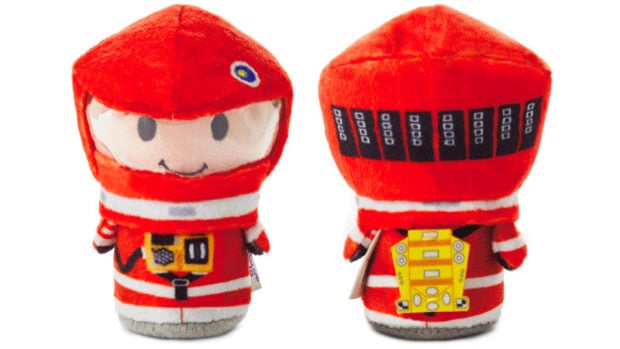 Hallmark’s cute little version of Dave Bowman is wearing his Discovery One red spacesuit and ready to float around space to the tune of Blue Danube. This plush will stand for some time as the cutest 2001 collectible in existence. I can’t see anything topping it. Good move Hallmark, now just give us a squishy monolith and that shuttle with the grabbing claws.

It will cost you only $8, but you won’t find them in Hallmark stores at your local mall. Instead, you will need to hit up the Hallmark website. This is a limited edition, but the company doesn’t tell us exactly how many they’ll make. 2001, perhaps?

[via AFI via Gizmodo]