In a recent episode of Make It Real from YouTube channel The Hacksmith, the crew built something pretty epic – a real-life version of Doomfist’s gauntlet from Overwatch. This thing is no joke. It weighs in at 45 pounds and packs approximately 2,600 pounds of pneumatic punching force. 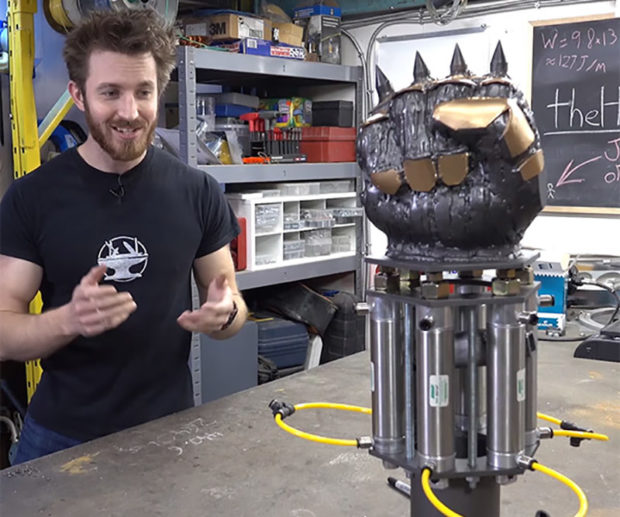 Naturally, this power is used to destroy a bunch of random stuff. Stuff like mannequin heads, concrete blocks, a bicycle helmet, computers, speakers, ceramics, doors, even a 70″ plasma TV. The TV puts up the best fight. If you want to skip straight to the punching, it starts at 8:15.

Not to get too nerdy, but if you watch closely, it looks like it’s destructive power is mostly due to its weight, and not because of its pneumatic punch. You likely would get similar results without the pneumatics and just started smashing things with a 45 pound metal fist.

It’s still a pretty cool working prop though and its a fun project for Overwatch fans if you want to attempt to make one for yourself. But if you do, you better work out first, because this thing is super heavy. You’ll need a very strong arm to wield this heavy weapon.