Every time we’ve seen a TIE Fighter in the movies, it’s been zooming through space or sitting on the deck of an Imperial battlestation. But this TIE Fighter can actually drive on the street. This land-based TIE Fighter was built by Queensland, Nova Scotia man Allan Carver. This Imperial vehicle on wheels is powered by mobility chair motors and can hit speeds of 6 mph. I just let out a little Wilhelm scream. 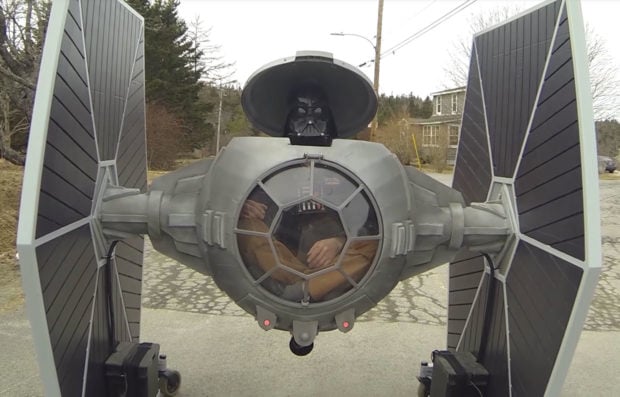 It can be piloted remotely or from inside the cockpit via radio controller. It also makes TIE fighter sounds as it drives along. Allan was inspired to build it last December during the release of The Last Jedi. Now you just need a few X-Wings that it can chase, so they don’t shoot some proton torpedoes into a porthole and blow up the whole damn town. If you shoot them off the road, the Imperials might get their own medal ceremony for once.

See how he made it in the video above, and if you are daring enough, you can try to make your own. It probably won’t look as good as Allan’s. Honestly, he did an awesome job. I would love to take this for a ride around town. Too bad it doesn’t actually shoot lasers. That would really help with traffic. Which is why you need a Star Destroyer…. Hmmm. Hey, Allan…