How do you think Mario got so rich? I know, it’s not so simple in our world. We don’t have blocks that give us coins when we hit them. Actually, yes we do. If times are tough and you could use a little boost in your finances, just bonk your head against this Mario block. 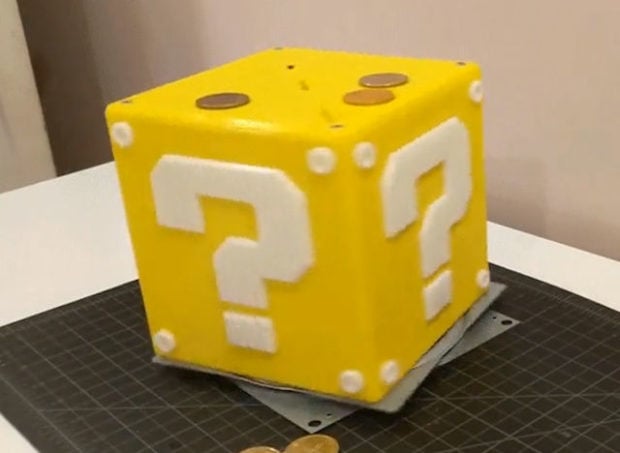 Jonathan Whalen built a real-life version of a Super Mario Land question block that actually spits out coins. As I’ve asked so many times in the past: Why can I not buy an official version from Nintendo?

This is mostly all 3D-printed. Inside there’s an electric stepper motor, and a vibration sensor to detect when the box gets hit. An Arduino Nano controls all the hardware. Sadly, those coins don’t just appear out of thin air. You’ll have to feed the box all the $1 gold coins it shoots out. So we won’t get rich after all. Bummer. You are simply getting out what you put in.

That okay though, because this is an awesome creation. I would pretend to be Mario, and punch this thing all day long if I had one. It’s like a reverse bank. Sure you can put money in and save, but it will just spit it back out.