Over the years, laptops have kept getting lighter, more powerful, and sleeker. Among the leaders of the ultrabooks on the market is Razer, with their Razer Blade Stealth. Keep in mind that unlike some of the more heavy duty laptops that bear the Razer badge, this one isn’t really for serious gaming – at least not without additional hardware which I’ll tell you about later. On the other hand, this svelte computer weighs in at under 3 pounds, and is still powerful and fast enough to handle all your everyday tasks for work, school, hobbies, and casual gaming. 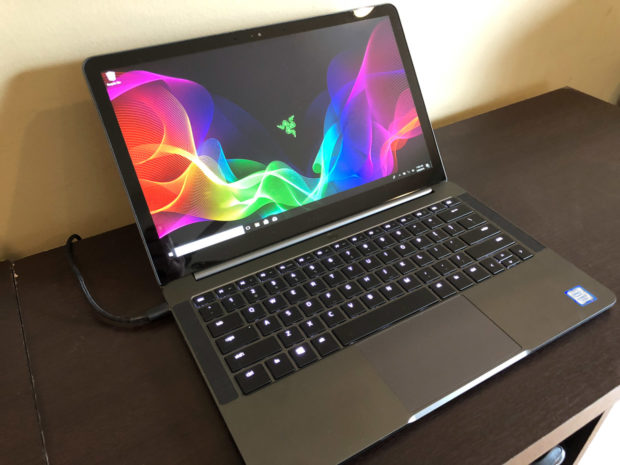 The latest Razer Blade Stealth features a sleek and minimal design, measuring just a hair over 0.5″ thick at the hinged edge. At least from the surfaces that I can see, build quality is excellent as well. It packs a 13.3″ touchscreen display, running at a native 3200 x 1800 resolution, resulting in incredibly crisp and vibrant images, and the ability to easily work with multiple windows or gigantic spreadsheets with lots of columns and rows. 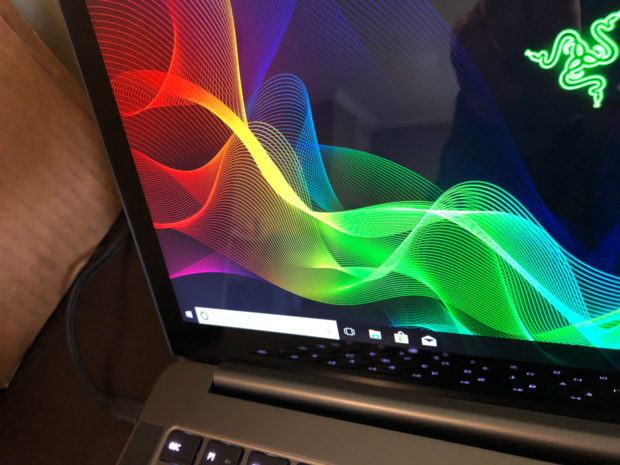 The system is available with either a 7th-gen Core i7-7500 U dual-core CPU, or an 8th-gen Core i7-8550U quad-core CPU. My review unit came with the dual-core processor, which is reasonably fast for everyday tasks. It managed to turn in a respectable Geekbench multi-core score of 7098, and an OpenCL Compute score of 20928. However, its on-board Intel UHD Graphics 620 GPU isn’t anything special, with a respectable 3DMark Cloud Gate score of 6820, but an anemic 3DMark score of just 393 on the intense Time Spy 1.0 benchmark. 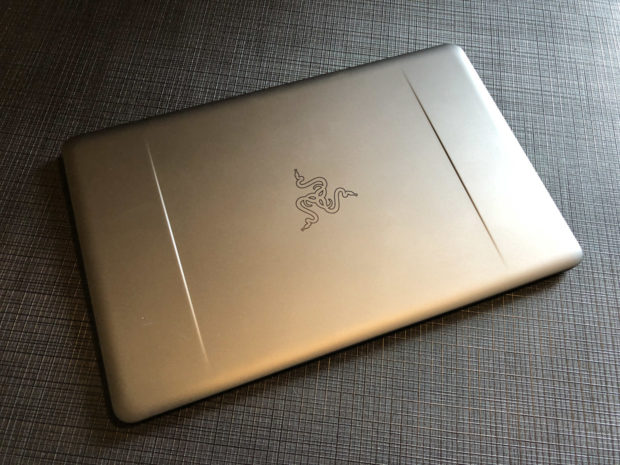 There’s 16GB of dual-channel DDR3 RAM built in, but sadly no ability to upgrade beyond that. Still, that’s plenty for all but the most memory intensive tasks. For super-fast drive and device connectivity up to 40 Gbps, there’s a built-in USB-C port with Thunderbolt 3 support, which can also be used to connect the optional ($499.99) Razer Core V2, which provides the laptop with support for high-end desktop video cards from AMD and Nvidia, so you can play all those graphics-intensive games the on-board GPU can’t handle. 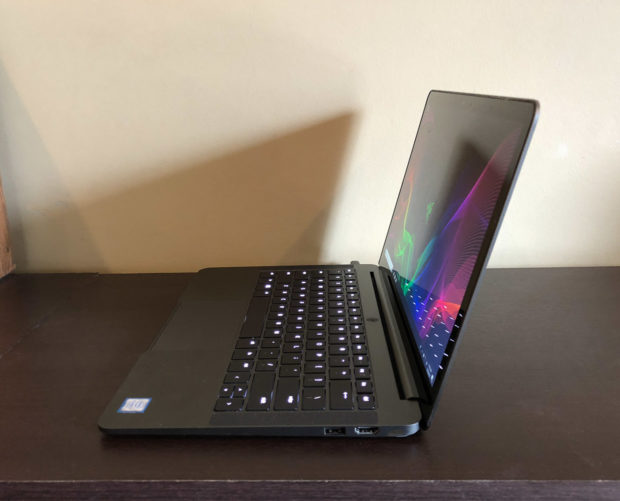 Unlike Apple’s recent MacBooks, which require an external dock for other connectors besides USB-C, the Razer Blade Stealth has USB 3.0 ports on both the left and right sides, a 3.5mm headphone jack, and a full-size HDMI port. Its wireless connectivity supports 802.11ac and Bluetooth 4.1. I was able to enjoy about 400 Mbps of my Gigabit internet connection via its Wi-Fi connection – that’s better than most other laptops, tablets, and smartphones I’ve tested here on my Wi-Fi router. 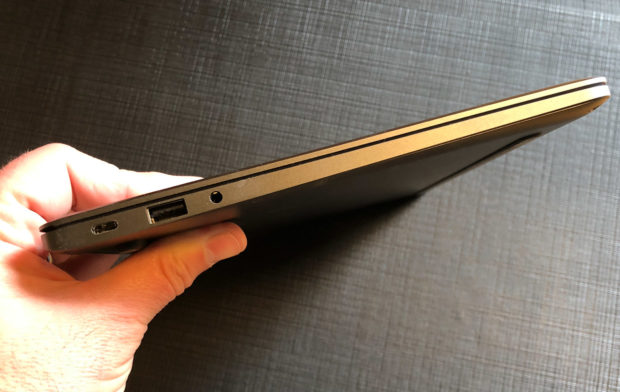 Razer offers the Blade Stealth in either a gunmetal grey body like the one shown here, or in black with an illuminated Razer logo on its lid. The gunmetal version comes with a bright white backlit keyboard, while the black version packs a programmable full-color Razer Chroma keyboard. However, the minimum config of the black model comes with the more expensive and faster quad-core CPU as well. I found the keyboard to be quite impressive – offering good feedback and fast typing without being cramped for my big fingers. Flanking the keyboard are two impressively loud vertical speakers which offer good stereo separation due to their smart placement. 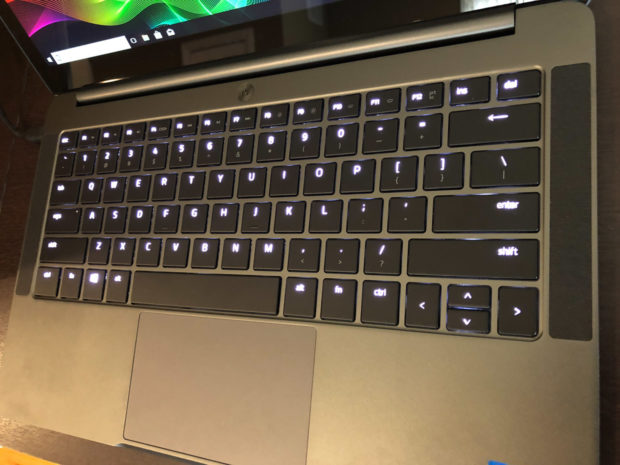 One thing I really like about the Blade Stealth is its power pack, which is more like the size of an oversize lipstick case than a traditional, heavy power brick. This keeps it easy to travel with, and adds minimal weight to your bag when you hit the road. Given its size and weight, the Blade Stealth offers good battery life too – turning in just a little under 9 hours on a charge with typical usage. 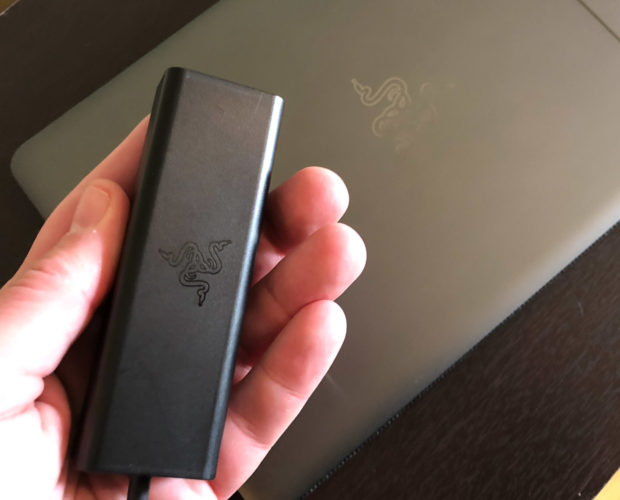 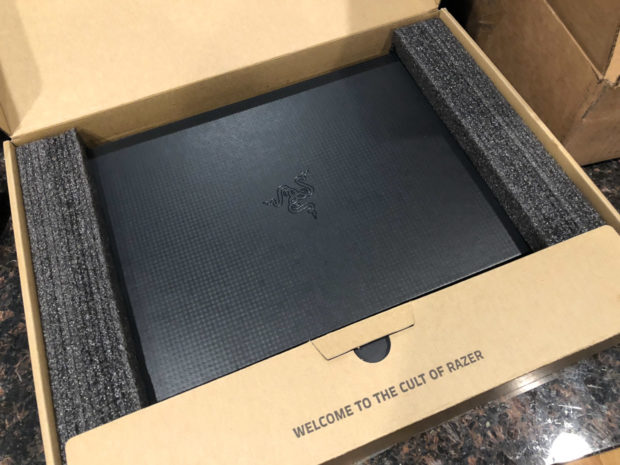 In conclusion, the latest Razer Blade Stealth is a well-built, good looking ultrabook with great design, a razor-sharp display, above average connectivity, a good keyboard, and a zippy CPU. Plus, it’s got the ability to become a serious gaming machine if you connect the Razer Core V2 and a good graphics card.