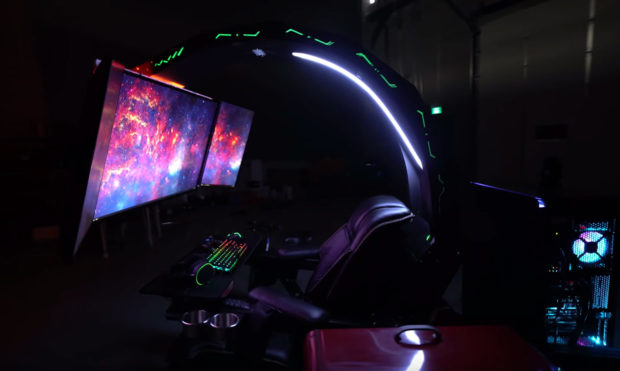 This rig features “a zero gravity reclining workstation game chair by Imperatorworks, a 43-inch UHD 4K monitor by LG [plus side monitors], a beefed up Xidax desktop gaming PC, and much more.” I also admire his snack and drink station. This is a guy is never gonna game while hungry. RGB everywhere son!

Basically, this is a video of Lewis bragging while playing Fortnight and bragging some more. That’s okay. My gaming rig cost more than a kidney transplant, and is powered by my imagination, so it’s bigger than yours. I can’t even play Fortnight, because the game has to up its specs to be compatible with it. So there.

Seriously though, this rig is pretty cool and I hope he invites me over to play some games before it is obsolete in 3 to 5 years. Anytime is cool actually. I’ll be at the snack and drink station, my friend. No, you play. I’ll watch? Do you have any more kettle chips?