Kids In Transformers Costumes Are More Than Meets The Eye

Kids love to dress up in costumes, and there’s no better outfit for the little ones than some giant transforming mechs. Check out these three kids showing off their adorable Transformers costumes, which look awesome. There’s Optimus Prime, Starscream and Bumblebee. The costumes are not only perfect, but these kids are pros at the transforming game. They’re much better than in the movies, if you ask me. 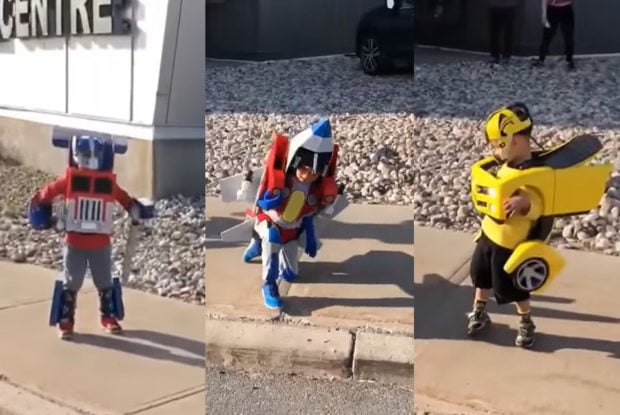 They do take a little while to transform, because kids are easily distracted, but once they do, you’ll want to watch it again and again. Sadly, the whole thing was filmed in portrait mode, but at least they caught it on video so the rest of us could see it.

I hope you are paying attention, Michael Bay. Look how well these kids transform. Look at how effortless that is. It looks natural. And Shia Lebouf is nowhere in sight, which I also love. Although I did feel that this vertical video masterpiece could have used more Megan Fox.

This is some next level Transformers action right here. These kids get it done. We know they can transform, now they just have to practice rolling out.

Whoever made these costumes designed them perfectly. And even filmed vertically, this footage beats Michael Bay any day. I would pay to see this in theaters over his stuff.