Fallout 76 Teaser Trailer: The Official Vault of the Tricentennial

This is the best news I’ve heard all day. A new Fallout game is coming! It all started with a livestream on Twitch that was a video of a Vault Boy bobblehead in front of a screen that featured Fallout’s “Please Stand By” alert. Eventually, that livestream revealed of a new game: Fallout 76. 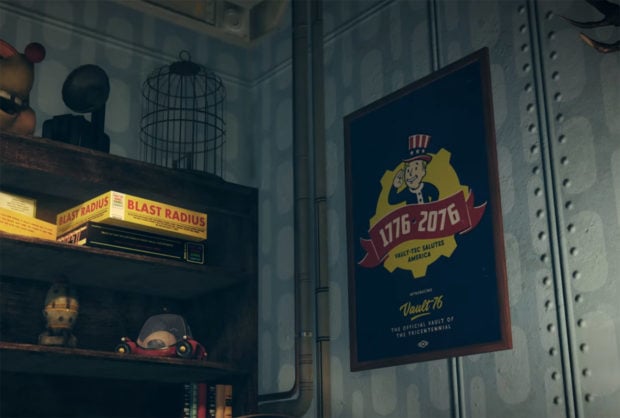 We know almost nothing about it and yet I am still excited. We will learn more at Bethesda’s E3 press conference next month. Until then let’s all watch this teaser trailer endlessly for clues. The trailer is similar to the teasers for other Fallout games, but Fallout 76‘s title suggests that it won’t be part of the main series. The soundtrack may provide some clues though. It’s a cover of John Denver’s “Take Me Home, Country Roads”, so the game may be set in West Virginia or somewhere nearby.

It looks like the residents of Vault 76 just finished celebrating “Reclamation Day” too. We also hear a voiceover on a TV saying “When the fighting has stopped and the fallout has settled, you must rebuild.”

Word has it that the game will be an online multiplayer survival RPG with some base-building elements. The game will be launching for Xbox One, PS4, and PC, but no there’s been no mention of a release date yet.