Way back in elementary school, we had to read a certain number of books each week and it seemed that all the good reads were always checked out. That’s when I took some initiative and meandered over to the non-fiction section and happened upon a book on historic natural disasters. The eruption of Mount Vesuvius in 79AD and the resulting destruction of Pompeii was one of the highlights of that book. I can’t imagine how terrible that was for the people living in the city, but third-grade me found the tale quite spectacular.

Fast forward many years and archaeologists have been studying the a new area of Pompeii’s remains, and have found something incredible. The image you see here might look like some Halloween decorator going for a laugh, but these are actual skeletal remains uncovered at the site. Apparently, this poor guy made it through the initial eruption of the volcano only to be crushed by a massive hunk of stone. 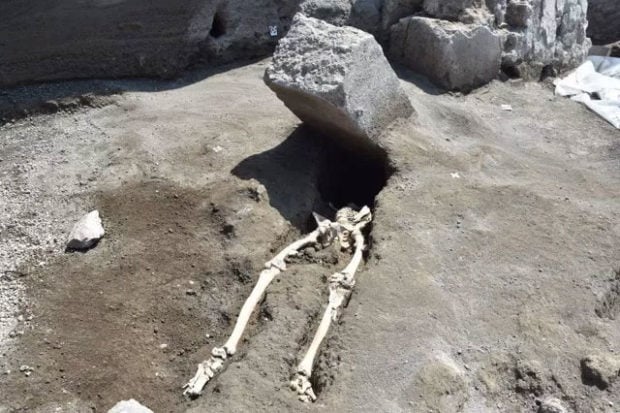 The scientists at the site think the massive stone was once part of a door and was flung into the air by explosive volcanic gasses during the eruption, when it landed on the guy’s head and chest. The pyroclastic flows then covered his remains leaving him entombed there to be discovered some 2,000 years later.

#Pompeii The thorax was crushed by a block of stone, the body hurled back by the force of the pyroclastic flow, in a desperate attempt to flee the fury of the eruption. The first victim which emerges in the site of the new excavations of Regio V, does so in this dramatic position pic.twitter.com/qHZCS0W0Zd

Scientists say the crushed figure was originally inside a building at the intersection of Vicolo delle Nozze d’Argento and the Vicolo dei Balconi, apparently roads in the ancient city. The discovery was made during excavations of the Royal V section of the city.