This Sun-seeking Robot Flowerpot Will Keep Your Plant Alive

The Vincross Hexa is a programmable six-legged robot that looks all creepy walking on its bug-like legs, but now it has found its purpose thanks to Vincross founder Sun Tianqi. Now, the robot’s one job in life is to make sure that a single plant always get the sunlight it needs. 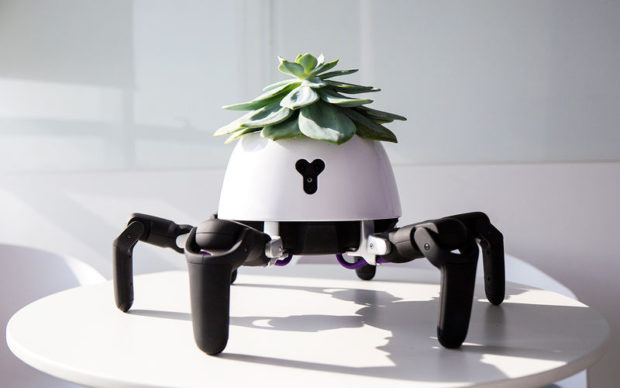 Tianqi got the idea for the Sharing Human Technology with Plants project from a sunflower exhibition where he noticed dead sunflowers near other plants and also observed how the plant could have survived if only it could move into the sun to get nutrients.

He replaced the original shell of the robot with a two-layer flowerpot large enough to hold a small succulent. Using sensors, the robot can move the succulent into the sun when needed. So with one of these, you will never kill your plant from lack of sunlight.

When the plant needs to be watered, the robot will even do a little dance to let you know. It is a very cool robot that could help anyone who has more of a brown thumb than a green one. Though it is a bit creepy to watch your plant walk around via six-legs. Good thing the plants and the robot can’t communicate or we would have some mobile plants taking over the world.