Somebody call Spider-Man, because I think we just spotted the Green Goblin! What you’re about to see is a jet-powered Flyboard Air being piloted at speeds up to 103.4 mph. This thing looks like a lot of fun. At least until something goes wrong and you nosedive toward the ground. I mean, there’s a reason this guy is wearing a parachute on his back. Luckily, he didn’t have to use it. 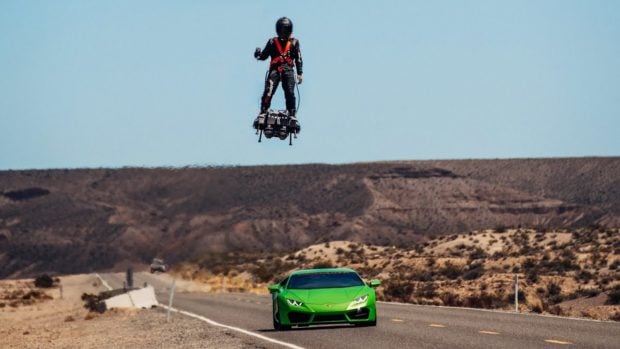 Imagine going this fast in a standing position, while in the air. It would be a scary ride, but super fun. You would feel like a God. You almost have to become the Green Goblin and start throwing pumpkins at Spider-Man and causing mayhem.

Seriously though, I would love to take a ride on this thing even if I would likely die upon landing. It would be quite an adrenaline rush on the way out, with jet engines strapped to your feet! Just the idea is nuts. We live in amazing times with some amazing gear, folks.

[via Geeks Are Sexy viaGeekologie]