Biomimicry is the art of making technology and robots that mimic attributes of real-life animals. Festo is all about biomimicry. Take a look at this eel-like robotic fish called BionicFinWave. It swims like a cuttlefish and is mighty creepy to behold. Its fins go from head to tail and the wave-shaped movement of the fins allows the faux-fish to push the water behind it, creating a forward thrust. Creatures with this design can also swim backward in this way. Pretty weird, huh? 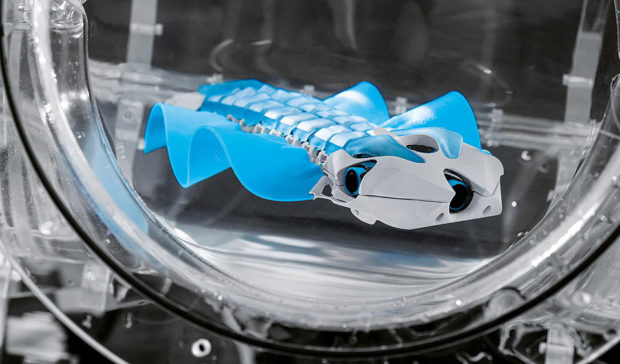 BionicFinWave can communicate wirelessly, transmitting sensor data, temperature, pressure, and more to researchers. It operates on the principle of a crankshaft, driven by servo motors, which facilitates the undulating fin movement. The robot is an experiment that allows them to see how this movement could serve as an effective propulsion mechanism.

It is effective alright, and is also eerily life-like. Why did they have to give it those creepy eyes? It already has a camera on the nose. Apparently, they want it to be as life-like as possible, not caring how it creeps out humans like me.