While most visions of the future envision robots as looking like humans, they certainly don’t have to be. The funky looking robot you see her was designed to compete in the DARPA Robotics Challenge. Centauro isn’t your typically humanoid design. It does have two arms, a torso, and a head, along with four legs with casters as “feet.” 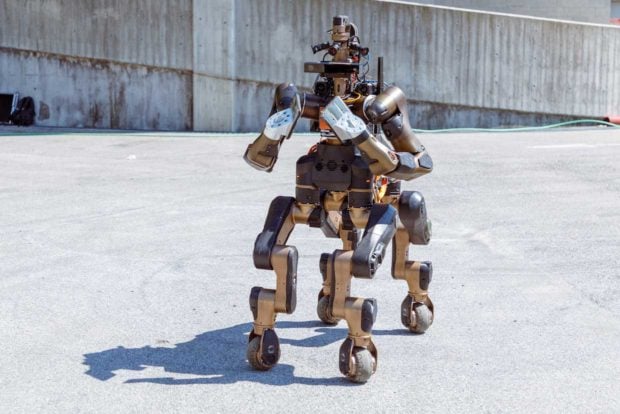 Those legs are key to the Centuaro’s prowess in the DARPA challenge as they each have six degrees of freedom. The legs can rotate the hips, knees, and angles and control the four-wheel modules individually. It can operate in a traditional quadruped configuration or in a spider-like configuration for stability when using tools.

The gold and black clad robot stands about 5 feet-tall, weighs about 205 pounds, and has enough battery power to run for 2.5 hours straight. Each of its arms is able to carry about 24 pounds. The gif above also shows that it can karate chop you in the head.