Check out these toy cars racing their hearts out. This race looks pretty intense, but these cars aren’t even technically racing. They are on a treadmill, and the belt is moving, not the cars. Still, if you look at the footage in Diego Jesus Asim’s treadmill racing videos for a little while it almost looks like a real race with the ground moving by fast underneath them. 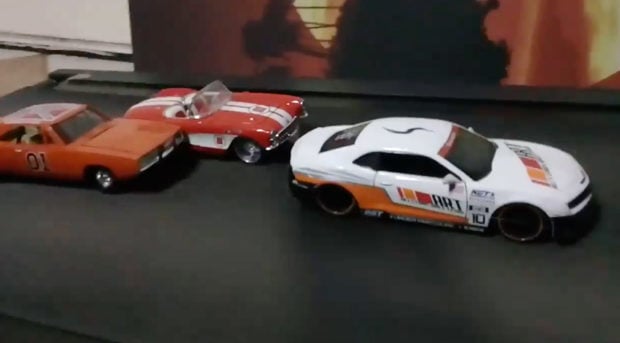 In order to keep them from flying off, he attached the cars to the front of the treadmill using clear tape. What’s cool is that there’s plenty of side-to-side action as they battle for position. This scene would look very real if they filmed it just right.

Treadmills? They are for so much more than exercising. Why shed pounds when you can have a kick-ass Hot Wheels or Matchbox car race? I’d rather be fat and happy than sweaty and exhausted anyhow. Am I right? Fine, I’ll go to the gym today.

If you watch the first race through until the end, you’ll be disappointed, because there’s no clear winner. I thought it would be the yellow car, but they are kind of all jumbled together at the end. I think there was a huge crash that got edited out, which sucks, because I would like to see that.