Finally, a Rubik’s Cube That Solves Itself

We’ve watched many a nerd solve a Rubik’s Cube in like 4 seconds flat and we’ve also seen our share of robots that can solve it quickly as well. But until now, a Rubik’s Cube has never been able to solve itself. Hell, humans can’t even solve themselves, which is why there are so many buttholes out there. This robotic Rubik’s Cube is filled with electronics and motors making it a puzzle that solves itself. Does this mean it’s alive? 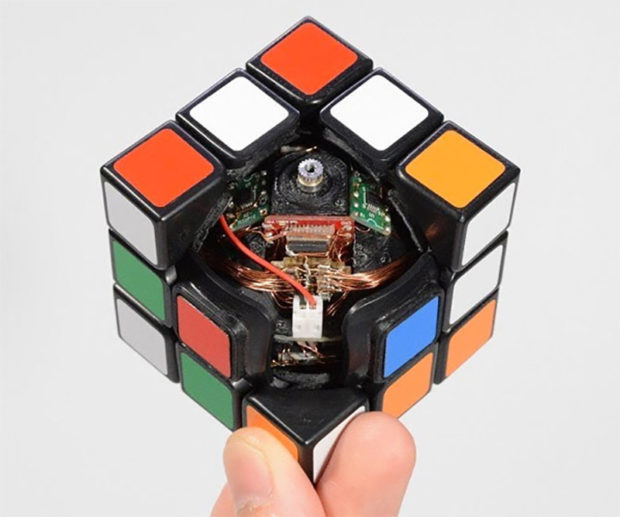 The self-solving cube needs no assistance – aside from a human messing it up before it starts. It was created by hardware hacker “Human Controller.” It can’t solve a puzzle that was pre-scrambled though – it just records the moves a human makes, then undoes them.

Despite the stuff crammed inside that creates the magic, it is the exact same dimensions as the cubes that you and I throw at the wall in frustration.

So how did he squeeze all of the electronics, motors, wiring, and batteries inside? Well, that called for a custom 3D-printed core, but and unique versions of the individual cube sections that can twist and rotate.

It’s pretty weird watching a Rubik’s Cube solve itself. This makes it much smarter than me. It may not be the fastest at solving the puzzle, but this thing IS the puzzle, so you can’t beat that really.

[via IEEE Spectrum via Gizmodo]