This Star Destroyer bicycle might just be the coolest Star Wars costume ever, especially if you have a kid that has Imperial leanings. Andrew Guy built this amazing costume for Halloween for his son Aidan. Hey, Andrew, I want one too! 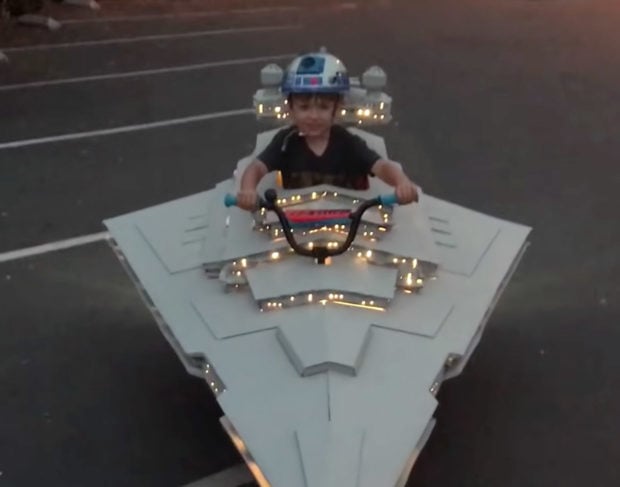 It took several months of planning and construction to get this bad boy ready, and as you can see it was totally worth the effort. The lights look insane, and it even has a hidden speaker that plays The Imperial March. Any kids dressed like Han Solo probably saw this thing coming and dropped their candy cargo. They say you shouldn’t do that at the first sign of Imperials but, this thing is intimidating coming up behind you. More candy for the Empire.

Not sure how he is supposed to get to people’s porches in this thing though. They probably just come to him since they fear that a Star Destroyer is going to shoot lasers at the house. I bet it’s nothing but a giant candy bag inside, which you need when you “wear” this costume because you are going to get ALL of the candy.