At last year’s New York Toy Fair, Jakks Pacific unveiled the toilet-paper shooting Skid Shot. It’s like toy blasters that shoot foam ammo, except this one shoots wadded-up spitballs using toilet paper. Good times. Mothers everywhere spent extra on toilet paper and had to clean it up from their walls. Well, for 2019, Jakks is releasing an improved version called the Sheet Storm that makes it even better. 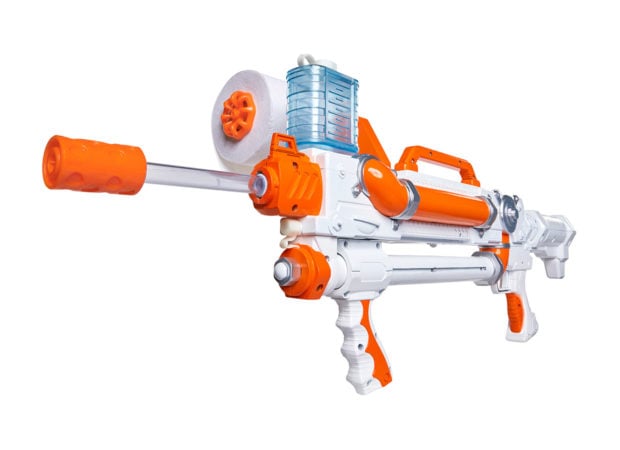 Shooting someone with soggy spitballs is a fun pastime. The only problem with the Skid Shot is that it used two separate levers that both had to be primed to prep the next shot. This gives your opponent plenty of time to avoid a direct hit. This has now been fixed. Costing $40, the new Sheet Storm will cost twice as much as the Skid Shot, but does away with the annoying dual levers of the original.

The new model uses a sliding, pump-action reload mechanism that primes the blaster in one-quick motion. A single roll of toilet paper will give you over 350 shots before its empty too. It also has a range of about 50 feet, so fire away!

The Sheet Storm toilet paper blaster will arrive this Fall.