One of the more memorable scenes in The Last Jedi was The Battle of Crait. Now someone has replicated the scene in LEGO form. That someone must be one of a handful people that actually enjoyed the movie. I know it wasn’t me. Still, this LEGO diorama is awesome. Builder David Hall did a great job on this super detailed diorama. 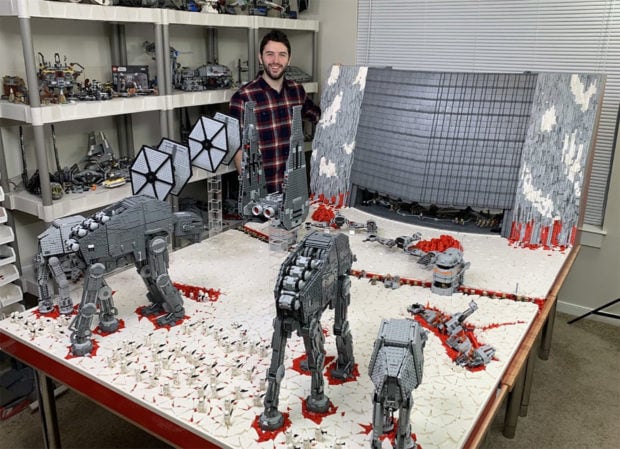 It took Hall around 13 months to complete this thing since it has over 100,000 LEGO pieces. The scene has a pair of highly-detailed First Order AT-M6s walking toward the resistance’s fortress, two AT-ATs, two TIE Fighters, and some First Order Stormtroopers, all led by Kylo Ren’s shuttle. I may not have liked the movie, but this is a LEGO masterpiece.

Hey @starwars this is my Battle of Crait, 100,000 bricks.. over 13 months to build! #legostarwars pic.twitter.com/sb6ZHIFdsI

Hall did a great job with the broken white salt plain with red ‘soil’ beneath, it looks really good. In fact, all of the details are really nice throughout this scene. The entire structure can broken down into eight smaller sections so that it can be transported easily, which is good because it will be at the BrickFair convention in March in Charlotte, North Carolina if you want to see it for yourself.

Hall has posted some week-by-week build videos on his YouTube channel, which are worth checking out too. Amazing build, David!

[via io9 via Mike Shouts]