Robots. Right now we make them do all kinds of crazy stuff and we point and say “cool” or we laugh, but just remember that laughter is going to turn to screaming in our near future. So anyway, here’s the latest thing a robot can do. Isn’t it neat? Yay! So cool. We are so screwed. 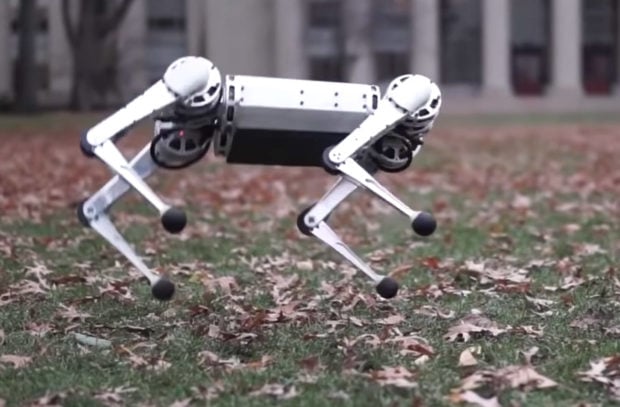 Scientists from the Biomimetic Robotics Lab at Massachusetts Institute of Technology (MIT) have created a smaller, 20-pound version of their hurdle jumping four-legged cheetah robot. Presumably this began with one of them saying, “Gentlemen, we can rebuild it” followed by some cool ’70s TV music and bionic sounds, but that is not confirmed.

The new robot can do something that no other four-legged robot has done yet. This mini-cheetah robot can do backflips. It’s pretty damn good at it too. The quadruped can bend and swing its legs wide, allowing it to walk either right side up or upside down. The robot can also walk over uneven terrain twice as fast as an average person’s walking speed. And thanks to those sweet backflips it can join the circus if it ever runs away from its jailers and make a living. Check out some of its moves in the video below:

I can’t wait for the parkour robots that are sure to follow.