Festo’s New Soft Robotic Arm Is Powered By Air, Bends Like a Worm

Check out this amazing new bendy robot arm developed by robotics manufacturer Festo. Somewhere, the Six Million Dollar Man is eyeing his new toy. The BionicSoftArm has pneumatically powered ‘muscles’ and is more flexible and lighter than other robotic arms. 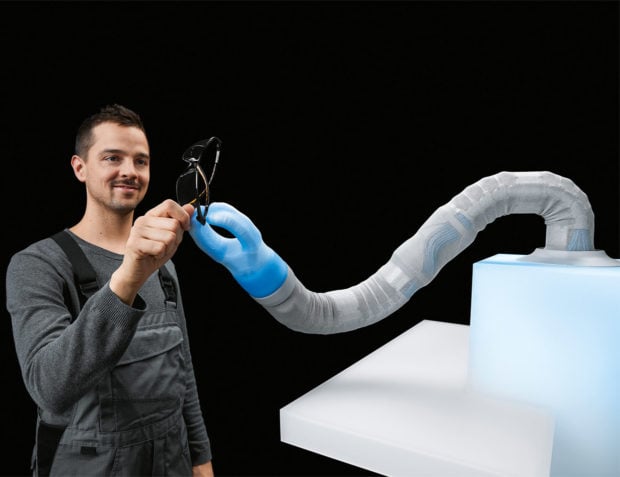 It can be used for a number of applications, thanks to its modular design. With various adaptive grippers, it can pick up and handle a wide variety of objects and shapes. Also, there is zero danger to the user even in the event of a collision. It boasts 7 degrees of freedom, and basically looks like a giant worm. The arm has come a long way from its previous designs as seen in the video.

Watch as this hand-worm grips apples with ease and hands it to a human. Well, drops it in their hand anyway. Watch as it sucks up a bunch of metal marbles and transfers them across the table. But what they didn’t show was it shaking the hand of a human. Probably because in their tests several humans walked away with one less hand. Or should I say ran away screaming as blood gushed everywhere. That’s why you don’t make robots white. They’re hard to clean.