YouTube channel AcademeG found a cheap Bentley Continental GT (are they ever actually cheap?) and created this monster off-road version. In this case it probably was cheap since it had so many problems with the engine. 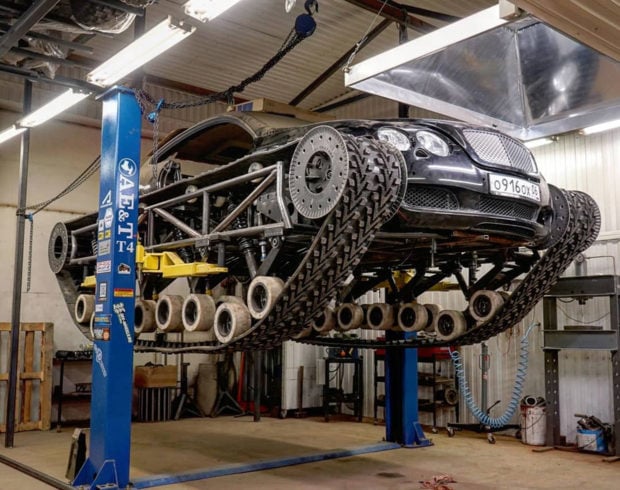 For starters, the luxobarge needed new turbos for the twin-turbo W12 engine. So the guys at Russian vlog AcademeG replaced the engine with a Japanese-market Toyota 4.3L V8 engine. Then they ditched the original Bentley frame and drivetrain. But what they did next makes them my personal heroes. The body was placed onto a custom frame with tank treads. They call it the Ultratank.

This thing is badass, although it does have some problems. The engine doesn’t like to operate at the low rpms that the treads prefer and it has issues cornering. Who cares? Just run over stuff in your rich people tank and stop complaining.

They do have a point though – if the vehicle corners too hard, the treads come off. Oh, and there are no brakes. To slow down you crank the steering wheel back and forth which slows the inside tread as the vehicle starts to turn. I can live with that. I just want to run stuff over. Check out the full Ultratank build log on YouTube.

[via Autoblog via Slashgear]