This McDonald’s Is Staffed by Bees

Sweden now has the world’s smallest McDonald’s restaurant. It may be tiny but it is packed with workers called drones, and has room to serve thousands of guests. They don’t make burgers and fries though. They have just one item on the menu: honey. That’s because it is filled with bees. 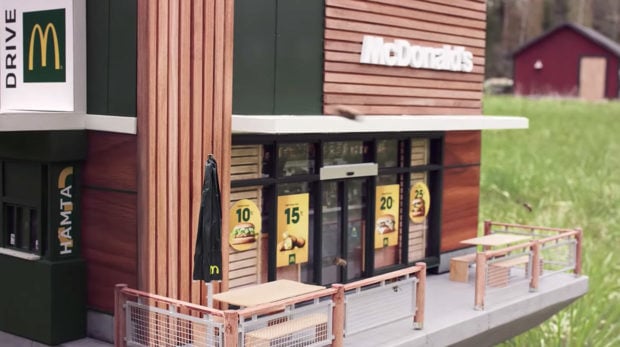 This fully-functional beehive is designed to look like a McDonald’s. I mean it looks exactly like the fast food restaurant, only in miniature. The McHive has all of the details of the real deal, including the iconic Golden Arches standing on the removable miniature rooftop, glass doors, full pane windows complete with promotional posters, railings, and even a couple of drive-thru windows.

Of course, now there’s going to be a Burger Queen beehive that opens up across the street and the competition is going to be fierce. I’ve been hearing a lot of buzz about it. Then there will be a Wendy’s, and before you know it Sweden is going to be overrun with fast-food beehives. Then the fattened-up bees and their miniature restaurants will take over the world, with no humans left to eat their honey.