Cassie Robot Tries on a Pair of “Hovershoes”

Bipedal robots are those that walk using two legs like humans do. The problem is that this isn’t always the fastest way to travel. That’s why humans developed wheeled transports like cars, bikes, roller skates, and even so-called “hoverboards.” Well, robots want to be just like us. Check out the Cassie bipedal robot riding around on a pair of hovershoes. 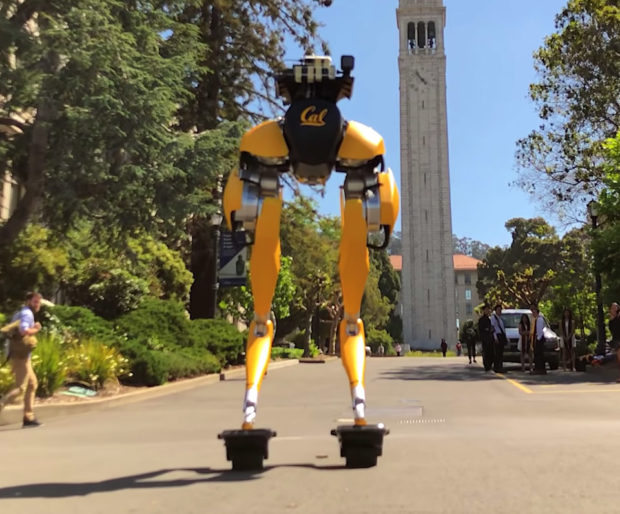 This was UC Berkeley’s Hybrid Robotics Lab’s idea. The team of researchers took a Cassie bipedal robot, named Cal, and placed it atop a pair of the self-balancing, wheeled shoes. Presumably, so it can chase us down during the apocalypse. Hovershoes are essentially a hoverboard, but split into two so you can wear one on each foot. The rider has to lean forward, backward or side to side to maneuver. They are pretty hard for most humans to use.

The researchers added a sensor to Cassie and successfully trained the robot to roll around the campus on the electric skates. That must have been a very crazy sight to see. Lucky for you, you can see it right here when they were testing it.

Pretty creepy stuff. Now teach it to ride a unicycle and play some flaming bagpipes. If it’s going to run down humans one day soon, it might as well look comical while doing it.

[via IEEE via Mike Shouts]