LEGO Sushi Conveyor Model: Everything Is Awesome with Wasabi

The only thing better than a good piece of sushi is one that comes delivered right to your face on a train, ready to eat. The sushi train is quite popular in Japan, but has also popped up in cities around the world in recent years. For those unfamiliar with the concept, it’s basically a conveyor belt that makes a loop from the kitchen into the restaurant, and in front of the sushi bar.

Patrons then grab as much food as they want from the conveyor – or send their order back for something they don’t see on the sushi train. At the end of the meal, the server tallies up the total of pieces you ate based on the color and number of plates in front of you, and you check out. Well a fan of both sushi trains and LEGO decided to make a brick-built tribute to this entertaining dining experience. 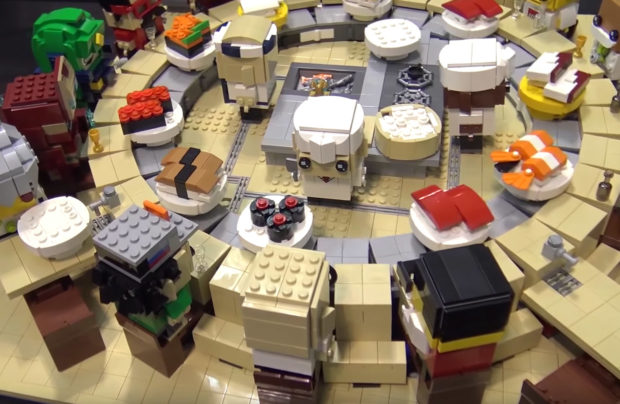 Beyond the Brick’s Joshua Hanlon was fortunate enough to stop by Japan Brickfest 2018 where he came across Dr. Peisan’s wonderful motorized creation, which doles out LEGO sushi dishes to tiny LEGO patrons. Check it out in action:

What a lovely little scene, with all the people sitting around enjoying some delicious fish, eggs, rice, seaweed, and wasabi as they go round and round. I appreciate that the builder used BrickHeadz style figures for each patron instead of Minifigs too. I think that gives them so much more character.

I love this adorable little construction. It makes me want to build one for myself – and it makes me hungry for sushi tonight. Seriously though, why can’t more meals be served this way?