If you’ve ever spent time in Japan, you know there’s a certain love for vending machines in the nation that seems unequalled by any other place. From the moment you touch down at Tokyo Narita airport, there are numerous vending machines by the gates. Most of them dispense innocuous stuff like energy drinks, but there are also machines around Japan that vend everything from pizza to corn on the cob if you know where to look for them.

J Dream’s miniature vending machines are the perfect desktop addition for anyone who enjoys making purchases from these coin-operated machines. 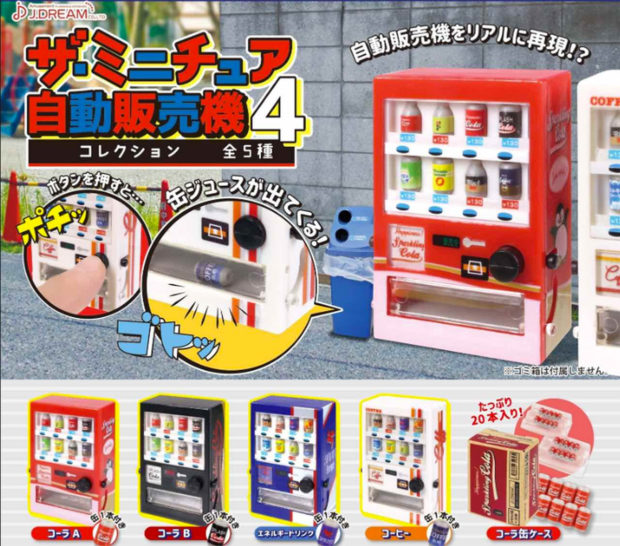 The set includes four tiny machines: a duo of cola dispensers, one that sells coffee cans, and another that vends energy drinks. You’ll also get a box filled with 20 teensy cola cans you can stick into backs of the the machines, and they’ll actually vend them when you push the button. You can check them out in action in the video below:

Ironically, these miniature vending machines were originally sold in Japan out of their famous Gashapon machines, which dispense a random assortment of toys in plastic capsules. The complete set is available from importer Japan Trend Shop for $33, or from Amazon Japan for about $25.