Ever since I saw a CO2 laser cutter in action at a maker space I visited, I always wanted to have one for my own workshop. The ability to cleanly cut and engrave materials with laser precision has all kinds of uses, from cutting out flat-pack models and puzzles, to adding logos and personalization to objects. But most of the more capable CO2 laser cutters on the market are expensive, difficult to use, and take up a lot of space.

The folks at FLUX aim to change that with their Beamo, a laser cutter/engraver that’s small enough to fit on a desktop, yet is powerful and versatile enough for pro-quality work. It’s also well-priced, with early bird orders on Kickstarter going for as little as $849. FLUX has a strong track record with its crowdfunded projects, having previously delivered on its well-rated Delta+ 3D printer. 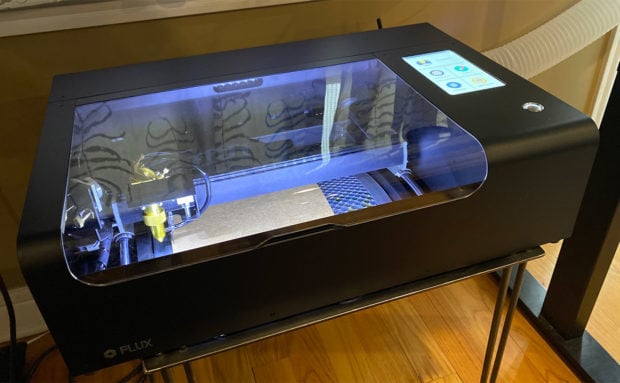 Measuring in at 24.21″ (w) x 17.52″ (d) x 6.97″ (h), and weighing 48.5 pounds, the Beamo is equipped with a 30-watt CO2 laser, which basically zaps high voltage across a glass tube filled with CO2 gas, producing a powerful beam from the end of its tube. The beam is then reflected using mirrors, and crisply focused using a lens, which narrows the beam down to about 0.2mm. The Beamo’s resolution is roughly 1000 dpi, and it can engrave at speeds up to 300 mm per second. 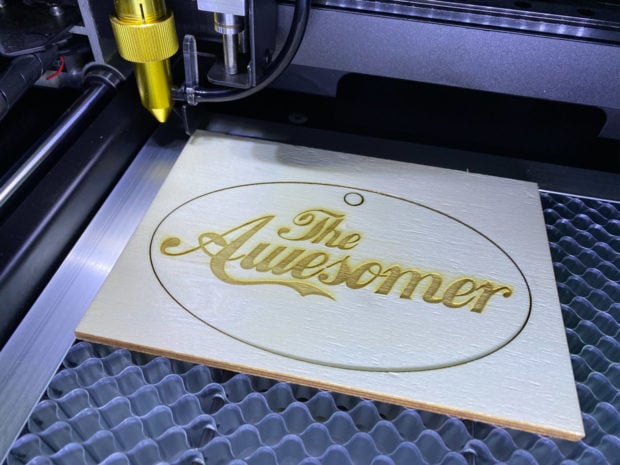 I was fortunate enough to get my hands on a pre-production Beamo, and I have to say that I’m very impressed. It took no time to get it set up and connected to my network, and within 10 minutes of opening the box, I had my first completed piece. Everything comes pre-assembled in the box – all you need to do is connect the Wi-Fi antenna (or an Ethernet cable), attach the vent hose to the back of the printer, and plug it in. You’ll definitely want to run that vent hose to a window, as it’s important to keep the fumes in your space to a minimum. 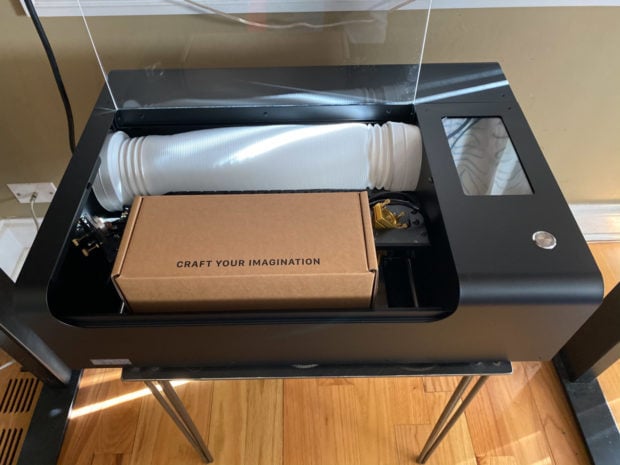 The Beamo can engrave a variety of different materials, including wood, cardboard, fabric, glass, acrylic, leather, stone, tile, and more. Cutting is limited to cardboard, paper, wood, acrylic, and other similar lightweight materials, with maximum thicknesses between 3mm and 5mm. There’s enough room inside the machine to handle objects up to 11.81″ by 8.27″ (300 x 210 mm), and as tall as 1.77″ (45 mm.) 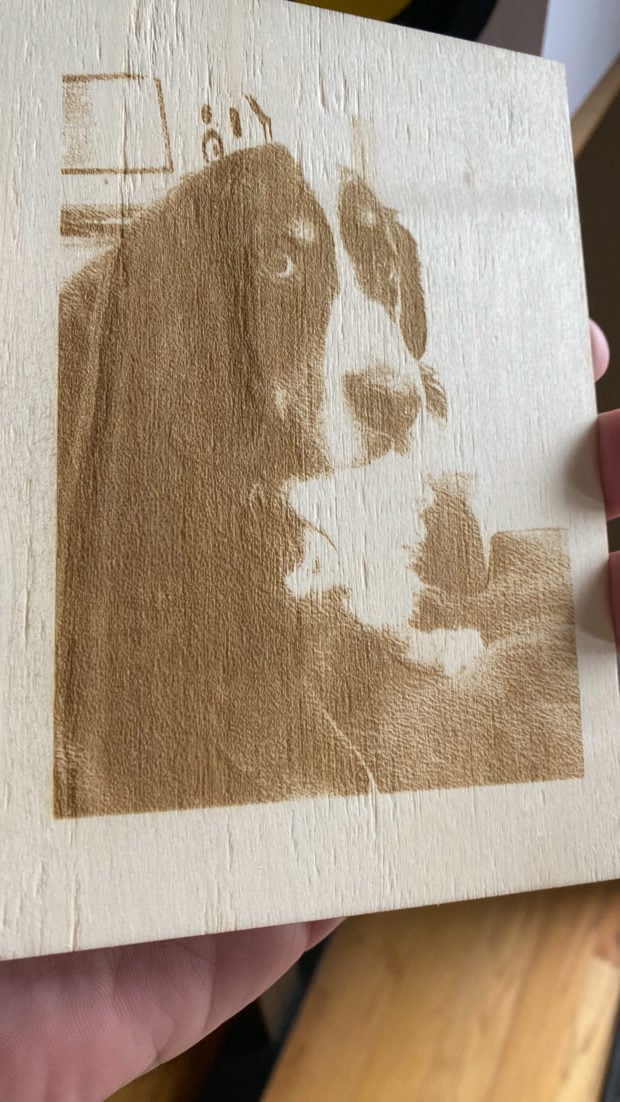 Preparing for a cutting or engraving job is as simple as placing your object on the ventilated surface, flipping down the plastic calibration clip on the head unit, then loosening the knurled knob on the laser head and adjusting it to the height of the object. This ensures a sharp beam focus. This manual adjustment process is easy and takes only a couple of seconds, though buyers can opt for an autofocus module, which also enables slightly deeper cuts in woods (up to 7mm.) That tool is currently bundled with a rotary module, which allows for engraving on curved surfaces, such as drinking glasses. 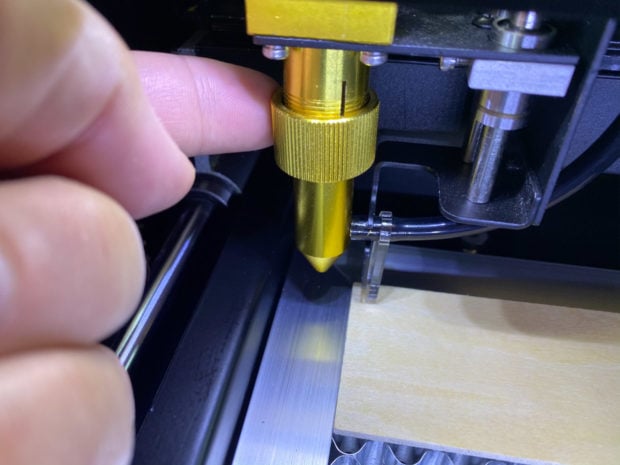 Working with the Beamo Studio desktop application is quite easy. It works on both Mac OS and Windows (I used the Mac version), and provides an intuitive interface for setting up your artwork. Since the Beamo has a built-in camera, you first use the Camera tool to preview your work piece, then you can start arranging your digital cutting files. The app works with SVG and DXF vector files, as well as JPG and PNG bitmap art. Vector files generally produce sharper images, but with a high enough resolution bitmap, the Beamo does just fine too. 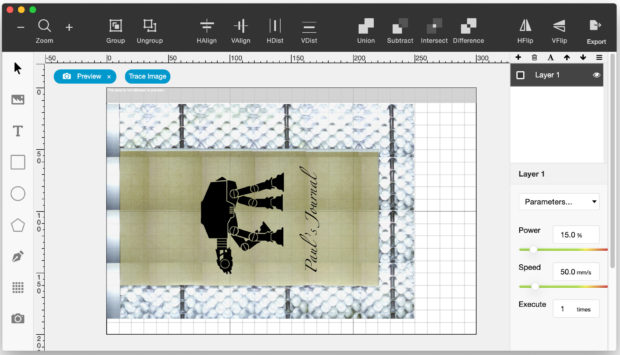 The software comes with presets for a variety of materials and job types, and you can create multi-layered jobs with different settings. For instance, you could import one layer with sharp vector lines, another layer with a bitmap shading, and yet another layer, and set it to cut an outline. This way you can create complicated objects in a single pass. FLUX also plans on releasing a mobile app which will allow users to snap photos, place them using the Beamo’s camera, then send them for output, but it hasn’t been released for review as of yet. 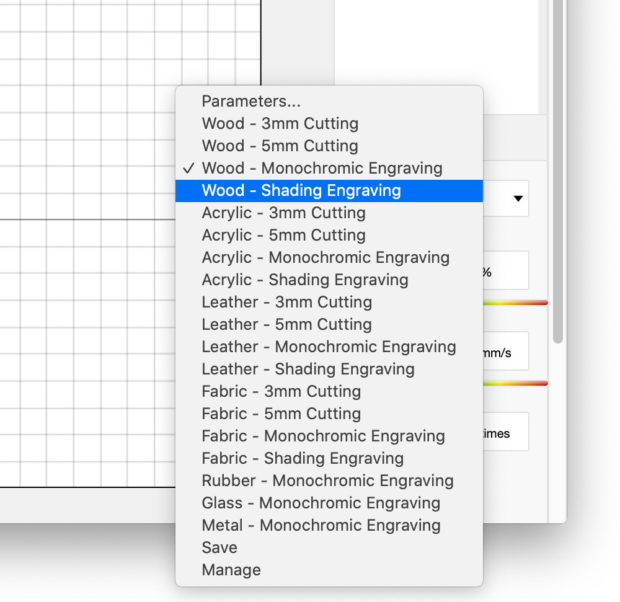 The Beamo made quick and precise work of the wood, paper, mirrored glass, and leather that I tested with, though the irregularities of leather cause some blurring that you don’t get in flatter and smoother materials like wood. For materials not listed, you might have to experiment on some scrap to get the power, speed, and repetition settings right. It also zoomed through 1/8″ acrylic sheets, leaving a beautifully flame-polished edge. 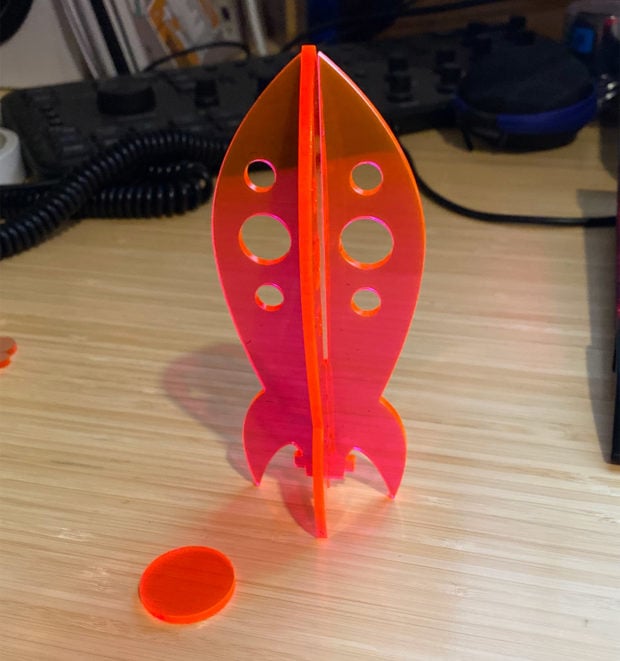 Be sure to avoid using certain plastics, foams, and adhesives with a laser cutter, as it can create toxic fumes or damage the machine.  Render times can vary dramatically depending on the material and complexity of job you’re outputting. Smaller jobs can take as little as a minute, while the most complex images I tested with took 20 minutes or so. 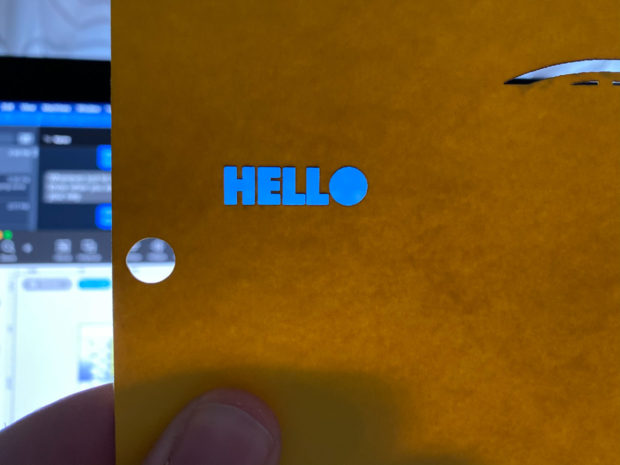 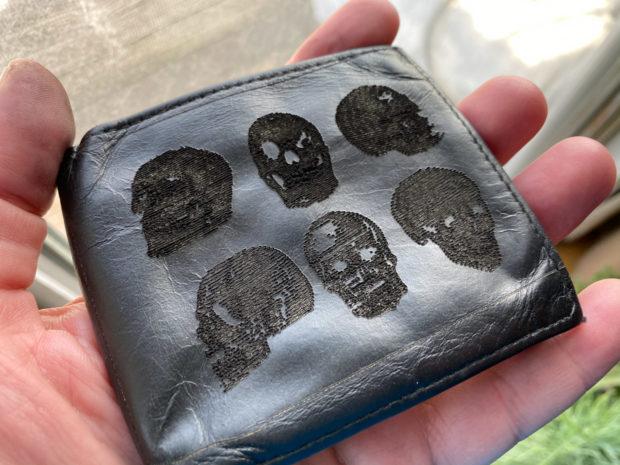 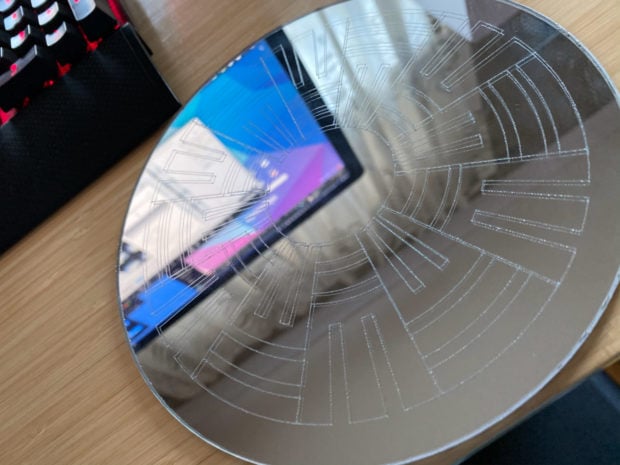 I cannot recommend the FLUX Beamo highly enough. It brings the power of CO2 laser cutting and engraving down to a size and price that many more people can afford, and unlike some crowdfunding projects, the hardware and software is ready for primetime. The Kickstarter campaign for the Beamo is running through Saturday, November 30, 2019 at 11:00 am Central Time, so if you want to get in on one of the earlier units and pre-release pricing as low as $849, now is the time. The expected MSRP is $1499, so this is a great deal. 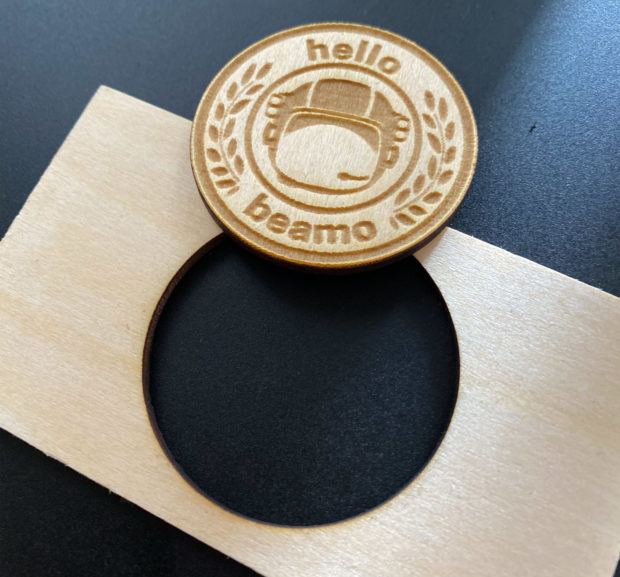 For those looking for a larger work area, FLUX is also readying the Beambox, which can work with objects as large as 15.7″ x 14.7″, and cuts material up to 10mm thick. That model is quite a bit more expensive, though, with prices starting at $2499.