Scientists will tell you that no human or animal can accurately predict an impending earthquake before it starts. However, certain animals are far more sensitive to seismic activities than humans. With that in mind, one seismologist has tossed out a wildly impractical but amusing idea for an early earthquake alert system – using cats. 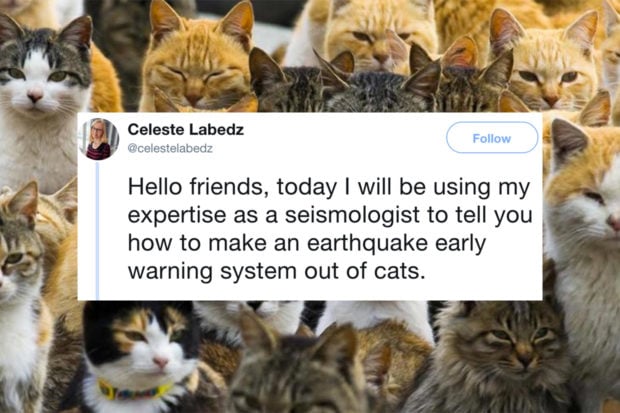 PhD geophysics student Celeste Labedz posted her idea in a multi-part Twitter thread last week, and it’s well worth a read. She hypothesizes that since cats are more sensitive than humans to the weaker P-waves that happen when an earthquake is starting, that we could harness unusual cat behavior to create an early warning system. The same idea could theoretically work with dogs, but they have a tendency to be more active than cats, which could result in more false positive readings.

Labedz proposes the name PURRS (Pet-based Urban Rapid Response to Shaking) for her system. The idea is that millions of cats would be equipped with Fitbit-style Bluetooth sensors, which would detect when kitties are acting abnormally. A centralized system would take that sensor data and look for common patterns among multiple cats in the area, and should a certain threshold be reached, it could issue an alert that an earthquake is imminent. Such a network would provide many more data points and density than current early warning systems, and way more cats.

Hello friends, today I will be using my expertise as a seismologist to tell you how to make an earthquake early warning system out of cats.

Celeste fully acknowledges that her idea would be incredibly difficult and costly to implement, but that’s why it’s merely a concept. I still love the idea of crowdsourcing pet-based data for something, since they do seem to be more sensitive to certain stimuli than humans.

Thanks to my rocket scientist friend Susan for tipping me off to this wonderfully entertaining thread.