As are many of you, I’m a huge fan of The Mandalorian. The Disney+ series is packed with great characters, tons of action and surprises, while still paying respects to the classic tropes of the Star Wars universe. One of the classic Star Wars vehicles to turn up in the show was the Jawas’ Sandcrawler, which made its debut in A New Hope. Now, a talented and resourceful maker has decided to build himself a workstation PC that looks just like the Jawas’ iconic land transport.

Jason Hurst loves building all kinds of things in his shop, but most of all has a passion for Star Wars stuff. His creations include everything from a wooden TIE fighter to a metal Slave One and Millennium Falcon. His Sandcrawler PC is definitely among his coolest projects. 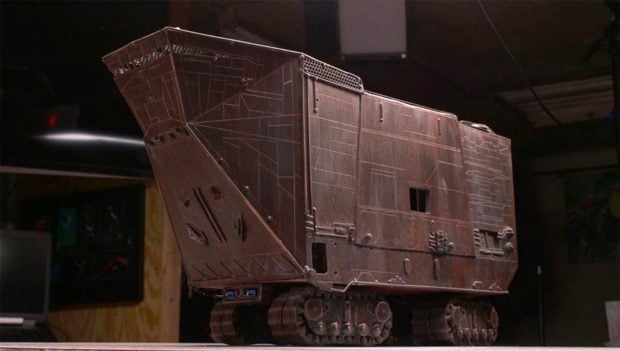 To build the PC, Jason first created a cardboard mockup of the Sandcrawler, then used the cutouts as templates for cutting sheets of steel. After that, he welded the case together, added on those big caterpillar tracks on the bottom, and embellished it with lots of hand-scribed details. He then spent about two days painting it to give it that rusty, weathered look. In all, it took him about a month of hard work.

Jason documented the build process in the video clip below, which is well worth a watch.

The Jawa Sandcrawler will be a fully functional gaming / productivity PC featuring an @amd Ryzen 9 3950x on a @aorus_official X570 motherboard. The CPU and gpu will be liquid cooled with @ekwaterblocks , low profile triple radiator and @noctua_at fans. It should be really powerful and quiet and possibly my most functional sculpture ever! #starwars #mandalorian #pccasemod #worksbyahurst #metalsculpture

Be sure to drop by Jason’s YouTube channel and Instagram page to check out his many other builds, and to keep up on his latest creations.