An orrery is one of those mechanical representations of the Solar System that rotates scale objects so you can see how they orbit each other. This LEGO orrery has none of that scale BS to deal with, and skips all planets but Earth, the flat center of the galaxy.

Still, this orrery was built entirely out of LEGO bricks, which makes it impressive. It’s quite satisfying to see mostly spherical objects made with flat, square bricks. 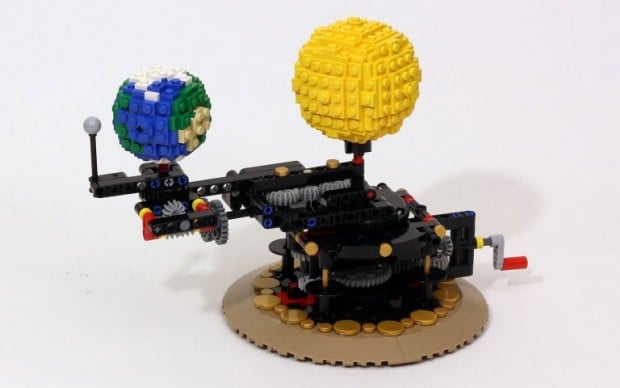 The movement uses a handful of LEGO gears and has a hand crank to make it spin, though it can also use a motor. Its builder, Jason of JKBrickWorks says that each rotation of the crank represents the passage of a day.

It’s close to accurate, but not quite. The Moon orbits the Earth every 28 days, the Sun makes a full rotation every 25 days, and the Earth orbits the sun every 375. The video explains how the mechanism works, and you can grab the full build instructions here.