You Could Empty This Cardboard Vending Machine with a Box Cutter

When it comes to unusual vending machines, Japan is the place that always comes to mind first. After all, this is the country that gave us machines that vend bananas and fried chicken. But this particular vending machine isn’t notable for what it vends, but what it’s made out of. 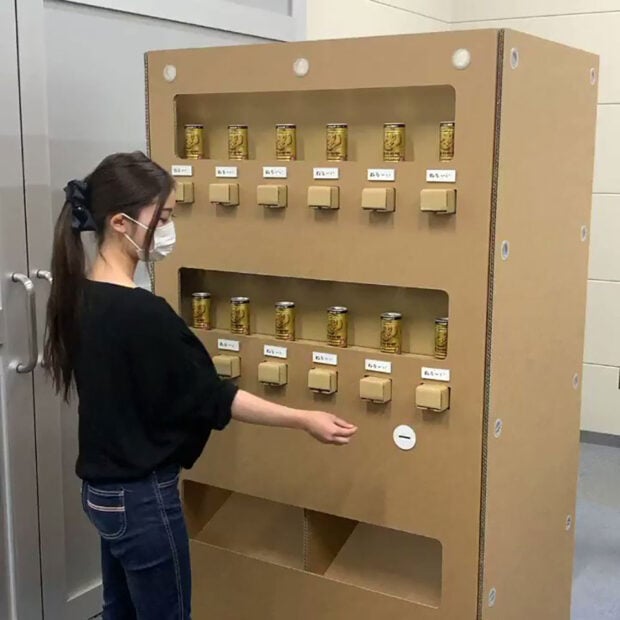 What you’re looking at is a full-size, working vending machine that’s made primarily out of cardboard. Like other vending machines, this one dispenses canned drinks, though it offers neither refrigeration, nor does it have a coin mechanism. Instead, it has a simple push button and rubber band system that causes drinks to drop into its tray. At least it doesn’t have those stupid spiral things that snack machines like to steal your purchases with. Though I do love it when you occasionally stumble onto someone else’s misfortune and get a two-for-one deal from those coils.

The machine is set up at the offices of cardboard box company Hacomo in Kagawa City, and you can check it out in action in the Twitter post below:

It’s a cool design for sure, but I don’t think it would last very long if a soda can exploded and sprayed all over the insides of this thing, or if someone went near it with an open flame. On the other hand, it’s probably much easier to move around than a regular vending machine, and wouldn’t kill you if it fell onto you while shaking it.

If you like the idea of a cardboard vending machine, Hacomo makes a miniature desktop version that’s available for about $9 on Amazon Japan.