This Tiny Robot Beetle Runs on Methanol Instead of Electricity

When it comes to robots, most of them are powered by batteries or plug-in electricity, which in turn drive servos or other motors. But if you’re trying to build insect-sized robots, it’s tough for them to get around them without an external power source. Now, engineers have come up with a bug-sized robot that runs on methanol instead. 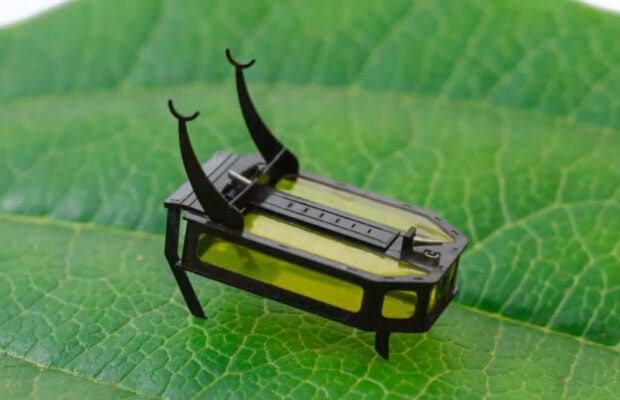 The specific energy stored in fuels like methanol is significantly higher than that of batteries, which means you need less of it to go just as far. With that in mind, Xiufeng Yang, Longlong Chang, and Néstor O. Pérez-Arancibia from the University of Southern California developed a tiny robot which can carry its own fuel, while keeping its size and weight down to something much closer to that of an actual insect. The robot beetle, aka “RoBeetle” measures just 15mm, weighs just 88mg, and can carry roughly 2.6 times its own weight.

This little dude ambles along using a catalytic artificial muscle that can flex and transmit movements to a leaf spring, which in turn moves its legs. Most of RoBeetle is made from carbon fiber, along with polyimide film, which are both very lightweight materials. Its musculature is made using nitinol, a metal that has a sort of “shape memory” depending on whether its hot or cold. That nitinol wire is covered with platinum black, which works as a catalyst for the fuel, causing it to combust and heat up, causing the wire to flex. An secondary mechanism captures methanol vapor on opposite strokes causing the nitinol to cool and resetting the system. The resulting oscillation between its two states drives the robot forward. This method of locomotion is extremely efficient, allowing the RoBeetle to walk for hours between refuelling.

There are some limitations to the current design, which only allows RoBeetle to move forward in a straight line, though you would think by creating separate fuel cells for backwards, left, and right motions would be feasible. While this approach makes sense for keeping weight and size down for miniature robots, I wonder if a similar approach could be used for larger robots.

[via Science Robotics via IEEE Spectrum]